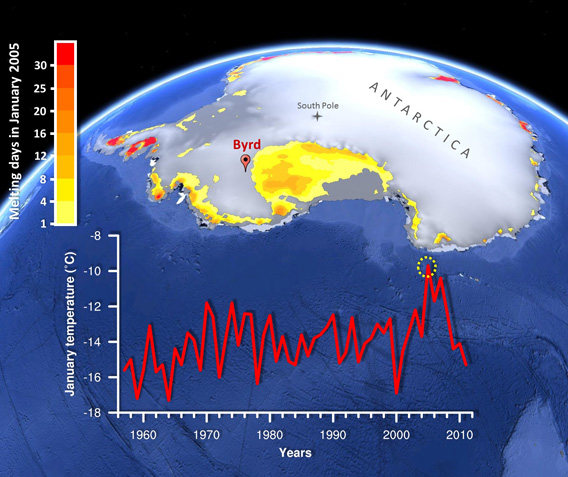 Top: a map of Antarctica showing the extent of surface melting in January 2005 observed from space. Bottom: Time series of mean January temperature at Byrd Station from 1957 to 2011 with the warm January 2005 highlighted with a yellow circle. The study by Bromwich and colleagues suggests that such exceptional melting events as in January 2005 could become more frequent in the future. Credit: background map from Google Earth; satellite observations of surface melting courtesy of G. Picard (LGGE)

The West Antarctic Ice Sheet is warming twice as fast as previously believed, spurring new concerns about broader melting in Antarctica and associated sea level rise, according to a new study published in the journal Nature Geoscience.

The research is based on the complete construction of the temperature record for Byrd Station, a research facility in central West Antarctica. Until now the station’s record had been spotty due to frequent power outages during the long polar night when there isn’t enough sunlight to recharge the facility’s solar panels. The new record shows that the average annual temperature has increased 4.3 degrees Fahrenheit (2.4 degrees Celsius) since 1958, a rate three times faster than the global average temperature rise.

The findings suggest that West Antarctica is one of the fastest-warming places on earth, putting its ice sheet at risk.

“Our record suggests that continued summer warming in West Antarctica could upset the surface mass balance of the ice sheet, so that the region could make an even bigger contribution to sea level rise than it already does,” said David Bromwich, the study’s lead author and a professor of geography at Ohio State University. “Even without generating significant mass loss directly, surface melting on the WAIS could contribute to sea level indirectly, by weakening the West Antarctic ice shelves that restrain the region’s natural ice flow into the ocean.” 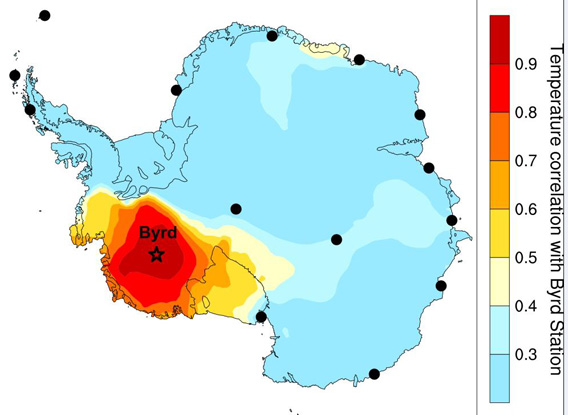 Researchers at Ohio State University and their colleagues have discovered that the central region of the West Antarctic Ice Sheet (WAIS) is experiencing twice as much warming as previously thought. Their analysis of the temperature record from Byrd Station (indicated by a star) sheds some light on temperature changes over a broad portion of the WAIS. This site provides the only long-term temperature observations in the region, far away from the permanent research stations with long-term temperature records (indicated by black circles) that are scattered around the continent – making a case, the researchers say, for a more robust network of meteorological observations on the WAIS. On this map, the color intensity indicates areas around Antarctica that are likely experiencing comparable warming to Byrd Station. Credit: Julien Nicolas, courtesy of Ohio State University

The authors don’t weigh in on the underlying driver of rapid warming in West Antarctica. Instead they recommend expanding the network of temperature stations in the region.

“West Antarctica is one of the most rapidly changing regions on Earth, but it is also one of the least known,” said Bromwich. “Our study underscores the need for a reliable network of meteorological observations throughout West Antarctica, so that we can know what is happening—and why—with more certainty.”

The paper comes just two weeks after a landmark study published in the journal Science concluded that all the world’s major ice sheets—save one—are shrinking and that ice loss is speeding up. That study—which involved 47 authors—settled some of the uncertainty surrounding ice sheet loss at both poles by combining three different ways that experts in the past have studied polar ice loss, including imagery from ten different satellites.