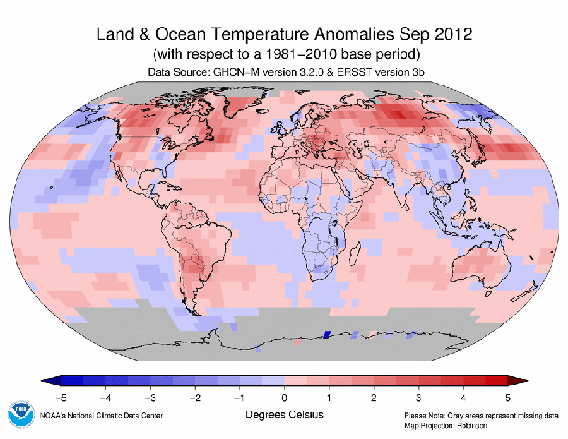 September 2012 temperatures as compared to 1981-2010 baseline. Graph courtesy of NOAA. Click to enlarge.

September 2012 tied with 2005 for the warmest on record around the globe, according to new data released by the National Oceanic and Atmospheric Administration (NOAA). The average land and ocean temperature was 16.27 degrees Celsius (61.31 degrees Fahrenheit) for this September, 0.67 degrees Celsius (1.21 degrees Fahrenheit) above the 20th Century average for the month. Shockingly, this is the 331st month in a row that has been above the 20th Century average.

The NOAA says that temperatures have been steadily on the rise this year as La Niña conditions faded around February. Currently we are in a neutral phase, bordering on an El Nino.

“If this warmth continues through the end of the year, 2012 will surpass 2011 as the warmest La Niña year since the Climate Prediction Center began monitoring ENSO conditions in 1950,” reads the NOAA report.

To date (from January through September) 2012 is the eighth warmest year on record with data going back to 1880. How 2012 measures up in total depends on global temperatures through the rest of the year. Currently, data sets show 2005 and 2010 as the warmest years on record.

Global temperature have risen by around 0.8 degrees Celsius (1.44 degrees Fahrenheit) over the past century due to anthropogenic climate change. Greenhouse gas emissions worldwide, which trap heat in the atmosphere, continue to rise despite decades of attention to the crisis.

(10/04/2012) The hour-and-a-half long debate between President Barack Obama and ex-governor Mitt Romney last night ended without a single reference to climate change. Frustrated with the lack of discussion on the issue from both candidates, environmental activists sent a petition with over 160,000 signatures to debate moderator, Jim Lehr, urging him to ask a question about climate change. The petition fell on deaf ears.

Fourth warmest July yet around the world

(08/20/2012) Last month was the fourth warmest July in the record books going back to 1880 worldwide, according to new data released by the National Oceanic and Atmospheric Administration (NOAA). It was notably warmer in the Northern Hemisphere than in the South: the month was the warmest July ever in the North. Worldwide temperatures were 0.62 degrees Celsius (1.12 degrees Fahrenheit) above the 20th Century average.