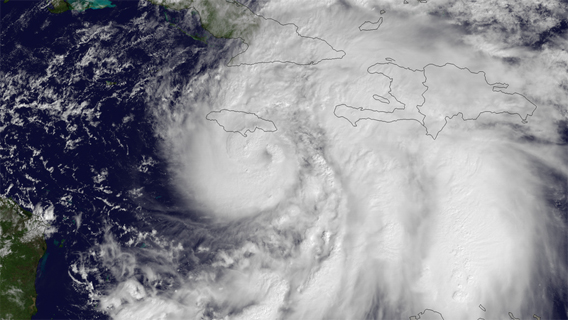 Hurricane Sandy near Jamaica. Sixty-nine people were killed in the Caribbean from the storm to date. Photo by: NOAA.

While scientists are still debating some fundamental questions regarding hurricanes and climate change (such as: will climate change cause more or less hurricanes?), there’s no debating that a monster hurricane is now imperiling the U.S. East Coast. A few connections between a warmer world and Hurricane Sandy can certainly be made, however: rising sea levels are likely to worsen storm surges; warmer waters bring more rain to increase flooding; and hotter temperatures may allow the hurricane to push both seasonal and geographic boundaries.

“The sea surface temperatures along the Atlantic coast have been running at over 3C above normal for a region extending 800km off shore all the way from Florida to Canada. Global warming contributes 0.6C to this,” writes climatologist Kevin Trenberth in an article today in The Conversation. “With every degree C, the water holding of the atmosphere goes up 7%, and the moisture provides fuel for the tropical storm, increases its intensity, and magnifies the rainfall by double that amount compared with normal conditions.”

In other words, one of the main contributing factors to why Sandy has become so potentially destructive is because Atlantic Coast waters have a fever this fall: 3 degrees Celsius (5.4 degrees Fahrenheit) above average. As Trenberth points out, a portion (20 percent) of this temperature rise is directly attributable to climate change. These warmer waters off the coast of the Atlantic have also increased water vapor significantly, allowing the monster storm to produce more rainfall than it would have if the waters were cooler.

In addition, climate change has globally caused sea levels to rise by about 0.6 to 1 millimeter every year due both to melting ice and warmer water expansion. But the sea level rise has been even more pronounced of the U.S. east coast. A study from this summer found that sea levels in the region have been rising on average 2 to 3.8 millimeters a year during the last sixty years, cumulatively, that’s around 5-9 inches. Scientists are as yet unsure why sea levels are rising faster in the East Coast than elsewhere, but higher sea levels means more severe storm surges and a much greater possibility of catastrophic flooding.

Finally warmer temperatures in the ocean and atmosphere could be changing hurricane season and paths. Warmer weather in the north allows hurricanes to travel further than they usually would, while hotter seasons increase the chances of October hurricanes on the eastern seaboard, once a rarity. 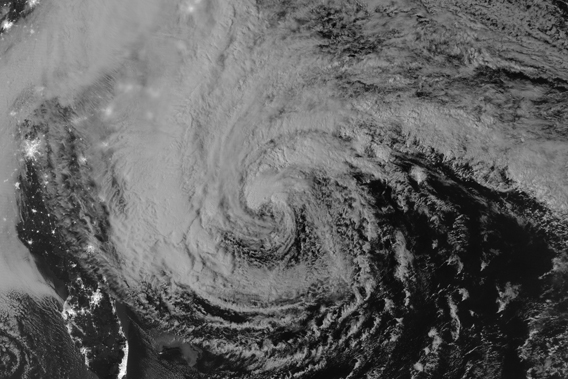 (08/09/2012) The National Oceanic and Atmospheric Administration (NOAA) raised its estimate of the number of storms that will likely form during this year’s Atlantic hurricane season.

(06/17/2009) Government officials and scientists released a 196 page report detailing the impact of global warming on the U.S. yesterday. The study, commissioned in 2007 during the Bush Administration, found that every region of the U.S. faces large-scale consequences due to climate change, including higher temperatures, increased droughts, heavier rainfall, more severe weather, water shortages, rising sea levels, ecosystem stresses, loss of biodiversity, and economic impacts.

Powerful hurricanes may be getting stronger due to warmer seas

(09/03/2008) Warming climate is causing the strongest hurricanes to strengthen and more moderate storms to stay the same, claims a new study published in Nature. However the data on which research is based is already facing fierce criticism.

(06/24/2008) 69 percent of Floridians believe that parts of the state’s coasts may need to be abandoned due to rising sea levels over the next 50 years according to a new survey conducted by researchers at Yale University and the University of Miami.

(05/18/2008) Global warming will produce fewer Atlantic hurricanes, according to a study published today in the journal Nature Geoscience by a U.S. government meteorologist.