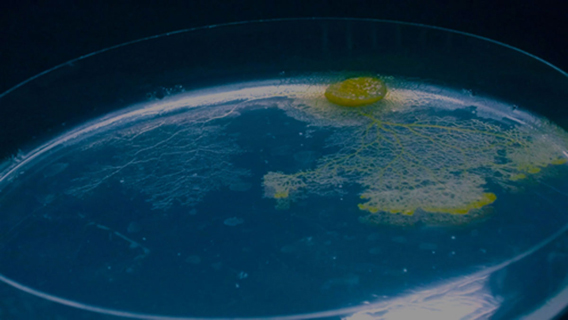 The yellow slime mold Physarum polycephalum exploring a petri dish. Slime deposits to the left of the image tell the slime mold where it has previously explored. Photo by: Audrey Dussutour.

How do you navigate space efficiently without a brain? Slime, according to a surprising new study in the Proceedings of the National Academy of Sciences (PNAS) of a brainless slime mold named Physarum polycephalum. Scientists at the University of Sydney have discovered that the mold secretes slime as an ‘external spatial memory’ to make sure it doesn’t end up going around in circles.

“Our data show that spatial memory enhances the organism’s ability to navigate in complex environments,” the researchers write.

“As it moves, the [slime mold] leaves behind a thick mat of nonliving, translucent, extracellular slime,” the scientists write, adding that when the mold is foraging it “strongly avoids” areas covered it in its own slime.

To test how its slime might be related to movement, the researchers began with a Y-shaped trap including food at the end of each branch. They found that when one end was covered with a slime mat, 39 out of 40 molds avoided that branch and went the other way. In other words, the mold almost always avoided going back over areas that were already covered in its slime. The scientists refer to this as a “choice,” since the mold will in fact traverse these areas again, but only if it has no other option.

“The slime mold’s behavioral response strongly suggests that it can sense extracellular slime upon contact, and uses its presence as an externalized spatial memory system to recognize and avoid areas it has already explored,” the researchers write.

External memory may sound like an oxymoron, but scientists have found that ant pheromones are another kind of external memory. Ants deposit chemicals containing important bits of information that they or other ants will encounter later, much like how humans use sticky notes to remind themselves of important tasks such as ‘clean the fridge’ or ‘call the doctor.’ The slime mold does something similar, only containing less information; its as if it leaves a sign behind saying, ‘you’ve already been here.’ One could think of this like Theseus trailing thread behind him in the Minotaur’s maze so he knew which way he had come.

Next, the researchers sought to test just how effective the slime mold’s behavior was increasing its navigational efficiency by setting up a U-shaped trap that is commonly used to test robots. At one end of a petri dish they placed attractive food that could be sensed by the slime mold, but this was blocked by a wall in a U-shape facing the mold. If the petri dish was coated in a slime mat prior to the test, the scientists found that the mold would take almost 10 times longer than if the petri dish was clean. In other words, the presence of the slime mat masked the mold’s ability to use its external memory properly, significantly decreasing the molds ability to quickly navigate around the U-shape wall keeping it from the food. When the petri dish was clean not only was the slime mold quicker at reaching the food, but it often tracked close to the most efficient route around the walls.

“Even an organism without a (central) nervous system can effectively navigate complex environments,” the researchers write.

They conclude that the study provides “strong support” that external spatial memory, such as chemicals deposited by ants or slime by a mold, was “the first step toward the evolution of memory in organisms with more sophisticated neurological capabilities than our slime mold.”