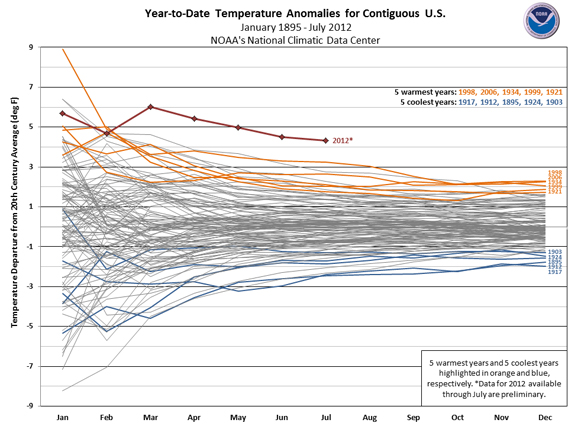 Year-to-date temperature, by month, for 2012 (red), compared to the other 117 years on record for the contiguous U.S., with the five ultimately warmest years (orange) and five ultimately coolest years (blue) noted. Graph courtesy of the NOAA. Click to enlarge.

Last month was not only the hottest July in U.S. weather history, but the hottest month ever recorded in the contiguous U.S, besting a record struck in July 1936 during the Dust Bowl, according to new data from the National Oceanic and Atmospheric Administration (NOAA). The average temperature last month over the contiguous U.S. was 77.6 degrees Fahrenheit, or 3.3 degrees Fahrenheit above the 20th Century average. Making matters worse, crippling drought continued to spread over 63 percent of the lower 48 states.

Last month also marked the fourth time in a row where the past 12 months have been the hottest in the U.S. The streak, which began in April 2012, has been bested every month since with August 2011-July 2012 now the new record holder.

July 2012 was also notable for wildfires in the U.S. In total, 9,869 wildfires were documented, the 5th most ever, which burned just over 2 million acres, the 4th most ever.

Temperatures in the U.S., which makes up only 2 percent of the world’s landmass, should not be seen as a proxy for global climate change. Instead, it should be noted that climate change is having an impact regionally.

“By itself this is not such a major feat, but the fact that the first seven months of the year is the hottest on record is much more impressive from a climate standpoint, and highlights the fact that there is more than just natural variability playing a role: global warming from human activities has reared its head in a way that can only be a major warning for the future,” Kevin Trenberth, a climatologist at the National Center for Atmospheric Research in Boulder, Colorado, told Live Science. “No, it won’t be like this next year, but these conditions will likely occur somewhere else. And the odds of them occurring in the U.S. have increased.”

“We can say with high confidence that such extreme anomalies would not have occurred in the absence of global warming,” the researchers wrote.

Globally, temperatures have risen around 0.8 degrees Celsius (1.44 degrees Fahrenheit) since the late Nineteenth Century. However this hasn’t happened uniformly, some regions, like the Arctic, have warmed to a much greater degree than others. Worldwide, the past decade (2000-2009) was the warmest on record, while 2010 and 2005 are generally considered tied for the warmest year. In fact, the Earth hasn’t experienced a single year below the 20th Century average since 1975. 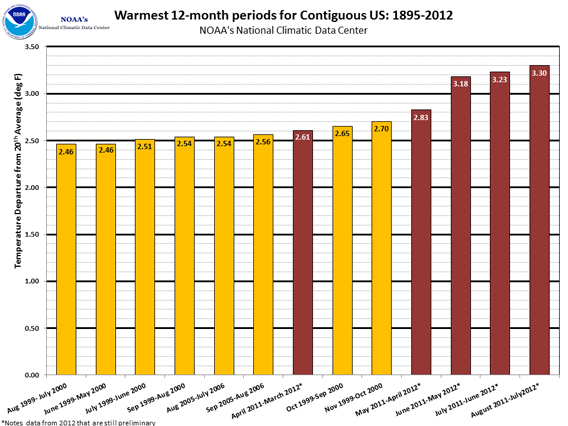 The ten warmest 12-month periods of the U.S. record. Not all of them have occurred since 2000. Graph courtesy of the NOAA. Click to enlarge.