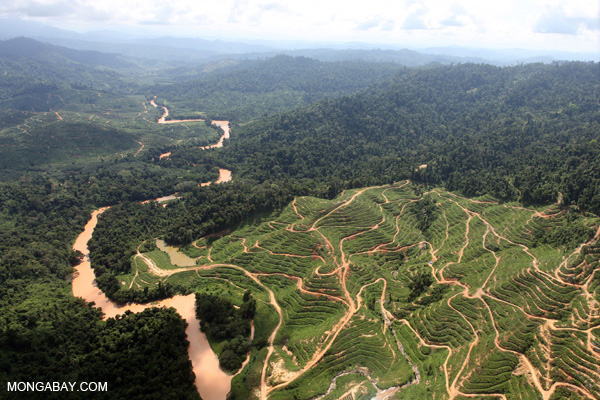 Deforestation for oil palm plantations in the Malaysian state of Sabah on Borneo. Photo by: Rhett A. Butler.

As of today, August 22nd, humanity has overshot the world’s annual ecological budget, according to the Global Footprint Network, which tracks global consumption related to resource availability and sustainability. The organization looks at a variety of data including the world’s fisheries, forests, agriculture, mining, and greenhouse gas emissions, but not fresh water.

Since the 1970s, global society has been consuming resources at a faster rate than Earth’s ecosystems can replenish them, leading to an ecological debt that increases annually.

“From soaring fossil fuel prices to crippling national debts partly due to rising natural resource prices, our economies are now confronting the reality of years of spending beyond our means,” Mathis Wackernagel, President of Global Footprint Network, explains in a statement, comparing ecological debt to financial debt. “If we are to maintain stable societies and productive lives, we can no longer sustain a widening budget gap between what nature is able to provide and how much our infrastructure, economies and lifestyles require.”

Currently we are consuming the equivalent of 150 percent of Earth’s ecological production every year. Some nations, of course, consume more than others; for example if everyone consumed like the average American we would need four Earths to be sustainable.

“Now is the time to come up with ways of running our economies that will continue to work into the future,” Wackernagel said, connecting the current financial crisis to the largely-ignored ecological one. “Long-term recovery will only succeed if it occurs along with systematic reductions to our demand on resources and ecosystem services.”

(06/20/2012) As world leaders head to Rio de Janeiro for the UN Summit on Sustainable Development, environmental and poverty groups are denouncing the last-minute text agreed on by dignitaries as “pathetic,” (Greenpeace), a “damp squib” (Friends of the Earth), “a dead end” (Oxfam), and, if nothing changes, “a colossal waste of time” (WWF). “We were promised the ‘future we want’ but are now being presented with a ‘common vision’ of a polluter’s charter that will cook the planet, empty the oceans and wreck the rain forests,“ the head of Greenpeace, Kumi Naidoo, said. “This is not a foundation on which to grow economies or pull people out of poverty, it’s the last will and testament of a destructive twentieth century development model.”