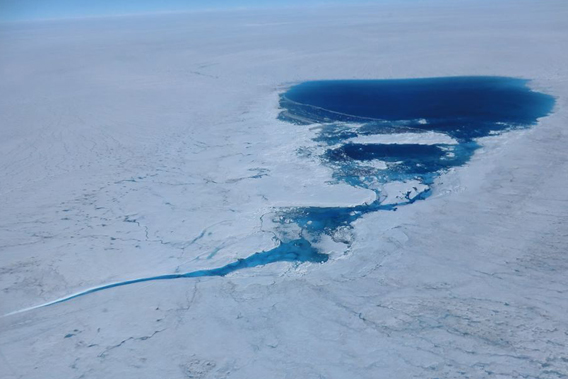 A supraglacial lake over the Greenland ice sheet in the Kangerlussuaq area at 1500 m elevation photographed on July 21, 2012. The lake feeds a stream that will deliver meltwater to the low elevations where it will either flow to the ocean on the surface or it will dive into the ice to contribute to the development of the englacial hydrological system. Photo by: Marco Tedesco.

Four weeks before Greenland’s melting season usually ends, it has already blown past all previous records. By August 8th, nearly a month before cooler weather usually sets in around the world’s largest island, the island toppled the past record set in 2010.

“With more yet to come in August, this year’s overall melting will fall way above the old records. That’s a goliath year—the greatest melt since satellite recording began in 1979,” said Earth and atmospheric scientist Marco Tedesco in a press release.

Tedesco measures the melt in Greenland using microwave satellite sensors, whereby he’s able to track both the total area melting and the number of days.

“That event was exceptional in the sense that it was an extremely rare event,” says Tedesco. “Imagine Rio de Janeiro under a layer of snow and you get the idea.”

He notes that while the melt was dramatic, much of the water would not have reached the sea, but instead refroze after a few days.

“We have to be careful because we are only talking about a couple of years and the history of Greenland happened over millennia,” Tedesco notes. “But as far as we know now, the warming that we see in the Arctic is responsible for triggering processes that enhance melting and for the feedback mechanisms that keep it going. Looking over the past few years, the exception has become part of the norm.”

Climate change has warmed the Earth on average 0.8 degrees Celsius (1.44 degrees Fahrenheit) since the early Twentieth Century, a trend that’s expected to continue. However, the Arctic is warming faster than anywhere else on Earth, creating much more visible and dramatic change than in other parts of the world so far. Greenland is a focal point because the melting of its vast ice sheet could raise sea levels catastrophically.

(08/06/2012) As the world experiences record heat, increased drought and fires, unprecedented ice melt and similar extreme weather anomalies decades before expected, climatologists have been forced to reconsider previous climate change projections and research techniques. Less than a decade ago, scientific consensus considered warming of more than 2 C and atmospheric levels of carbon dioxide near 450 parts per million (ppm) as acceptable or “safe”. Revised climate science literature and expert opinion now regard safe atmospheric levels of carbon dioxide as below 350 ppm, or less than 1 C rise in average planetary temperature. Many researchers and environmentalists, however, recognize that the present deviation from pre-industrial temperatures of 0.8 C may be unacceptable to prevent runaway climate change and widespread disasters.