Fourth warmest July yet around the world 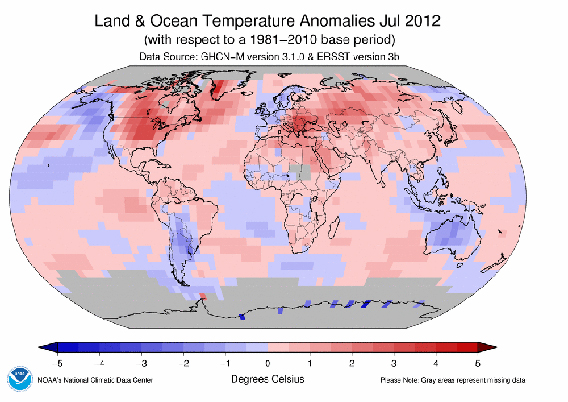 Last month was the fourth warmest July in the record books going back to 1880 worldwide, according to new data released by the National Oceanic and Atmospheric Administration (NOAA). It was notably warmer in the Northern Hemisphere than in the South: the month was the warmest July ever in the North. Worldwide temperatures were 0.62 degrees Celsius (1.12 degrees Fahrenheit) above the 20th Century average.

“This is the fourth month in a row that the Northern Hemisphere has set a new monthly land temperature record,” the NOAA State of the Climate notes in their analysis.

With the new data in, the year is currently the tenth warmest to date. 2012 began with La Nina conditions subsiding and neutral conditions returning. El Nino has not started yet, however scientists believe there is an over 70 percent chance El Nino conditions will begin by September which would likely raise the global thermostat even further. 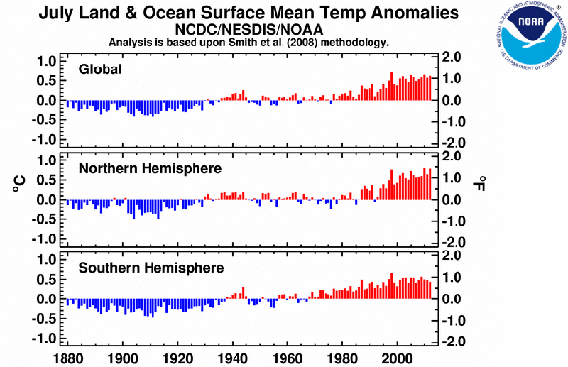 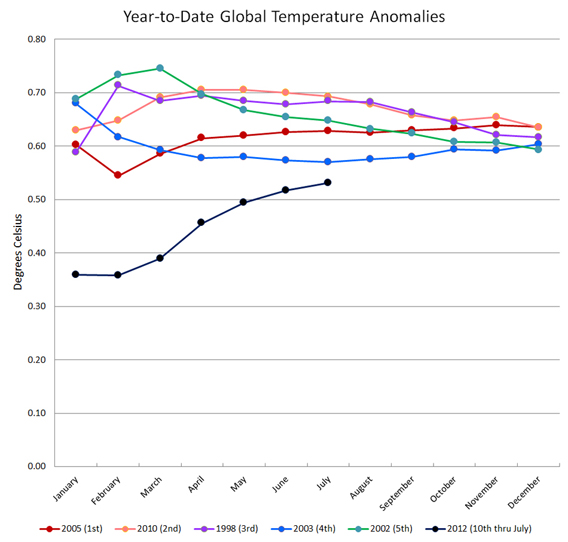 As La Nina subsided, global temperatures have been creeping upward this year (black line). Currently the year is the tenth warmest on record. Graph courtesy of NOAA. Click to enlarge.

(08/06/2012) As the world experiences record heat, increased drought and fires, unprecedented ice melt and similar extreme weather anomalies decades before expected, climatologists have been forced to reconsider previous climate change projections and research techniques. Less than a decade ago, scientific consensus considered warming of more than 2 C and atmospheric levels of carbon dioxide near 450 parts per million (ppm) as acceptable or “safe”. Revised climate science literature and expert opinion now regard safe atmospheric levels of carbon dioxide as below 350 ppm, or less than 1 C rise in average planetary temperature. Many researchers and environmentalists, however, recognize that the present deviation from pre-industrial temperatures of 0.8 C may be unacceptable to prevent runaway climate change and widespread disasters.