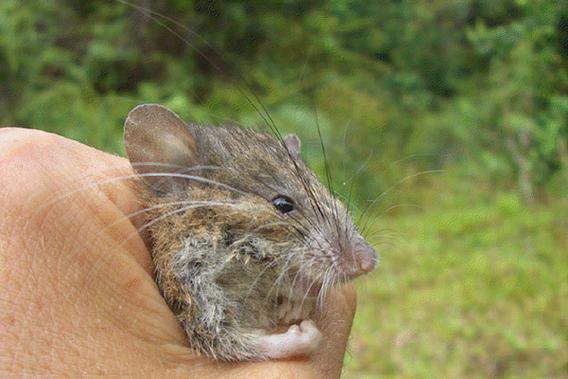 Researchers have discovered a new species of rodent in Indonesia’s Mekongga Mountains, reports the Jakarta Globe. The new rodent, Christine’s Margareta rat (Margaretamys christinae), is only the fourth in the genus Margaretamy, all of which are found on the island of Sulawesi.

The new mammal’s discoverer, Alessio Mortelliti with Sapienza University, told the Globe that the new species differs from its relatives by its smaller size, the white tip of its tail, and its habitat in high altitudes. Mortelliti named the new species after his girlfriend who accompanied him on the expedition.

“I strongly believe that it is very likely that several other undiscovered species may be present in the area, including other Margaretamys species,” Mortelliti told the Globe.

Of the other three Margaretamys species, one is listed as Vulnerable by the IUCN Red List, a second Near Threatened, and a third Data Deficient due to a lack of information. Deforestation for agriculture is the primary threat. Around 80 percent of Sulawesi’s forest have been lost or degraded. As for Christine’s Margareta rat, it may be imperiled as well.

“These are all forest species, so are threatened by habitat loss and fragmentation,” Mortelliti explained to the Jakarta Globe. “The Mekongga mountain range is threatened by logging and by expansion of cocoa plantations. The establishment of a protected area will surely help to conserve these rare endemic species.”

The discovery of new mammals is quite rare. For example in 2009, scientists discovered 19,232 new species, however only 42—or 0.2 percent—of these were mammals.

(06/19/2012) A new species of moth has been named after one of the world’s most popular movie blockbusters: Avatar. Discovered on New Zealand’s Denniston Plateau during a biodiversity survey by local NGO Forest & Bird this March, the new moth species is imperiled by plans for a coal mine on the plateau. The name—Avatar moth (Arctesthes avatar)—was chosen by its discoverers from a list of almost 100 entries by the public.