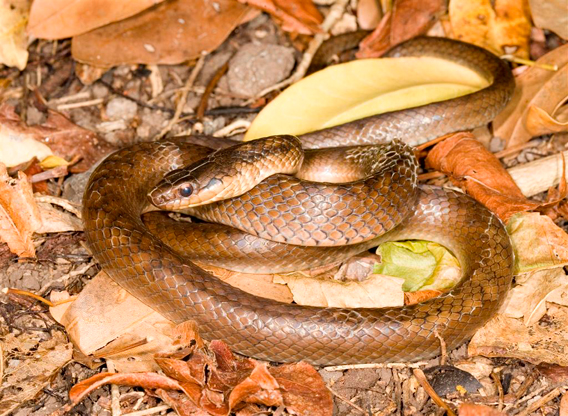 It’s slithery, brown, and doesn’t mind being picked up: meet the Saint Lucia racer (Liophis ornatus), which holds the dubious honor of being the world’s most endangered snake. A five month extensive survey found just 18 animals on a small islet off of the Caribbean Island of Saint Lucia. The snake had once been abundant on Saint Lucia, as well, but was decimated by invasive mongooses.

For nearly 40 years the snake was thought to be extinct until in 1973 a single snake was found on the Maria Major Island, a 12-hectare (30 acre) protected islet, a mile off the coast of Saint Lucia (see map below). After catching and tagging 10 individuals, scientists now believe 18 may survive in total. The island is free of the mongoose that have killed off the population of Saint Lucia. Non-venomous, the Saint Lucia racer feeds on local lizards.

“It was a huge relief to confirm that a population of the racer still survives,” Matthew Morton, Eastern Caribbean Program Manager for the Durrell Wildlife Conservation Trust (DWCT), said in a press release, “but that relief is tempered by the knowledge of how close we still are to losing it forever.”

The DWCT is working with Fauna & Flora International, the Saint Lucia National Trust, and the Saint Lucia Forestry Department to save the species with additional funding support from the Balcombe Trust, the Disney Worldwide Conservation Fund and the U.S. Fish & Wildlife Service.

Conservationists working with the Saint Lucia racer are closely looking at successful efforts to save the Antiguan racer (Alsophis antiguae). With a population that hit a nadir of 50 individuals in 1995, the Antiguan racer today has a population of over 900. Eradicating invasive predators, such as mongoose and rats, as well as education efforts have helped the Antiguan racer bounce back. Researchers are now looking to reintroduce the snake to more habitats as an insurance policy against extinction, especially as climate change raises sea levels.

“Tens if not hundreds of West Indian animals have already been lost because humans have unwisely released harmful species from other parts of the world, and we cannot allow the gentle Saint Lucia racer to be the next casualty” Jenny Daltry, Senior Conservation Biologist with Fauna & Flora International says. “To do nothing is not an option.” 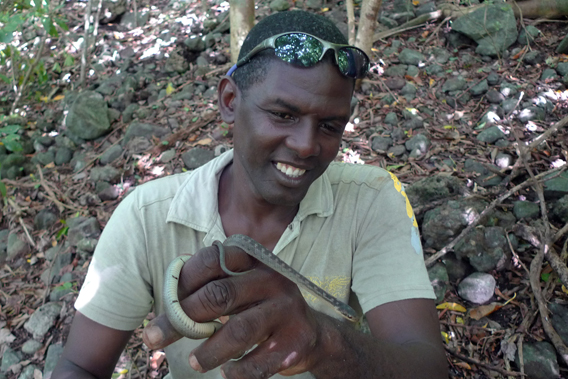 (02/24/2012) Scientists in Australia have discovered a species of sea snake in estuaries of the Gulf of Carpenteria in northern Australia. The snake is described in the current issue of Zootaxa.

‘Snakes on a Plane’ trafficker freed early from jail

$500 offered for rediscovery of extinct snake

(11/29/2011) Need to make a quick 500 bucks? Easy: head to Glades County, Florida and find a specimen of the South Florida rainbow snake (Farancia erytrogramma seminola), which the US government says is extinct. In an unusual bid two NGOS, the Center for Biological Diversity (CBD) and the Center for Snake Conservation, are offering a substantial reward to the first person who can prove that the South Florida rainbow snake has not vanished forever.