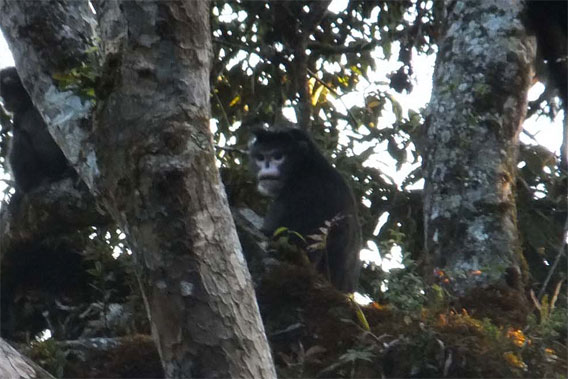 Researchers have published the first evidence that a recently discovered monkey ranges into China, releasing pictures of the Rhinopithecus strykeri snub-nosed monkey in its natural habitat in Yunnan province. The photos are published in the current issue of the American Journal of Primatology.

Rhinopithecus strykeri was first described by scientists in 2010 after it was sighted in Kachin, a state of northeastern Myanmar (Burma). The subsequent expedition in China was led by Yongcheng Long from the Nature Conservancy China Program after a forest ranger photographed a group of snub-nosed monkeys near Pianma, in Yunann’s Lushui County.

Long said the species is almost certainly critically endangered in China, due to its low population.

“The population of this species is hard to estimate, but based on our contacts with the monkey group both in October 2011 and in March 2012 we estimate the population to be less than 100 individuals,” said Long. “However, while we now know the home range to be far greater than previously believed, we still do not yet know the true population number or the extent of their home range as the monkeys are shy and very hard to access.” 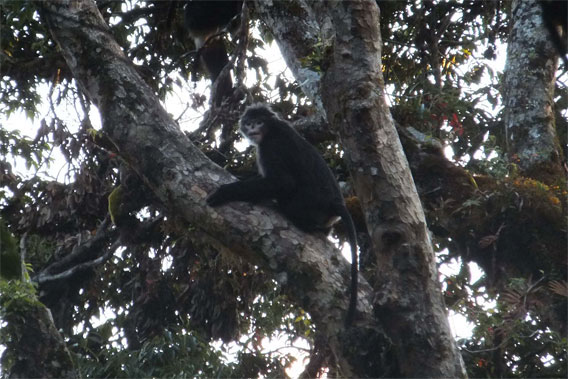 “The discovery of Rhinepithecus strykeri in China gives a bit more hope for the species survival, however the population is still considered critically endangered, due to the high level of threats and very small population.”

The researchers are calling for protection of the species and its habitat in China and Myanmar.

“This monkey group was actually found in an area designated as a nature reserve 30 years ago and while local people have been hunting the species for ages, local managers knew nothing about it,” concluded Long. “This highlights the need to improve wildlife management in China, as it is likely quite a few new species of plants and animals may be discovered in the border areas between China and Myanmar.”

Rhinopithecus strykeri is named in honor of Jon Stryker, President and Founder of the Arcus Foundation, which helped fund the initial research. The monkey is know locally as mey nwoah or the ‘monkey with an upturned face’.

In search of rare, high elevation monkeys in China

(10/19/2006) High in the cloud-shrouded Yunling mountains of northwestern Yunnan and southeastern Tibet (southwestern China) lives one of the world’s most elusive monkeys, the Yunnan golden or snub-nosed monkey (Rhinopithecus bieti). Despite dwelling the most extreme environment of any monkey species — high-altitude evergreen forests at elevations from 3000 – 4500 m (9800 – 14,800 feet) where temperatures may fall below freezing for several months in a row — today there are less than 2000 of Yunnan snub-nosed monkeys remaining. Hunting and habitat loss has brought the species, which is limited to a single mountain range and fragmented into 15 small sub-populations at risk to genetic bottlenecks and inbreeding depression, to the brink of extinction.