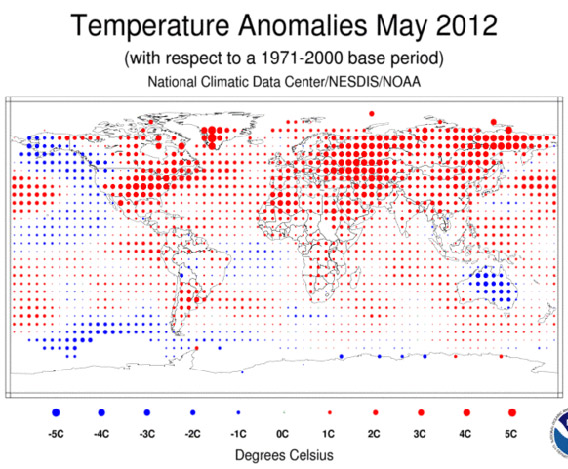 Last month was the second warmest May since record-keeping of global temperatures began 132 years ago. Globally, temperatures were 0.66 degrees Celsius (1.19 Fahrenheit) above the 20th Century Average and were only topped by May 2010, according to preliminary findings by the National Oceanic and Atmospheric Administration (NOAA).

If you live in the northern hemisphere, it was actually the warmest May on record with temperatures 0.85 degrees Celsius (1.53 degrees Fahrenheit) above average.

Climate change is occurring worldwide due to burning fossil fuels, deforestation, industrial agriculture, and other human activities that result in the emissions of greenhouse gases. Since the early Twentieth Century, temperatures have risen approximately 0.8 degrees Celsius (1.44 degrees Fahrenheit) worldwide. Shockingly, the world hasn’t experienced a single year below the 20th Century average since 1975.

“With the current policies in place, the world is perfectly on track to six degrees Celsius increasing the temperature, which is very bad news. And everybody, even school children, know this will have catastrophic implications for all of us,” the chief economist with the International Energy Agency, Faith Birol, recently said.

(05/21/2012) La Nina conditions, which generally bring colder temperatures to many parts of the world, ended last month resulting in the fifth warmest April since record-keeping began, and the hottest April yet in the terrestrial Northern Hemisphere, according to the National Oceanic and Atmospheric Administration (NOAA).