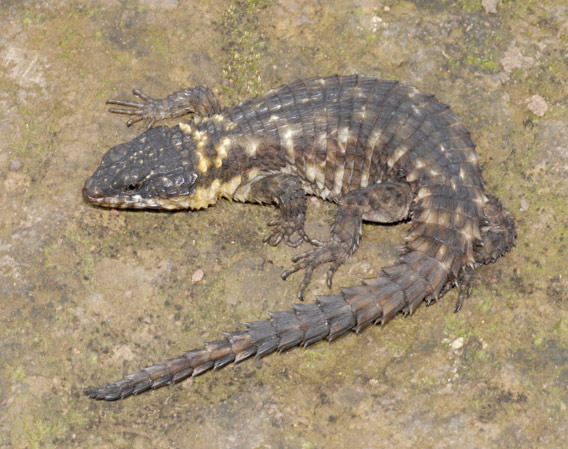 The new species of lizard, Cordylus marunguensi, from the Democratic Republic of Congo. Photo courtesy of Eli Greenbaum.

A new lizard has been discovered in a war-torn area of the Democratic Republic of the Congo (DRC). According to a paper in the African Journal of Herpetology, the new species was found hiding under a rock in the high grasslands of the Marungu Plateau, an area known for landmines.

Dubbing the species Cordylus marunguensi after the plateau where it was discovered, the researchers noted that the lizard appears locally-common despite human impacts like agriculture, cattle-ranching, and warfare.

“Marungu Plateau was involved in heavy fighting during a widespread conflict in eastern DRC at the turn of the twenty-first century and, as a result, a large area surrounding the type locality for Cordylus marunguensis is carpeted in land mines and unexploded ordnance,” the scientists write.

They recommend more research on the species before determining if it is endangered.

The scientists also note that the Marunga Plateau “might be an undervalued site of conservation importance,” given that researchers in the past have described several bird species which may be endemic to the plateau.

“Although the Marungu Plateau has been heavily damaged by warfare and habitat destruction, the new lizard proves that it is not too late to implement conservation efforts,” lead author Eli Greenbaum said in a press release.

The plateau, which is around 2,000 meters (6500 feet) above sea level, used to be home to a population of chimpanzees as well, but scientists believe that deforestation resulted in their local extinction.

(04/30/2012) In a single paper in Zootaxa scientists have rewritten the current understanding of lizard biodiversity in the Caribbean. By going over museum specimens of skinks, scientists have discovered 24 new species and re-established nine species previously described species, long-thought invalid. The single paper has increased the number of skinks in the Caribbean by 650 percent, from six recognized species to 39. Unfortunately, half of these new species may already be extinct and all of them are likely imperiled.

(02/13/2012) Researchers have discovered a new species of lizard in the Peruvian Andes, whose males sport beautiful colors, according to a paper in ZooKeys. The highest-dwelling known species of the genus Potamites, the new lizard, dubbed Potamites montanicola, was found in forest streams at 1,500 to 2,000 meters (4,900 to 6,500 feet). The species was discovered as apart of a biodiversity monitoring program by COGA, a Peruvian fossil fuel company.