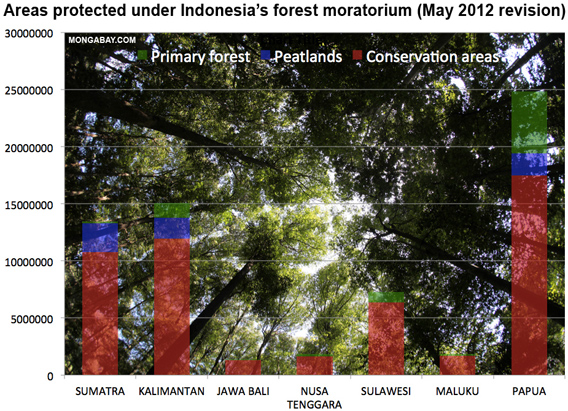 Indonesia is making “encouraging” progress on its push to reduce deforestation by improving governance over its forests and peatlands but still needs to do more to enforce environmental laws, said the head of the country’s Reducing Emissions from Deforestation and Degradation (REDD+) task force speaking at a press conference Monday in Jakarta.

Kuntoro Mangkusubroto, Head of the Indonesian President’s Delivery Unit for Development Monitoring and Oversight (UKP4) and Chair of the REDD+ Task Force, said an effort to develop a map of Indonesia’s forests and forest concessions has been completed, although the Ministry of Forestry has yet to deliver the map to President Susilo Bambang Yudhoyono, missing last Friday’s deadline. The map serves as the basis for a two-year moratorium on new forestry concessions in primary forests and peatlands had been completed.

“The moratorium has been effective for the One Map development,” said Kuntoro. “This is an extraordinary achievement considering that many institutions and ministries previously used different maps as the basis for the issuance of various management permits.”

The harmonized map is important because ministries responsible for land grants have traditionally used their own maps for issuing permits to convert peatlands and forests, resulting in poor management, overlapping land claims, and rampant deforestation. The new map used satellite imagery and field surveys to refine the previous version of the moratorium map, which was released in November 2011 and had a number of errors including missing peat forests and villages classified as forests. Overall the area of primary forest and peatland off-limits to concessions increased by 379,000 hectares to 65,753,810 ha.

Kuntoro said the new map includes a contentious area of peat swamp forest in Tripa, a coastal area in Aceh Province, on the island of Sumatra. A concession to convert the peat forest for an oil palm plantation was granted last year by Aceh’s outgoing governor Yusuf Irwandi seemingly in violation of the national moratorium. After outcry from environmentalists and prodding by Kuntoro, the Ministry of Environment last month announced it would investigate the permit, which was granted to palm oil company PT Kalista Alam. Kuntoro has called the concession illegal and demanded PT Kalista Alam restore any forest it has already damaged.

Kuntoro added that the task force would like to see more public participation with the moratorium map, including complaints where it fails to capture realities on the ground and instances where the moratorium has been violated.

Kuntoro has wide-ranging power, including the authority to review all of Indonesia’s 33 ministries to ensure they take action to implement the moratorium. Last week he sent a letter to the governor of Central Kalimantan, Indonesia’s REDD+ pilot province on the island of Borneo, warning that he will investigate permits to see whether the governor granted any illegally.

Kuntoro has also pushed for transparency, calling for concession data to be published online as a means to crack down on corruption and “forest crimes” in the forestry sector. Traditionally such information has been closely guarded by the Ministry of Forestry and the Ministry of Agriculture.

Indonesia’s forest moratorium – by the numbers. Indicative map May 2012 revision.

Indonesia imposed its forest moratorium a year ago as part of a $1 billion emissions reductions pact with Norway. Under the agreement, Indonesia will be paid forest reducing CO2 emissions from deforestation and forest degradation.

Indonesia has one of the highest deforestation rates in the world, rivaling Brazil, which has substantially more forest cover. Land use — including deforestation, drainage and degradation of peatlands, and logging — accounts for more than 70 percent of the country’s greenhouse gas emissions, yet logging and plantation industries generate less than 5 percent of GDP. Accordingly, President Yudhoyono is advocating for forestry sector reform as the centerpiece of his green economic growth model, which targets seven percent economic growth and a 26 percent reduction in emissions from a projected 2020 baseline. 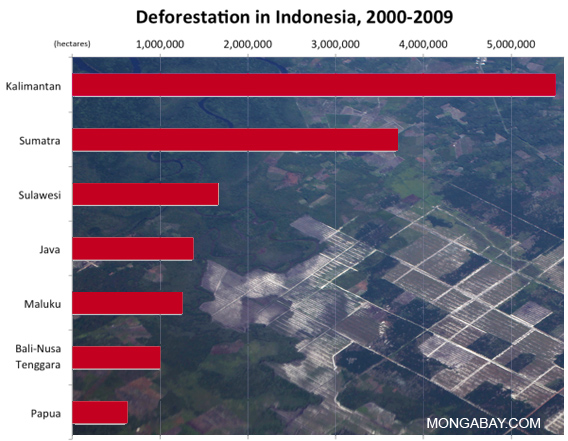 Indonesia’s moratorium will not significantly reduce emissions, but has other benefits, finds analysis

(02/27/2012) Indonesia’s moratorium on new forest concessions alone “does not significantly contribute” to its goal of reducing greenhouse gas emissions 26 percent from a projected 2020 baseline, concludes a new analysis by the World Resources Institute (WRI). However the study says the moratorium does support the target in the long-term by creating a window for enacting governance reform needed to stop destructive business-as-usual approaches to forest management.

(06/28/2011) Indonesia’s Ministry of Forestry is already undermining the moratorium on new forestry concessions on peatlands and in primary forest areas, alleges a new report from Greenomics-Indonesia. The report, The Toothless Moratorium, claims that a new decree from the Ministry of Forestry converts 81,490 hectares of forest protected under the moratorium into logging areas. The area affected is larger than Singapore.