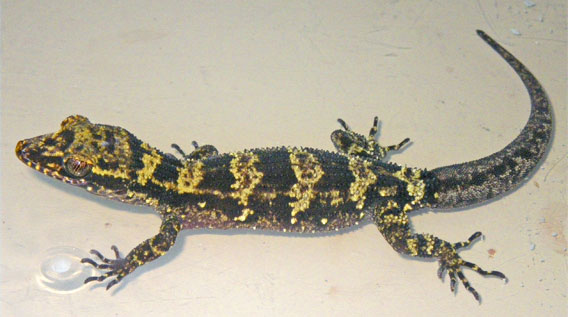 The Bumblebee Gecko (Nactus kunan) from Manus Island off Papua New Guinea was discovered in 2010, and described as a new species in 2012. Photo by Robert Fisher of the U.S. Geological Survey

Researchers from the Papua New Guinea National Museum and the U.S. Geological Survey have discovered a new species of gecko on an island off the coast of New Guinea.

The gecko is characterized by black-and-gold bands and attains a length of about 5 inches from head to tail. It is described in this month’s issue of Zootaxa.

“The discovery of a new species from deep in the forests of New Guinea is a cause for celebration, adding one more chapter to ‘The Book of Life,'” said USGS Director Marcia McNutt in a press release. “Now the real work begins! To fill those pages with the wonders of this new creature, its place in the forest ecosystem, its adaptation to its environment, and perhaps even novel strategies for coping with disease from which we will ultimately benefit.”

The gecko, which was collected in May 2010 on Manus Island, is named Nactus kunan for its bumblebee-like coloration, according to USGS biologist Robert Fisher, who together with George Zug of the Smithsonian Institution, officially described the species.

“Kunan means ‘bumblebee’ in the local Nali language,” he said in a statement. “It belongs to a genus of slender-toed geckos, which means these guys don’t have the padded, wall-climbing toes like the common house gecko.”

Two other lizards collected during the expedition are currently being studied to determine whether they are also new to science.

“Exploration of Manus Province is in its infancy, with many new species possible, and this joint expedition was our first to this region,” said Bulisa Iova, the reptile curator at the Papua New Guinea National Museum.