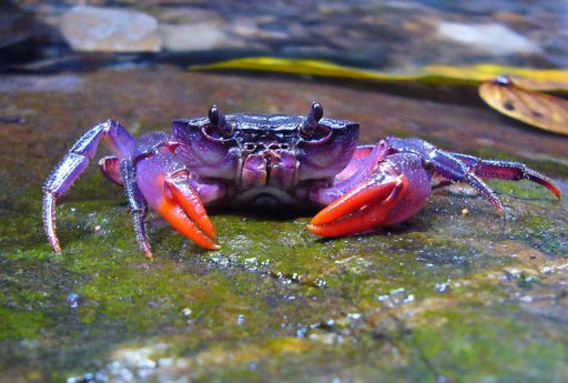 Scientists have discovered four new species of brilliantly-colored freshwater crabs on the Philippine island of Palawan. Described in the Raffles Bulletin of Zoology, the new species expands the genus, Insulamon, from one known crab species to five. Although its ecosystems are threatened by widespread mining and deforestation, the Philippines is a mega-diverse country, meaning that it belongs to a select group of 17 countries that contain the bulk of the world’s species.

Found in streams, the primarily nocturnal crabs feed on plants as well as small animals. The largest of the four new species is still quite small, its carapace spanning 5.3 centimeters, while the smallest carapace’s measures just 2.5 centimeters. The researchers theorize that the bright colors evolved for mating behavior.

The discovery of the new crab species follows two other recent biodiversity announcements in the Philippines. Two new frogs were discovered in Leyte Island in a biological survey last year. Meanwhile, the Dinagat bushy-tailed cloud rat (Crateromys australis) was rediscovered earlier this year after not being recorded for nearly forty years.

Palawan Island retains around half of its forest cover, but most of this in mountainous regions. The island’s lowland forests are imperiled by deforestation and mining, including widespread illegal mining. The Philippines remaining primary forests are largely found on Palawan.

(09/06/2011) Authorities in the Philippines captured the largest crocodile on record after a series of fatal attacks, reports Agence France-Presse (AFP).

(06/26/2011) Scientists believe they have discovered more than new 300 species during a six-week expedition to the Philippines.

(06/16/2011) Seven new species of mice have been discovered in the rainforests of Luzon island in the Philippines, according to the country’s Department of Environment and Natural Resources.

On the edge of extinction, Philippine eagles being picked off one-by-one

(05/23/2011) Down to a few hundred individuals, every Philippine eagle is important if the species is to survive. However, the Philippine Eagle Foundation (PEF) has recently announced that people continue to illegally trap and keep eagles captive. Since December the organization has taken-in four confiscated Philippine eagles (Pithecophaga jefferyi), according to The Philippine Star. One died of a fungal infection after confiscation, while two others has suffered serious injuries.

Environmentalists say President of Philippines not deserving of conservation award

(04/13/2010) Filipino environmentalists and religious leaders have expressed shock and anger that Gloria Macapagal-Arroyo, the President of the Philippines, has been chosen to receive a conservation award from the US Congress in Washington, DC today according to the Philippine Daily Enquirer.