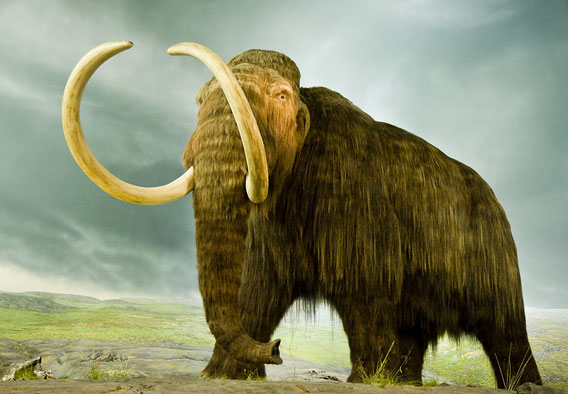 Woolly mammoth recreation in a museum. Photo by: Bigstock Photo.

Last week Russian and South Korean educational facilities signed an agreement to work together to bring back the woolly mammoth (Mammuthus primigenius) from extinction. The project will be headed by Hwang Sooam of South Korea’s Bioengineering Research Institute and will involve implanting a woolly mammoth embryo into a modern elephant.

The first, and largest, barrier to success is finding woolly mammoth tissue with undamaged DNA. Once that is collected from frozen remains in the Siberian permafrost, scientists would replace the nuclei of an elephant egg with the woolly mammoth DNA. It would then be implanted in an Indian elephant (Elephas maximus indicus), and, if all goes according to plan, birthed some 22 months later.

Sooam was the first scientist to clone a dog seven years ago.

During their heyday, woolly mammoths roamed northern Europe, Asia, and North America. They largely vanished around 10,000 years ago, however a relict population survived on an Arctic island off Russia, Wrangel Island, until about 2,000 BCE. Researchers believe that the woolly mammoth went extinct due to the combined impact of climate change and overhunting by humans.

Animal photos of the day: elephants in the English countryside

(03/14/2012) Elephants have been spotted roaming the pastoral fields of eastern England. Released for a jaunt from the Zoological Society of London’s Whipsnade Zoo, a herd of Asian elephants (Elephas maximus), including a four-month-old calf named Scott, took in the scenic views of Aylesbury Vale from the Chiltern Hills. “Scott usually crashes out as soon as he’s back from the walk. We put piles of hay down in the barn and he’s out for the count.”

(02/27/2012) Not long ago, geologically speaking, coyotes (Canis latrans) were bigger and more robust than today’s animals. In the late Pleistocene, over 10,000 years ago, coyotes rivaled grey wolves (Canis lupus) in size. But, according to a new paper in the Proceedings of the National Academy of Sciences (PNAS), coyotes shrunk significantly following the megafaunal extinction—including the disappearance of big herbivores like giant sloths and mastodons and predators like the smilodon—due to changes in prey and predator competition.

(02/27/2012) Around 25 million years ago a penguin with a long, sharp beak and massive flippers lived in a New Zealand that was almost entirely underwater. The bird, named Kairuku after a Maori word that means “diver who returns with food,” was first discovered in 1977, but has only recently been reconstructed by scientists in a study in the Journal of Vertebrate Paleontology.