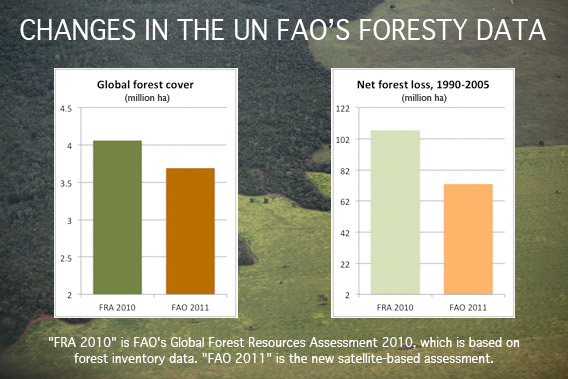 CHANGES IN THE UN FAO’S FORESTY DATA: “FRA 2010” is FAO’s Global Forest Resources Assessment 2010, which is based on forest inventory data. “FAO 2011” is the new satellite-based assessment.

Global forest cover, as well as forest loss, is lower than previously estimated by the Food and Agriculture Organization (FAO), according to a new satellite-based assessment that replaces the self-reporting system previously used by the U.N. agency.

FAO says that nearly half (44 percent) the world’s remaining forest cover lies in the tropics, while another third is in boreal regions. Temperate forests account for 13 percent of the global total, while sub-tropical forests amount to only 9 percent.

The remote sensing survey also evaluated change in forest cover. It found a net reduction in global forest area between 1990 and 2005 of 72.9 million hectares, or roughly a third lower than the previous estimate of 107.4 million hectares. Much of the discrepancy came from better analysis of African forests, where self-reported data was out of date.

FAO says its assessment does not adequately account for changes in tree cover in areas where the canopy is less than 30 percent. Forests will low canopy cover are usually degraded or occur in dry areas.

FAO did not release data for individual countries. That assessment will be available at a later date. 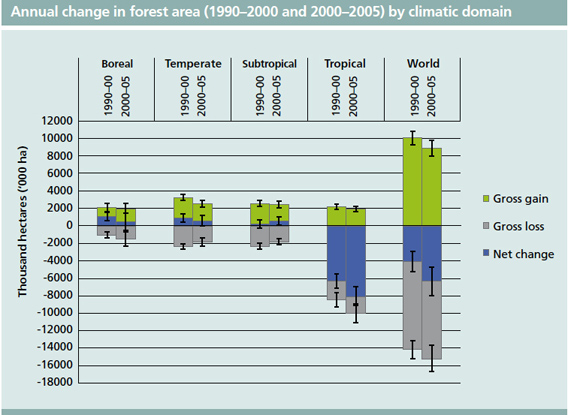 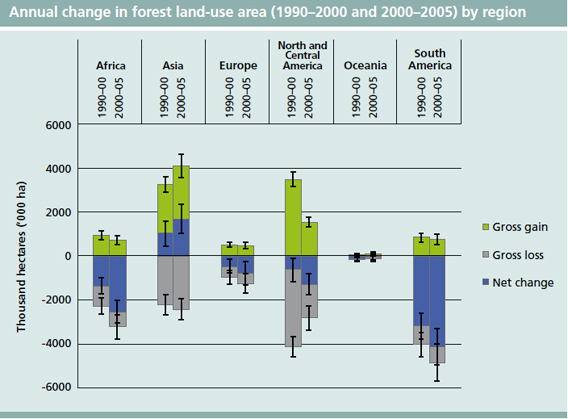 Annual change in forest area (1990–2000 and 2000–2005) by region. Note the net result (blue) is the result of the sum of the gross gains minus losses. A negative net result indicates overall forest conversion to other land uses. Courtesy of FAO.