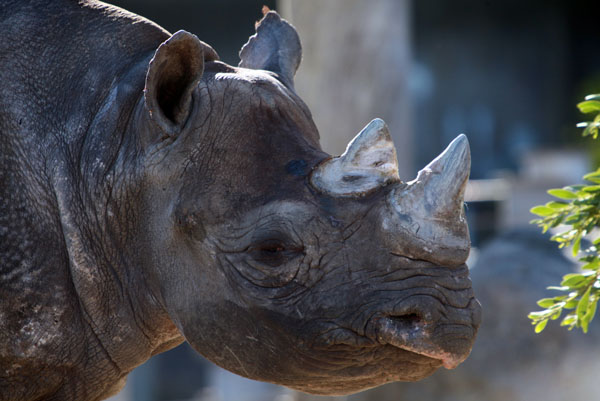 The black rhino, which is considered critically endangered, in captivity. Photo by Rhett A Butler

The rhino, one of four sub-species of black rhino, was declared extinct this week by the IUCN, five years after the last extensive survey of its habitat in Cameroon turned up no evidence of surviving individuals.

The western black rhino was once widespread across the savannas of central-west Africa but decline due to hunting in the early 20th century. The population rebounded in the 1930s due to conservation efforts, but reversed as these waned. The population was in the hundreds by 1980 and declined to 10 by 2000.

The rhino becomes the second declared extinct this year. Last month the Vietnamese rhino, a subspecies of the Javan rhino, was officially listed as extinct. Both species were the victim of habitat loss and poaching. Both were ultimately done in by the Chinese rhino horn trade, which has driven the price of horn beyond gold, despite no evidence to suggest horn has any power beyond the placebo effect.

All of the world’s remaining rhino species are considered at risk of extinction. All are threatened by the rhino horn trade.

The next rhino likely to go extinct is the northern white rhino (Ceratotherium simum cottoni), a central African subspecies of white rhino. The Javan rhino is meanwhile down to less than 40 individuals in Sumatra’s Ujung Kulon National Park.

(11/03/2011) Two months before the end of the year, the number of rhinos killed for their horns in South Africa has surpassed last year’s breaking record, reports conservation organizations WWF and TRAFFIC. So far, 341 rhinos have been lost to poaching this year; while last year saw a total record of 333. The news follows last week’s announcement that the Vietnamese rhino (Rhinoceros sondaicus annamiticus), a subspecies of the Javan rhino, has gone extinct—the last individual killed by a poachers’ bullet. Rhinos are killed for their horns which are used in traditional Chinese medicine, even though numerous studies have shown there is no medicinal benefit to consuming rhino horn.

(10/26/2011) In 2009 poachers shot and killed the world’s last Vietnamese rhinoceros (Rhinoceros sondaicus annamiticus), a subspecies of the Javan rhino. The Vietnamese rhino was the last rhino species that survived on the southeast Asia mainland.

Down to 50, conservationists fight to save Javan Rhino from extinction

(05/17/2011) Earlier this year, the International Rhino Foundation launched Operation Javan Rhino to prevent the extinction of the critically endangered Javan Rhinoceros (Rhinoceros sondaicus), formerly found in rain forests across Southeast Asia. Operation Javan Rhino is a multi-layered project which links field conservation, habitat restoration, and management efforts with the interests of local governments and communities. The following is an interview with Susie Ellis, Executive Director of the International Rhino Foundation.