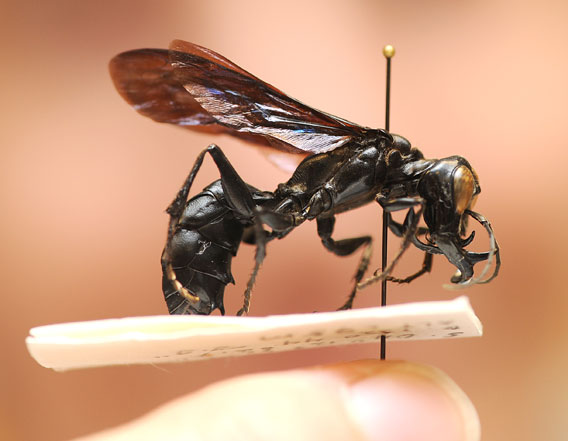 A new wasp found in the Mekongga Mountains in southeastern has jaws bigger than its legs. Photo by Kathy Keatley Garvey.

A new species of warrior wasp has been discovered on the Indonesian island of Sulawesi that is so large and, frankly, terrifying-looking that it has been dubbed the ‘Komodo dragon’ of the wasp family. Bizarrely, the male of the species has jaws that outstretch its limbs.

“I don’t know how it can walk,” said the wasp’s discoverer, entomologist Lynn Kimsey of the University of California, Davis and director of the Bohart Museum of Entomology, in a press release. “Its jaws are so large that they wrap up either side of the head when closed.”

A male of the new species spans two-and-a-half inches, and Kimsey says it jumped out at her right away during a three week expedition funded by the International Cooperative Biodiversity Group Program.

“The first time I saw the wasp I knew it was something really unusual. I’m very familiar with members of the wasp family Crabronidae that it belongs to but had never seen anything like this species of Dalara [the genus]. We don’t know anything about the biology of these wasps. They are only known from southwestern Sulawesi.”

Kimsey is no stranger to new species; she has already discovered nearly 300 new insect species. However, she puts Sulawesi in the top three biodiverse islands on Earth, along with Madagascar and Australia. All three islands are known for endemic species, those that survive no-where else. She says she has discovered “hundreds maybe thousands” of new insects in Sulawesi alone.

“It will take years, maybe generations, to go through them all.”

And the Komodo dragon wasp was not the only one that stood out on the recent expedition.

“We saw a colonial spider web that stretched across two acres. The adult spiders were about two inches long.”

Despite its Komodo nickname, Kimsey plans to name the new monster wasp after a local mythical warrior: Garuda, half-human, half-eagle, and a national symbol of Indonesia.

Sulawesi, a remote island in Indonesia, is known for its weird and wonderful wildlife, including mini-wild cattle, the anoa; and boars with tusks busting through their snouts, the babirusa; and a ground bird that depends on geothermal heat to incubate its eggs, the maleo.

Unfortunately, like much of Indonesia, Sulawesi is rapidly losing the forest that shelters these species. Approximately 80 percent of Sulawesi’s forests are already gone or degraded to some degree. Over 50 percent are considered in poor condition, while 30 percent—mostly in the highlands (above 1500 meters)—are classified as in good condition. The new wasp was discovered in just such highlands. 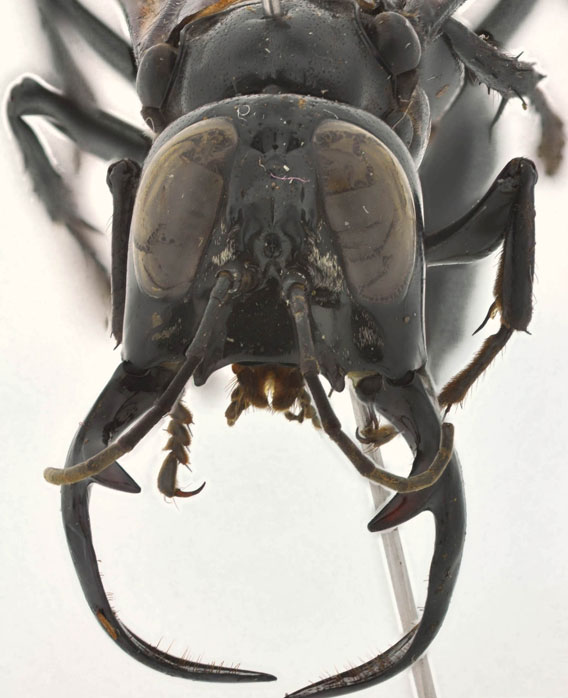 (06/28/2011) A research expedition has turned up two to four new species of shrew on the Indonesian island of Sulawesi, reports a conservation group working to protect their forest habitat.

(05/10/2011) The Nantu Wildlife Reserve is located in northern Sulawesi’s Minehasa Peninsula, in Gorontalo Province. Sulawesi is among the largest of Indonesia’s some seventeen thousand islands. Its shape is bizarre: a sinuous sprawling monkey, with lavish tail, poised to leap the straits of Makassar. Sulawesi lies to the north of Bali and Lombok and to the east of Borneo. Alfred Russell Wallace, the nineteenth century English explorer and natural scientist of broad expertise, spent a lot of time in Sulawesi’s northern peninsula, casting his curiosity and observation with such singular acuity that his mind apprehended “Darwin’s theory of evolution” independently from and possibly before Darwin. His work described the zone of transition between the Asian and Australian zoographic regions and was so accurate and thorough in its logic that today, some one-hundred and fifty years later, the zone is named Wallacea.

Sulawesi groups recognized for efforts to save endangered wildlife, forests

(12/08/2010) Two groups working with local communities to conserve forests in Sulawesi have won mongabay.com’s 2010 Conservation Award. The Alliance for Tompotika Conservation (AlTo), which works in Central Sulawesi, and the Nantu Forest Conservation Program, which operates in North Sulawesi, were recognized for their efforts to protect endangered forests on the Indonesian island, which is known for its high levels of endemic species.

Saving the maleo, a geothermal nesting bird, in Sulawesi

(12/06/2010) More species are threatened with extinction in Indonesia than any other country on Earth. If we are to save them, it will take more protected areas, radical shifts in deforestation, and better anti-poaching efforts, but in many cases it will also take species-specific conservation efforts that work directly with local people. The Alliance for Tompotika Conservation (AlTo) is a model organization for this method, founder Marcy Summers describes it as ‘very small, community-based, and efficient, with very low overhead.’ By focusing on the wonderfully bizarre maleo, a ground-dwelling bird on the island of Sulawesi, the organization has succeeded in protecting a vital nesting area while initiating a moratorium on the egg-harvesting, which once devastated the species.

(12/06/2010) The babirusa of Sulawesi may be one of the world’s oddest looking—and acting—mammals. Literally meaning ‘pig-deer’ the babirusa, which includes four species, belongs to its own genus ‘Babyrousa’ in the pig family. Males are especially unique, sporting four tusks, two of which appear to come right out of the animal’s snout. To make it to the top of the babirusa hierarchy, males will combat each other in an activity dubbed ‘boxing’ where they will rear up on their hind legs and club at each other. Despite their many oddities, the babriusa were not formally studied until the late 1980s when Dr. Lynn Clayton spent four years in Sulawesi’s forest observing them.

(11/19/2008) Scientists have rediscovered a long-lost species of primate on a remote island in Indonesia. Conducting a survey of Mount Rore Katimbo in Lore Lindu National Park on the island of Sulawesi, a team led by Sharon Gursky-Doyen of Texas A&M University captured three pygmy tarsiers, a tiny species of primate that was last collected in 1921 and was assumed to be extinct until 2000 when two scientists studying rats accidently trapped and killed an individual. Gursky-Doyen’s team spent two months using 276 mist nets to capture the gremlin-like creatures so they could be fitted with radio collars and tracked. One other individual was spotted but eluded capture.