A new species of bee discovered in the Colombian rainforest could give the world’s biggest raspberry! Researchers say the new bee has the longest tongue of any known bee, and may even have the world’s longest tongue compared to body size of any animal: twice the size of the bee itself. The new species has been named Euglossa natesi in honor of bee-expert Guiomar Nates.

“This insect is unusual, because it has the largest tongue found thus far and measures two times the size of its body,” Rudolfo Ospina, the director of the biology department at Colombia’s National University, said in a press release.

The bee’s tongue, which is kept curled up in its mouth when not extended, measures 33.76 millimeters (1.32 inches), about the length of a paperclip.

A member of Euglossa bees, the new species uses its incredibly long tongue to feed on a variety of orchids. While all Euglossa bees—known for their bright colors—have long tongues, none beats Euglossa natesi.

The new species was collected in 2005 in Nariño Department at the Rio Nambi Private Nature Reserve near the border with Ecudaor. The area is known as one of the wettest places on Earth. 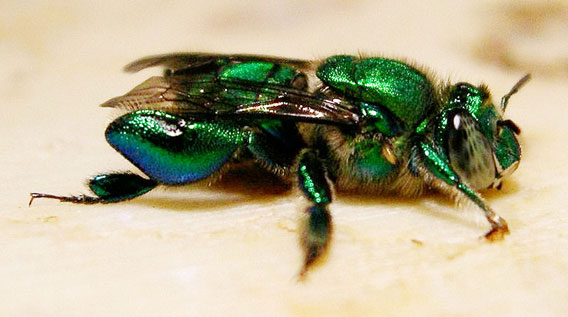 Male bee in the Euglossa genus showing off the characteristically bright colors of its genus. The species in the photo hasn’t been identified. Photo by: Jacob Rus.

(01/04/2011) Many US bumble bee populations have declined significantly over the past few decades, with certain species dropping off by as much as 96%. While the decline is linked to low genetic diversity and disease, an underlying cause remains uncertain.