Poll takes temperature on Brazilian’s support for a bill that environmentalists say would weaken the Forest Code, which stipulates protection for forest areas on private lands in the Amazon. It finds 79% of Brazilian support presidential veto of Amazon Forest Code revision and raises questions on public support for politicians who support the proposed revision. 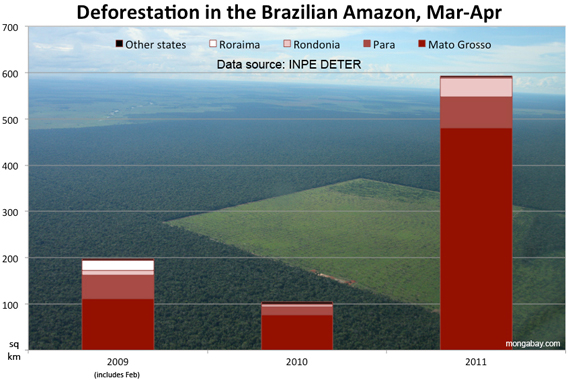 The vast majority of Brazilians reject a bill that would weaken Brazil’s Forest Code, according to a new poll commissioned by green groups.

The national poll asked 1286 Brazilians across a wide range of socioeconomic classes about their opinions on a Forest Code reform bill that passed Brazil’s lower house month. Environmentalists say the bill—in its present form—would grant amnesty to those who illegally cleared rainforest and would absolve them from taking reforesting lands as required under current Brazilian law. It would also reduce requirements for protecting forest on hillsides, along waterways, and on hilltops. The bill next heads to the Senate. If it passes, it would then most on to President Dilma Rousseff for final approval.

The survey found 79 percent in favor an eventual veto from Rousseff should the current bill pass the Senate. 84 percent agreed they would not vote for representatives or senators who had voted in favor of “pardoning illegal deforestation”.

“The survey shows how differences between rural and urban area, or between regions and social groups, are insignificant: there is just one trend across the country,” Roberto Smeraldi, director, Amigos da Terra – Amazônia Brasileira. “Possibly, the radical stand by rural leaders, who spent months alleging that all farmers would be illegal, so as to justify a law to forgive them, ended up backfiring, making public opinion to reject this idea.”

The telephone survey was conducted by Datafolha at the request of Brazilian environmental groups Amigos da Terra – Amazônia Brasileira (Friends of the Earth – Brazilian Amazon), IMAFLORA, IMAZON, Instituto Socioambiental (the Socio-environmental Institute), SOS Atlantic Forest and WWF-Brazil. The poll had a margin of error of 3 percent.

79 percent of those polled said they generally opposed pardoning farmers and ranchers who have cleared forest beyond that allowed by law. 45 percent of respondents supported amnesty only for those who agree to restore deforested areas up to the legal requirement, while 48 percent rejected amnesty in any form, arguing that transgressors need to be punished “to set an example for future generations.” Only 5 percent believe that deforesters should be forgiven without the need to reforest.

The questionnaire found wide support (77 percent) for further scientific assessment of the potential environmental impact of the Forest Code revision.

The findings are in sharp contrast to the broad support for the bill in Brazil’s lower house of Congress, where it passed easily. The bill has been championed by Aldo Rebelo, the head of Brazil’s Communist Party, with support from industrial agribusiness interests, including the National Agriculture Confederation and companies like Bunge, a U.S.-based commodities giant. But the bill has generally been opposed by small farmer groups and the rural poor.

Speculation over passage of the bill — and potential amnesty for deforestation beyond what is allowed under the current Forest Code — is thought to be a contributing factor to the surge in deforestation this year. Data release last month by Brazil’s National Space Research Agency (INPE) revealed that 593 square kilometers of forest was cleared between March and April 2011, an area of rainforest 10 times the size of Manhattan and a 473 percent increase over the 103.5 square kilometers chopped down from March-April 2010. The increase reversed the downward trend in deforestation since 2004. 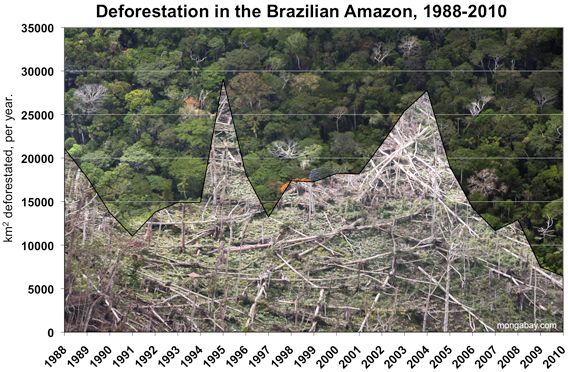 (05/25/2011) A controversial bill environmentalists say could increase deforestation in the Amazon rainforest moved a step forward to becoming law in Brazil after winning approval in Brazil’s lower house of Congress. The measure, which has been hotly debated for months, next goes to the Senate where it is expected to pass, before heading to President Dilma Rousseff, who has vowed to veto any bill that grants amnesty for illegal deforestation. The bill includes such a measure, although it could be subject to change before a final decision by the president. The bill aims to reform Brazil’s Forest Code, which requires landowners in the Amazon rainforest to maintain 80 percent of their holdings as forest.

(05/05/2011) Brazil’s forest code may be about to get an overhaul. The federal code, which presently requires landowners in the Amazon to keep 80 percent of their land forest (20-35% in the cerrado), is widely flouted, but has been used in recent years as a lever by the government to go after deforesters. For example, the forest code served as the basis for the “blacklists” which restricted funds for municipalities where deforestation has been particularly high. To get off the blacklist, and thereby regain access to finance and markets, a municipality must demonstrate its landowners are in compliance with environmental laws.