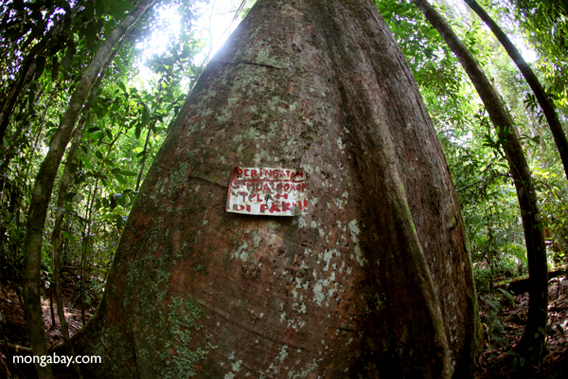 Sign warning that a rainforest tree has been spiked to discourage illegal logging in Indonesian Borneo. Photo by: Rhett A. Butler.

According to Greenomics-Indonesia, a Jakarta-based NGO, community and village forestry licenses are not among the many exemptions spelled under the presidential instruction that defines the moratorium. The instruction, issued last month, grants exemptions for industrial developers and allows business-as-usual in secondary forest areas by the pulp and paper, mining and palm oil industries.

“The only exceptions in the Presidential Instruction are for big business. In reality, the granting of licenses for community and village forestry development should have been prioritized for exclusion from the moratorium, especially as such activities are not environmentally destructive,” said Greenomics Executive Director Effendi Effendi. “This demonstrates beyond doubt that the Presidential Instruction is primarily concerned with promoting the interests of big business.”

Unlike industrial plantation development, mining, and logging, community forest management systems in Indonesia typically do not result in deforestation. For example “people’s forests” in Java are, for the first time in generations, regrowing. Given a stake in forest ownership, communities in Java have an interest in reforestation for timber production and other benefits afforded by forests.

Deforestation by small-holders in Indonesia is often driven by insecure land tenure — when communities lack clear ownership rights to land, they have little incentive to reject illegal logging or manage forests for the long-term. The model — which has contributed to the abandonment of traditional land stewardship in many areas — has driven large-scale devastation of Indonesia’s rich forest ecosystems.

Meanwhile the situation has been exacerbated by Indonesia’s system for granting forestry concessions. The bulk of Indonesia’s forest is owned by the state, which historically has doled out large concessions — often tens of thousands of hectares in extent — to logging companies. Local communities mostly lose out, leaving some to seek opportunities from illicit timber harvesting.

Now that it has been officially articulated, the moratorium seems to simply extend the status quo, according to Effendi.

“This proves once and for all that the Presidential Instruction fails to take into account the interests of those living in and around the forests.”

Beth Gingold and Fred Stolle of the World Resources Institute agree that “the omission of an exemption for community forestry permits… is a major weakness in the decree.”