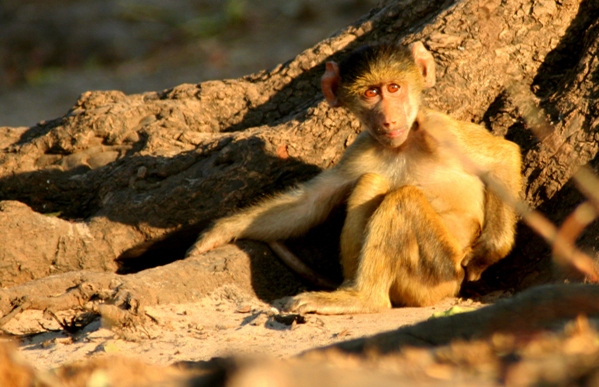 Shooting baboons will continue in Forest Stewardship Council (FSC)-certified plantations. After examining a complaint by the NGO GeaSphere against South African plantations for trapping and shooting hundreds of baboons, the FSC has announced it will not place a moratorium on baboon-killing in its sustainably-certified plantations.

“The Panel’s strange decision will just give the timber industry further justification for the ruthless killings,” Tim Strupat, a volunteer at GeaSphere, said in a press release.

Baboons, considered destructive vermin by the plantation industry, damage non-native plantation pines by removing their bark in the wet season. In some cases, trees die from the damage inflicted. The baboons in question are Chacma baboons (Papio ursinus), which are classified as Least Concern by the IUCN Red List, though the species is listed under Appendix 2 of CITES (the Convention on International Trade in Endangered Species of Wild Fauna and Flora).

The complaint from GeaSphere was weighed by an independent panel, which concluded the practice did not go against any current FSC regulations.

“Our conclusion is that the system of ‘bait, trap & shoot’, as currently practiced by several plantation companies in the region, including two FSC-certified Organizations, is not an infraction of any FSC Principles and Criteria,” the panel concluded. “The practice fully complies with legal requirements, it does not prejudice any Rare, Threatened or Endangered Species, it does not threaten any species with local extinction or elimination in the management unit, it does not threaten the viability of existing native ecosystems, and it respects the criteria dealing with ‘pest management’.”

However GeaSphere contends that the independent panel, appointed by the Executive Director of FSC International, was not independent at all.

“We have proof that at least one of the Complaints Panel members has been working for the timber industry on this particular issue,” said Philip Owen, GeaSphere’s Chairperson. Owen further alleges that the information regarding this particular member of the panel was hidden from the group by FSC.

“The panel was established in full consultation with the stakeholders,” Alison Kriscenski, a spokesperson for the FSC told mongabay.com. “The FSC Director’s Office worked closely with the stakeholders to select the panel members, and the panel has performed an extensive and thorough investigation since February. The panel’s conclusions, as well as the background and process of the dispute resolution, are published in a report available on our website. However, last week the FSC Board of Directors did receive a letter from the stakeholder that raises this issue and they are giving it their utmost consideration. ”

GeaSphere asked the FSC to place a moratorium on baboon killing, but the panel found that such an action was not required.

“The Complaints Panel is not prepared to recommend a moratorium on the killing of baboons before FSC has developed a policy for handling the ethical issues involved, because we cannot conclude the such activities are a serious infringement of existing FSC rules, and we are not convinced that there are proven solutions that can be used effectively and efficiently to manage the damage to trees during a moratorium.”

Strupat disagrees, arguing that culling baboons has never proven effective. He points to the fact that tree damage continues even though thousands of baboons have been shot since the practice began in the 1970s.

Alison Kriscenski, however, says that the FSC is simply following the protocol approved by the Baboon Damage Working Group (BDWG).

“The BDWG acts to ensure that this wildlife management issue follows a protocol that is inclusive, transparent and science-based, and relevant to the particular management challenges found in the region. This ensures that the dialogue and decisions on this region-specific forest management issue happen close to the forest and with local stakeholders that are directly affected by those decisions.”

Pointing to the panel’s decision, she says that the complaint has raised “the need for policies and guidelines on ethical issues related to managing or controlling species. FSC has started to develop further guidelines, and will provide leadership in forestry practices that raise issues of Environmental Ethics, as it has provided leadership in other areas.”

While such guidelines are developed, however, baboons on FSC plantations will continue to be trapped and shot.

GeaSphere altogether opposes the certification of monoculture plantations by the FSC, a position that a number of environmental organizations agree with.

“From the perspective of their ecological damage, monoculture tree plantations should not be certified at all; these ‘green deserts’ are only about making obscene profits for the companies concerned,” says Philip Owen.

Kriscenski responds that the measure to adopt plantations by the FSC was approved by 89 percent of FSC members in 1995, adding that certifying plantations “can contribute to improved social and environmental conditions that would otherwise remain unmonitored in these more intensive production systems.”

The FSC has faced stiff criticism from some in the environmental community not just for certifying monoculture plantations, but also for sustainably-certifying the destruction of old-growth forests, pursuing carbon credits, and putting the FSC stamp on companies with poor—sometimes dismal—human rights records.

However other larger environmental groups, including Greenpeace, WWF, and the Rainforest Action Network, continue as acting members within the FSC. The FSC’s General Assembly Meeting, where major decisions are made every three years regarding the organization, meets tomorrow.

“FSC’s strength is in its unique governance structure, which ensures decision-making is balanced between economic, environmental and social interests, as well as equal representation from Global North and South,” says Kriscenski. However critics contend that the system has left behind ecological sustainability in favor of short-term economic interests.

According to GeaSphere at least 295 baboons have been killed in plantations in Mpumalanga Province since the start of 2011.

(02/20/2011) The African environmental group, GeaSphere, has lodged a complaint with the Forest Stewardship Council’s (FSC) for certifying tree plantations as sustainable that are culling baboons in South Africa, as first reported by FSC-Watch. The primates are trapped with bait and then shot. According to the complaint, “unofficial numbers from reliable sources state that more than 1000 baboons have been shot over the past 2 years” in Mpumalanga Province. Documents record permits given to cull 1,914 baboons in 13 separate plantations, however Philip Owen of GeaSphere says that plantations have refused to release official data on how many baboons have been killed.

90% of tropical forests managed poorly or not at all

(06/07/2011) More than 90 percent of tropical forests are managed poorly or not at all, says a new assessment by the International Tropical Timber Organization (ITTO).

Shipping firm pledges to disconnect itself from rainforest destruction

(05/25/2011) The Danish shipping giant Maersk pledged this week to stop purchasing containers with floors made from uncertified tropical hardwood, reports Deutsche Welle press. In an effort to reduce illegal logging and combat climate change, the company will be turning to recycled plastic, bamboo, and tropical wood certified by the Forest Stewardship Council (FSC) for its flooring. The Copenhagen-based firm is the first cargo company to transition to ‘green containers’ as part of a sustainable business strategy.

(04/18/2010) The Forest Stewardship Council (FSC), a global certifier of sustainably managed forest, has dropped another Indonesian company for the destruction of rainforests. Asia Paper Resources International Limited (APRIL), has had its certification suspended due to evidence of conversion of rainforests for acacia plantations, the destruction of ‘High Conservation Value Forest’, draining peatlands, as well as continuing conflicts with local communities. The decision was made by the Rainforest Alliances Smartwood, an accreditation program with the FSC.

(10/16/2008) The Rainforest Action Network (RAN) said it would review its support for the Forest Stewardship Council (FSC), a forest products certification standard, over concerns regarding its certification of destructive logging operations. The announcement comes after a bitter campaign waged against RAN by Ecological Internet, a forest activist group.

The FSC is the ‘Enron of forestry’ says rainforest activist

(04/17/2008) On April 7th, Mongabay printed an interview with FSC International Communications Manager, Nina Haase, in which she defended the FSC against criticism leveled at it by various environmental organizations, such as The World Rainforest Movement and Ecological Internet. The interview drew strong reactions on both sides, and Simon Counsell, director of the Rainforest Foundation UK, requested a chance to respond to the FSC’s interview in-depth. In his response, he states that the FSC has created a “‘race to the bottom’ of certification standards”, alleging that the “FSC really has become the ‘Enron of forestry'”.

The FSC responds to its critics

(04/07/2008) Last month, Mongabay.com reported on recent and various criticisms of the FSC (the Forest Stewardship Council). The FSC is an international organization that certifies forest products which, according to their standards, have been harvested in an environmentally-sustainable and socially-responsible manner. Response to the article was significant. It was picked up by the Ecological Internet’s email campaign and was mentioned on numerous environmental web sites and blogs. At the time of the publication, the FSC had not responded to requests for comments. But in the following interview, FSC International Communications Manager Nina Haase answers each criticism separately and addresses several other issues, such as the FSC and climate change, the organization’s monitoring capabilities, and its adaptation to new environmental concerns. Ultimately she responds to the big question raised by critics: is the FSC stamp still credible?

(03/26/2008) The Forest Stewardship Council (FSC) has come under increasingly harsh criticisms from a variety of environmental organizations. The FSC is an international not-for-profit organization that certifies wood products: its stamp of approval is meant to create confidence that the wood was harvested in an environmentally-sustainable and socially-responsible manner. For years the FSC stamp has been imperative for concerned consumers in purchasing wood products. Yet amid growing troubles for the FSC, recent attacks from environmental organizations like World Rainforest Movement and Ecological Internet are putting the organization’s credibility into question.