Asia Pulp & Paper is misrepresenting the greenhouse gas emissions generated through its paper production by several orders of magnitude claims a new analysis of its carbon footprint by the Rainforest Action Network (RAN) and the Japan Tropical Forest Action Network (JATAN).

The report says a carbon footprint analysis conducted for APP by Environmental Resources Management (ERM) failed to account for emissions from conversion of forests and peatlands for plantations. Factoring in these emissions, RAN and JATAN estimate the carbon footprint of APP’s paper production in Sumatra to be in the range of 16 – 21 tons of CO2e per ton of paper, or more than 500 times higher than APP’s estimate. 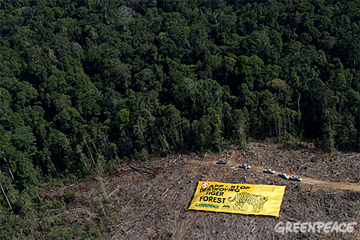 Greenpeace activists unfurl a giant banner “APP-Stop destroying Tiger Forests” in its campaign against Asia Pulp & Paper (APP). Greenpeace said the banner was deployed in an area of active clearing by PT. Tebo Multi Agro (TMA), an affiliate of APP, on the southern part of the Bukit Tigapuluh landscape. Photo courtesy of Greenpeace.

“Emissions from logging or clearing natural forests and from decomposition of peat soils on lands associated with APP’s paper fiber supply were simply written out of ERM’s carbon footprint equations and not counted,” states the report. “At the same time, ERM allowed APP to take credit for the above ground sequestration that occurred on their plantations.”

RAN and JATAN base their estimate on several assumptions:

Overall the report estimates APP’s total net emissions (emissions plus sequestration) at 67-86 million tons of CO2e in 2006, or more than that of 165 countries.

“I think RAN makes some very good points about the boundaries set on the carbon footprint analysis (CFA) – and it is appropriate boundaries that are essential for any CFA to be truly meaningful,” a paper industry analysis who asked not to be named told mongabay.com. “Even with the boundaries as described, this CFA could be a useful benchmarking tool for APP in measuring its progress in GHG reduction as it moves forward.”

But APP reacted strongly to the report.

“It makes grand assumptions on land use change, peat degradation, burning and drainage that it simply can’t back up with facts and science. It applies maximum GHG emission calculations across all APP pulpwood supplier concessions without taking into account the actual state of peat, the various types and compression of peat across concessions (which greatly influences GHG emissions), the true land use state of concessions at the time of plantation conversion, the actual land conversion rate in 2006, and the issue of burning and the impact fire has on GHG emissions. It also discounts the fact that APP’s supplier afforest around 800,000 hectares of denuded, repeatedly burnt, nutrient depleted wasteland in Indonesia. Our suppliers have changed these lands from carbon sources into carbon sinks.”

Lifshitz said APP initially conducted the assessment with ERM with a goal of establishing a baseline to improve operations.

“Without a baseline, we cannot map out a plan to reduce anything,” he said. “This assessment was conducted at a time when no other company in our industry in this part of the world was analyzing their carbon footprint. We were seeking a benchmark for our business operations to build internal improvement programs.”

RAN stood by its report.

“We stand by the findings of our paper that very large and significant sources of land use emissions associated with APP’s paper production in Sumatra were simply excluded from the boundaries of the ERM analysis for APP,” Bill Barclay, Policy and Research Director at RAN, told mongabay.com. “This exclusion leads to a fundamental misrepresentation of APP’s true carbon footprint. If APP would like to challenge our findings, we urge them to release their full report for independent review and verification. We have put forward estimates using the best available science and published field based observations to construct in an open and transparent manner what we believe is a much more accurate representation of APP’s true carbon footprint. APP has yet to do the same.”

ERM, the firm that conducted the carbon footprint analysis for APP, also expressed concern over how the paper products company is representing the results.

“In response to a small number of enquiries, we would highlight the fact that the above work had a defined and limited scope and we would reiterate that the report should not be used without referring to the limitations of the scope.”