Indonesia will rehabilitate degraded forests and plant millions of hectares of new forests to meet its target of reducing greenhouse gas emissions 26 percent from projected levels by 2020, reports Reuters.

Presenting in Jakarta, Forestry Minister Zulkifli Hasan said that 500,000 hectares of new forest would be planted each year from now until 2020, at a cost of 2.5 trillion rupiah ($269 million) per year. Indonesia would also rehabilitate 300,000 hectares of degraded forest every year using funds from international donors. In all Hasan said that Indonesia could expand its forest cover by up to 21 million hectares by 2020, although it wasn’t immediately clear the extent to which new forest would consist of plantations.

“If the scenario described proceeds, if the planting proceeds, we can reach more than 26 percent (in emissions cuts),” Hasan was quoted as saying by Reuters. “If we can also eradicate illegal logging, then the 26 percent will be achieved entirely in the forestry and peat sector.

However reaching these targets will be a challenge. By some estimates illegal logging may account for up to half of logging in Indonesia. Meanwhile palm oil producers are eagerly eying peatlands for new plantations. Last year President Susilo Bambang Yudhoyono opened up some 2 million hectares of peatlands for development. A report released last year by the Indonesian government revealed that degradation and destruction of peatlands (45 percent) and forests (35 percent) account for 80 percent of Indonesia’s 2.3 billion tons of CO2 emissions per year. Emissions are projected to rise to 2.6-2.8 billion by 2020, although Indonesia’s new plan calls for a target of 1.9-2.1 billion tons, a 700-million-ton reduction.

Indonesia hopes to win compensation under a UN program for reducing emissions from deforestation and degradation (REDD). By some estimates Indonesia could earn billions of dollars a year under a carbon trading scheme that counts carbon credits generated from forest conservation activities. 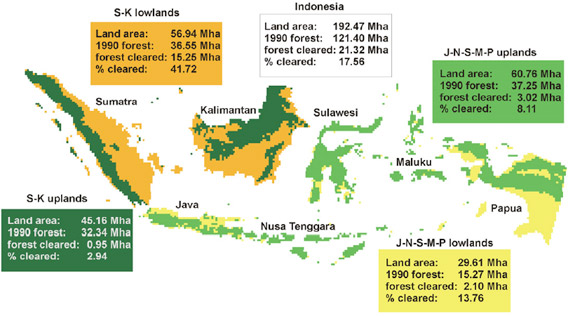