Net deforestation rates have fallen, but some 13 million hectares of the world’s forests are still lost each year according to a new report from the Food and Agriculture Organization of the United Nations (FAO).

The FAO Global Forest Resources Assessment 2005 (FRA 2005) found that annual net loss of forest area between 2000 and 2005 was 7.3 million hectares/year — an area about the size of Sierra Leone or Panama — down from an estimated 8.9 million ha/yr between 1990 and 2000. This is equivalent to a net loss of 0.18 percent of the world’s forests annually.

Forests now cover nearly 4 billion hectares or 30 percent of the world’s land area, however 10 countries account for two-thirds of all forest area: Australia, Brazil, Canada, China, the Democratic Republic of the Congo, India, Indonesia, Peru, the Russian Federation and the United States of America.

Primary forests — that is forests with no visible signs of past or present human activities — account for 36 percent of total forest area, but are being lost or modified at a rate of 6 million hectares a year through deforestation or selective logging.

FRA 2005 also found that new forests and trees are being planted at increasing rates, but plantations still account for less than 5 percent of forest area, it notes. 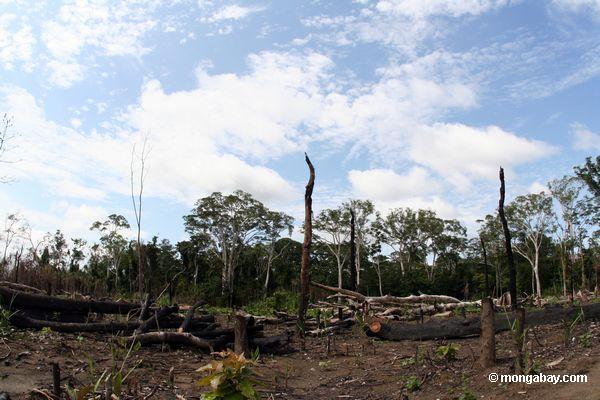 From biological diversity to carbon sequestration

While most forests are managed for multiple uses, FRA 2005 found that 11 percent are designated principally for the conservation of biological diversity — and such areas have increased by an estimated 96 million hectares since 1990.

Around 348 million hectares of forests are used to conserve soil and water, control avalanches and desertification, stabilize sand dunes and protect coastal areas.

One-third of the world’s forests are mainly used for production of wood, fibre and non-wood products, and more than half have production of these products as one of their management objectives, indicating the importance of forest products at the local, national and international levels.

The data for FRA 2005 was provided to FAO by national governments and resource assessment specialists, with more than 800 people involved in the entire process, including 172 national assessment teams.

This article is based on a press release from FAO.