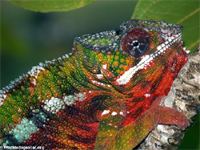 WildMadagascar.org, a leading information site on Madagascar, today announced the availability of educational materials to help students learn about the island of Madagascar.

“While these materials are currently a work in progress,” says Rhett A. Butler, founder of the WildMadagascar.org site, “I think they can be useful for teachers looking to incorporate Madagascar into their lesson plans.”

The main document — titled “An Overview of Madagascar” — takes readers through the history of the island nation, while exploring Magascar’s unique wildlife and culture. Madagascar, the world’s fourth largest island, is one of the more isolated countries on Earth. It sits in the Indian Ocean off the coast of southern Africa from which it has been separated for over 160 million years. Due to this isolation, about 70% of the estimated 250,000 species found on the island exist nowhere else on the globe. The island is home to such evolutionary oddities as lemurs, a group of primates endemic to the island; brilliantly colored lizards including geckos and chameleons; tenrecs, spiny hedgehog-like creatures; and the fossa, a carnivorous animal that looks like a cross between a puma and a dog but is closely related to the mongoose. This assemblage of peculiar and unique animals has made Madagascar a top conservation priority for years but due to the country’s poverty — Madagascar’s average per capita income is $260 while about 70 percent of its population lives below the poverty line and nearly half of its children under five years of age are malnourished — many of these animals are today quite rare and threatened with extinction. It is just this biological diversity that has made Madagascar the setting for a film released by Dreamworks in May 2005.

An overview of Madagascar

Founded in 2004, WildMadagascar.org aims to raise awareness on Madagascar, one of the world’s most biodiverse countries. The island is best known for its lemurs — including the indri, aye-aye, and ring-tailed lemurs — but is also home to many other unique species from tenrecs to colorful chameleons. Proceeds from the site will go toward conservation efforts in the country, which is one of the poorest on Earth.