by Associated Press on 26 September 2005 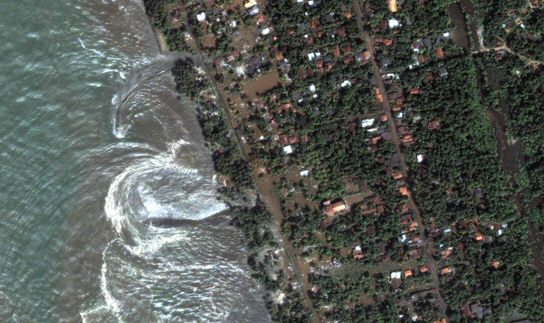 MEULABOH, Indonesia — From atop the coconut tree where he fled to escape the onrushing water, Muhammad Yacob watched the tsunami turn his rice paddy into a briny, debris-strewn swamp.

Nine months later, Yacob and his wife are harvesting their best-ever crop — despite fears that salt water had poisoned the land.

“The sea water turned out to be a great fertilizer,” said Yacob, 66, during a break from scything the green shoots and laying them in bunches on the stubble. “We are looking at yields twice as high as last year.”

Rice, the region’s staple food, is not the only crop thriving on tsunami-affected land in Indonesia’s Aceh province, which suffered the worst damage and loss of life in the Dec. 26 disaster.

But bumper harvests for some mask a very precarious future for most farmers in areas where a massive offshore earthquake caused the sea to crash ashore, experts say.

According to U.N. surveys, 81 percent of the 116,000 acres of agricultural land damaged by tsunami waves in Indonesia, Sri Lanka, Maldives, India and Thailand is again cultivable.

But experts say much fertile land remains under water or sand churned up from the ocean floor. Waves and mud have destroyed or clogged countless drainage systems. So many villagers died that there is a shortage of labor to clear the land and replant.

Yacob says he has received no tsunami aid from the government, and sighs as he points to a mangled threshing machine, rusting where it was tossed by the tsunami waves.

Besides his rice crop, the father of eight lost 1,000 cocoa plants in the tsunami, and has no money for seedlings.

Recovery in the worst-hit areas may take three to five years, said Bart Dominicus of the U.N. tsunami response program.

The largest earthquake in 40 years sent 60-foot waves crashing into coastal communities in Aceh and more than five miles inland. Of the 178,000 who died in the 11 tsunami-hit countries on the Indian Ocean rim, 130,000 victims were in Aceh province.

In the weeks after, many scientists warned it would take years until crops could be planted, noting that fields flooded with salt water usually become unsuitable for most types of cultivation.

“When I first got here there were preliminary figures booted about that half of the land would be lost,” said Helen Bradbury, an agriculturalist with Mercy Corps, a U.S.-based charity. “But I wasn’t so sure and neither were the farmers.”

In at least some cases, their hunch proved correct.

Fields of lush, green rice now dot the coast, and surveys by the U.N. agency paint a more optimistic picture.

Researchers say high rainfall in most Indian Ocean countries washed out the salt quicker than expected. Higher yields in some plots are explained by rich top soil and the composting effect of other organic matter dumped by the tsunami.

“I am not sure the effect will last long, but for now it is a sort of tsunami bonus,” said Bradbury.

The rice harvest is helping to restore some of the pre-tsunami rhythms of life to the countryside, where men like Yacob have farmed for 30 years and more. But it is still littered with damaged buildings and tent camps housing tens of thousands of survivors.

Men and women wearing wide-brimmed hats stand knee-deep in mud during long days of planting and harvesting. Villagers cycle to the fields and smoke from burning stubble makes for blazing sunsets.

The U.N.’s World Food Program says it still expects to be feeding around 750,000 tsunami victims well into next year.

And life remains tough even for farmers with fields full of crops.

Sur Salami has never grown corn higher — his plants stand two feet taller than him. But when heavy rain coincides with a high tide, around half of his 5 1/2-acre plot floods. He says it never did before, and blames the tsunami for changing the coastline.

“The sea is around 50 yards closer now,” he said. “But we cannot lose hope. Whom can I complain to, anyhow?”