NASA science instruments and Earth-orbiting satellites are providing
detailed insight about the environmental impact caused by Hurricane
Katrina. Images and data are helping characterize the extent of
flooding; damage to homes, businesses and infrastructure; and
potential hazards caused by the storm and its aftermath.

NASA, along with academic institutions and partner agencies, is
working to ensure the Department of Homeland Security and the Federal
Emergency Management Agency have the best available information to aid
in responding to this catastrophic event.

NASA’s partner agencies in this endeavor include the U.S. Geological
Survey, the National Oceanic and Atmospheric Administration, the
National Geospatial Intelligence Agency, the Environmental Protection
Agency, and the U.S. Department of Agriculture.

Coordinated assistance by numerous academic institutions and
laboratories working under NASA grants will be employed by the Gulf
Coast relief and recovery efforts to provide geospatial information
useful to first responders and decision makers. 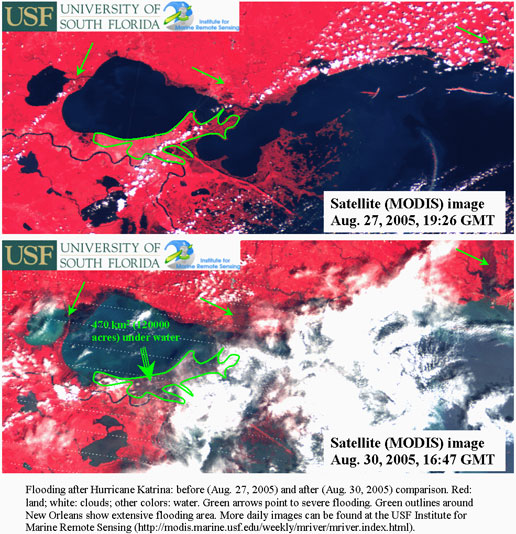 NASA aircraft are providing detailed observations of the disaster
area. The aircraft are taking high-resolution observations that can be
used to assess the amount of damage to communities and the
environment. For example, at the request of the U.S. Geological Survey
in cooperation with the Federal Emergency Management Agency and the
Army Corps of Engineers, NASA’s Experimental Advanced Airborne
Research Light Detection and Ranging system is surveying the gulf
coastline.

This system, carried on a Cessna 310, surveyed the northern gulf
coastline on Thursday. Tomorrow the aircraft is scheduled to fly over
the perimeter and surrounding levee around New Orleans to assist in
damage assessment of the system.

While making its observations of the land, the system has the ability
to “see” through vegetation, like trees and shrubs, to view the land
underneath. Near the coast it can map the beach surface under water.
This will help in the recovery of the shoreline infrastructure;
determine hazard areas and environmental loss.

The Terra, Aqua and Tropical Rainfall Measuring Mission satellites
have already provided Earth observations for land cover and rainfall.
Terra’s Advanced Spaceborne Thermal Emission and Reflection Radiometer
is providing data on the magnitude and extent of damage and flooding
to the U.S. Geological Survey Emergency Response Team through its
Earth Resources Observation Systems Data Center in Sioux Falls, S.D.
JPL is responsible for the American side of the joint U.S.-Japan
science team that is validating and calibrating that instrument and
its data products.

NASA’s Moderate Resolution Imaging Spectroradiometer instrument on the
Terra and Aqua satellites provided images of flooding, including pre-
and post-disaster comparisons. Data from NASA’s QuikScat satellite,
developed and managed by JPL, was one source of wind observations used
by the National Oceanic and Atmospheric Administration’s Hurricane
Research Division to analyze the wind field of the storm and to track
its path.

Another NASA satellite in use is the Earth Observing Mission 1. The
Advanced Land Imagery multispectral instrument on this satellite
provided land use and land cover observations useful in determining
hurricane damage areas and in aiding in recovery, response and
mitigation.

NASA satellites are used to improve weather predictions and to study
climate and natural hazards. The knowledge gained during these
missions aids assessment and recovery operations.

For satellite images and additional information on the Web, visit: http://www.nasa.gov/hurricane;
and http://www.aoml.noaa.gov/hrd/Storm_pages/katrina2005/wind.html
.

For information about the Advanced Spaceborne Thermal Emission and
Reflection Radiometer and QuikScat spacecraft on the Web, visit: http://asterweb.jpl.nasa.gov/index.asp;
and http://winds.jpl.nasa.gov/missions/quikscat/index.cfm.

For information about NASA and agency programs on the Web, visit: http://www.nasa.gov/home.

JPL is managed for NASA by the California Institute of Technology in Pasadena.
Alan Buis (818) 354-0474