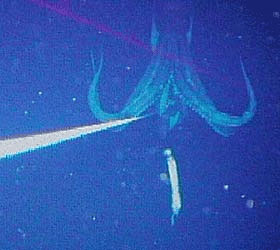 Published photo of adult Architeuthis dux in the wild, from Dr Tsunemi Kubodera, of the National Science Museum in Tokyo, and Kyoichi Mori, of the Ogaswara Whale Watching Association. The eight-meter-long Architeuthis is attacking prey hung by a white rope off the coast of Japan’s Ogaswara islands.

For the first time ever, scientists have observed a giant squid in the wild.

Two Japanese scientists, Tsunemi Kubodera and Kyoichi Mori, report in the Proceedings of the Royal Society B [the B standing for the biological sciences] that they have made the world’s first observations of a wild giant squid.

Working off the Ogasawara (Bonin) Islands, about 600 miles south of Tokyo, Kubodera and Mori photographed the monster with a robotic camera at a depth of 3,000 feet.

Giant squid are marine mollusks related to cuttlefish and the octopus. They are deep-ocean dwellers that can grow to at least 10 m (33 ft) for males and 13 m (43 ft) for females, although there are undocumented reports of specimens of up to 20 m (66 ft).

Relatively little is known about the biology of the giant squid. Scientists do know that one of the squid’s chief predators is the sperm whale, a large, toothed whale.