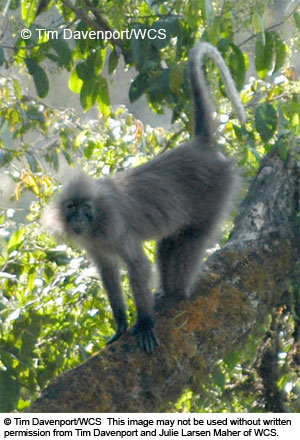 The Highland Mangabey is the first new monkey species discovered in Africa in more than 20 years. Its natural habitat is threatened by logging, hunting and unmanaged resource extraction. If you are interested in making a contribution to help protect this new species and its unique habitat, please contact Dr. Davenport. For more on this exciting new discovery take a look at New monkey discovered in Tanzania

Called the “Highland Mangabey” (Lophocebus kipunji), this long-haired forest primate was first discovered by conservation biologists from the Wildlife Conservation Society (WCS) on the flanks of the 2961 m (10,000 ft) volcano Mt. Rungwe and in the adjoining Kitulo National Park. Remarkably, this highly secretive animal was later also found by another team working independently more than 350 km (230 miles) away. The discovery is described in the leading journal Science.

“This discovery proves that there is still much to learn about the more remote and less well-known areas of Tanzania, and Africa as a whole”, said Dr Tim Davenport who directs the WCS Southern Highlands Conservation Program, and who led the team of Noah Mpunga, Sophy Machaga and Dr Daniela De Luca who found the monkey. “Having been so involved in the creation of the Park and the conservation of Mt. Rungwe, it has been very exciting for us to help reveal more of their secrets. The real challenge now though, is to try and conserve them,” he added. 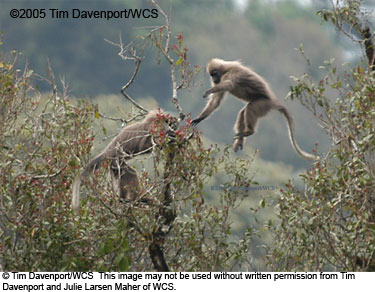 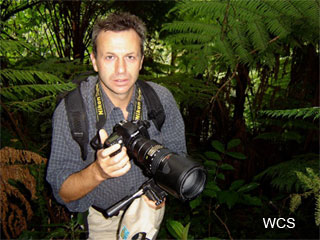 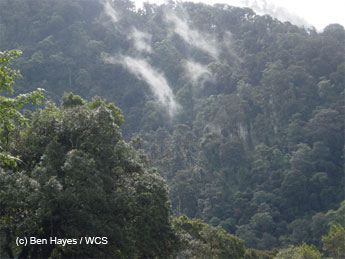 In order to help protect the critically endangered’ Highland Mangabey, the Wildlife Conservation Society has set up the WCS Kipunji Fund. For more information on how you can support this work, please contact

. You can also contribute through this link.

The Southern Highlands Conservation Program (SHCP) was started by WCS in 2000 to conserve important upland habitats and species across southwest Tanzania. The Highlands lie between Lakes Nyasa/Malawi and Tanganyika on the junction of the eastern and western arms of the Great Rift Valley. Sites of particular interest are plateau grasslands, montane forests and crater lakes including Kitulo Plateau, Mt Rungwe, Livingstone Mts, Mbisi, Mporoto and Mbeya Range.

With a staff of 20, the SHCP carries out a variety of research, protected area management support, and community conservation initiatives. Successes include bringing the international trade in orchids to light, involvement in the gazettement of Kitulo Plateau as a new and innovative national park, and comprehensive biodiversity and socio-economic surveys of Mt Rungwe, Kitulo and other unexplored areas. An environmental education component reaches thousands of people targeting schools and village environment committees. The SHCP provides support to District and Regional Governments as well as Tanzania National Parks. Indigenous tree nurseries have been developed in Rungwe, Sumbawanga and Mbeya, and over 150,000 seedlings have been raised and planted. The Program also works with local NGOs in tourism development, awareness raising, fuel efficiency and capacity building. The unique flora and fauna of the Southern Highlands are being characterised through biodiversity surveys of plants, mammals, birds, reptiles, amphibians, fish and invertebrates. The endemic and highly endangered Abbott’s Duiker is the focus of a novel conservation strategy targeting hunters, and the distribution, threats and status of all carnivore species are being monitored. Ecological research of important habitats are identifying the key threats to them. Furthermore, in-depth socio-economic studies are helping to determine natural resource use by communities across the region.

The Southern Rift Program is a new regional initiative building on current WCS projects including the Southern Highlands Conservation Program (SHCP) in Tanzania and the Mt Mulanje Biodiversity & Monitoring Project in southern Malawi. Conservation work in the Mozambique Mts and the Nyika National Park in northern Malawi are being planned. Regarded biologically as globally outstanding’, the Southern (or Nyasa) Rift begins at the junction of the Eastern and Western (Albertine) Rifts in southwest Tanzania. It extends southward through Malawi and central Mozambique.

Through the management of these projects and the development of additional ones, the Southern Rift Program aims to assist in the conservation of important habitats and species across the region.

You can learn more about the Highland Mangabey and the WCS Southern Highlands Conservation Program at kipunji.org and the Wildlife Conservation Society at wcs.org.

You can help protect the Highland Mangabey and its unique habitat, by contacting Dr. Davenport or using this link.

Dr. Davenport has granted mongabay.com the use of these pictures. You will need to contact him about running these images and photographs on other sites.