The recent discovery near Mount Everest of “super large” deposits of lithium, the key element in the batteries powering electric vehicles, has raised concerns over the fate of water resources in the region.

While the deposit could provide much-needed supplies of the metal to fuel the fast-growing market for EVs and battery storage applications, mining in the Himalayas could have adverse environmental consequences, especially on fresh water, according to experts.

The Chinese Academy of Sciences estimates the site could potentially produce a million tons of lithium oxide, according to ScienceNet.cn, a website backed by the CAS. It is located some 3 kilometers (1.8 miles) from Qiongjiagang, a peak in the Chinese side of the Everest region; the exact location has not been made public. Reports suggest that the site, located on the Tibetan Plateau, could potentially become the third-largest lithium mine in China.

Demand for lithium has skyrocketed around the world. Although China is one of biggest producers of lithium in the world, it imports about 70% of the metal it needs from overseas.

While mining of various metals has been carried out in the Himalayas for millennia, China began industrial-scale mining operations in the region only in recent years, following the discovery of large deposits of gold, silver and other precious metals worth an estimated $60 billion. Those operations also prompted concerns over the environmental impact and potential geopolitical implications.

Glaciologist Mauri Pelto, a professor at Nichols College in Massachusetts, U.S., who monitors glaciers around the world using satellite imagery, said mining the newly found lithium deposits would be an energy-intensive and water-intensive operation. “You need energy, most likely hydropower, not just to move the overburden and the ore, but also to concentrate the ore, and both require water.”

The water would have to come from the glaciers nearby, and a reservoir would also most likely need to be built, he added. Extensive mining in the region might create freshwater stresses, affecting both the Yangtze and the Yellow rivers, China’s two major sources of fresh water, which depend on the glacial meltwater from the Qinghai-Tibetan Plateau. 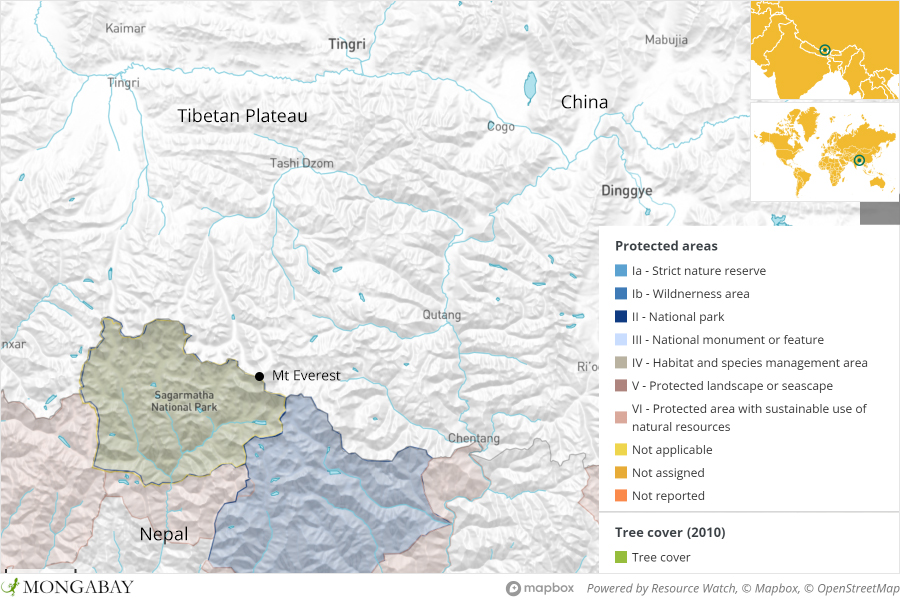 Pelto said he believes the site is located near Nangpa-La, a mountain pass crossing the Himalayas and close to a glacier on the north side of Cho Oyu, the sixth-highest mountain the world.

The Himalayan region, one of the most fragile ecosystems in the world to global warming, is a source of water for billions of people living downstream in South and Southeast Asia.

Qin Kezhang, director of the Key Laboratory of Mineral Resources Research of the Chinese Academy of Sciences, told ScienceNet that “the location of the mining area is convenient and has a rural cement road. The positive terrain is conducive to mining. The ore body is exposed, and there is no need for deep excavation. It is far away from the core nature reserve of Mount Everest.”

Pelto, however, questioned just how logistically feasible such an operation would be. “It’s about both the altitude and the distance they have to transport the material. You’re not going to be able to set up a processing facility anywhere near the mine, and it would be interesting to see if it’s still economically viable.”

He added that although procedures could be developed to mitigate environmental concerns, any mining activity could potentially affect the local water resources as there’s a danger of contamination and leaching.

Qin said the lithium mine is still in the “pre-investigation” stage. He told ScienceNet that more research is needed to prove the viability of the deposit and develop a detailed mining plan.

The Chinese Ministry of Ecology and Environment didn’t respond to a request for comment by press time.