by Malavika Vyawahare on 2 March 2021

That forests are good for the environment is a no-brainer. What isn’t as clear-cut: how do newly planted woodlands affect water availability?

New research from Madagascar has drawn up some surprising answers. “Young forests have more or less the same benefits as a mature forest,” Maafaka Ravelona, co-author of a new study, said about forests’ ability to retain rainwater.

The results published in the Journal of Applied Ecology will be welcome news for forest restoration champions. If scrubby forests are as efficient as older ones in retaining water, it means reforestation bestows substantial benefits sooner rather than later.

In response to alarming biodiversity loss and the climate crisis, almost all countries have embraced tree-planting campaigns, including Madagascar, which in 2019 committed to planting trees on 40,000 hectares (100,000 acres) every year.

“Environmental policymakers are getting increasingly excited about restoring forests to sequester more carbon, and ambitious targets are proliferating,” said Julia P.G. Jones, a conservation researcher at Bangor University and one of the co-authors of the paper. “it seems important to know more about the impact of forest restoration on local water supplies, flood risk.”

In Madagascar, slash-and-burn cultivation has laid waste to large swaths of forestland. The country has lost about half of its natural forest cover in a span of decades and faces the unenviable task of reclaiming these degraded lands. But for communities helping to reforest them, tangible benefits are often elusive.

Rice is a staple in the country, which suffers from severe levels of hunger. Without irrigation facilities, it is critical to make the most of the rains. “In terms of poverty alleviation, water resources are very important, especially for local people but also for people living further downstream,” said Ilja van Meerveld, first author of the new paper and a hydrologist at the University of Zurich.

By regulating water flow, forests don’t just boost surface and groundwater reserves; they also rein in the destructive effects of flooding and erosion. “This is a very positive outcome for forest restoration in the tropics, where excess overland flow is a big problem, especially as it is typically associated with soil loss and degradation of already poor soils,” said Solange Filoso, a researcher at the University of Maryland Center for Environmental Science, who was not involved with the study.

To do this meant flying thousands of dollars’ worth of equipment, from infiltrometers to solar panels, to Madagascar. Ravelona said he used instruments, like the Amoozemeter, that he had never even heard of before. He also helped train community members hired as assistants in their use.

“It was not just mental work it was also hard physical labor,” he said, describing how the team ferried heavy-duty gear up and down slippery slopes and amid rain-soaked forests. Ravelona said he constantly worried that the fancy hardware would be stolen or damaged. They had installed expensive solar panels in areas where there is no grid electricity for many miles.

In most field sites, they were met with curiosity and bemusement from villagers. Carrying 20-liter (5-gallon) water containers over treacherous terrain only to tip them into the ground, “you look a little stupid to them,” he said. The fieldwork was tough, said Ravelona, who now works with WWF Madagascar, but ultimately rewarding.

The experiment with the 20-liter water containers helped the team simulate rainfall and measure infiltration rates in different terrains. Through this and long days of careful data collection, they managed to pin down three things: how much water is lost as runoff, what portion is returned to the atmosphere, and what percentage remains within reach of communities.

The work yielded an important insight: in some ways, young forests are even better than old-growth forests at conserving water.

Larger mature trees need more water. They pull water through their roots, use it for photosynthesis and release much of it back into the atmosphere, a process known as transpiration. Fully grown trees with expansive foliage also have larger surface areas on which water collects and then evaporates. The researchers concluded younger forests provide the same services in preventing runoff but use up less water.

Not everybody is convinced by the argument. “The authors’ myopic vision neglects the larger regional and continental scale precipitation recycling potential from forest restoration,” said David Ellison, a researcher affiliated with the Swedish University of Agricultural Sciences. “This myopy seems automatically to rule out any analysis of downwind benefits from greater evapotranspiration production — though their evidence points to its possible importance.”

Van Meerveld recognized that the study did not look at how evapotranspiration impacts rainfall over wider areas. While massive reforestation, for example, in the Amazon, could have significant impacts on precipitation in downwind areas, for the sites in Madagascar studied by the team, these effects were not large, she noted.

“If we start reforesting on a very, very, large scale and we have a lot of trees growing and transpiring a lot of water, then the atmosphere gets more moist because of all this transpiration,” she said. “The systems we looked at in Madagascar, areas that could be reforested, these are relatively small,” she said. 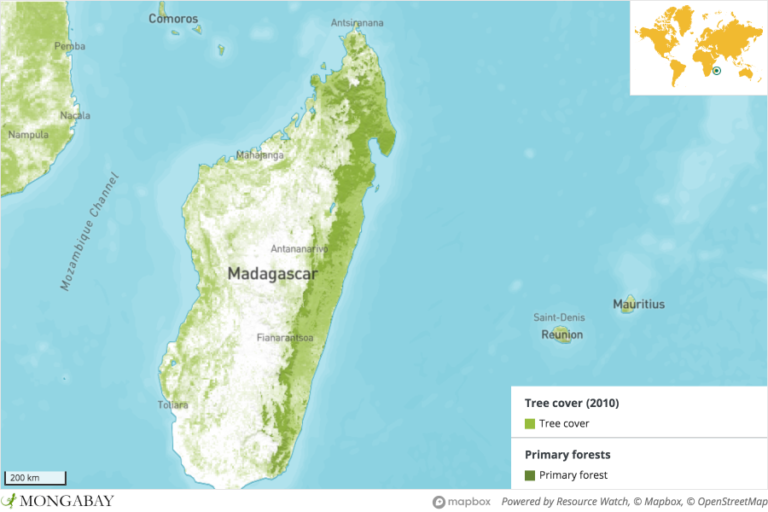 Madagascar, located off Africa’s southeastern coast, is the world’s fourth-largest island, with a staggered strip of tropical rainforest running down its eastern shore and dry forests lining its western coast. However, outside islands of preserved forests, the landscape presents a patchwork of forest, cultivated fields, degraded lands, and regenerating areas. Shifting agriculture practiced by small farmers shapes the lay of the land.

“Downwind benefits are dismissed as illusory and neither assessed nor measured, while downstream benefits take precedence, solely because they are considered one possible outcome,” Ellison said. The criticism raises questions about whether the results would hold in other parts of the world.

What experts agree on is that fully functional forests bring a host of benefits, not just to communities but also wildlife, that tree fallows don’t. What the study shows is that scrubby forests are not to be easily brushed aside.

(Banner Image: The team out in the field near Andasibe in eastern Madagascar. Image courtesy of the p4ges project.)