Fires raze nearly half of Indigenous territories in Brazil’s Pantanal

In September, 164 fires were recorded across Indigenous territories in the Brazilian Pantanal, the world’s biggest wetland. In August, there were more than 200. Nearly half of the certified Indigenous areas in the region have already been subject to fires that cut off villages, destroyed homes and farms, and sent community members to hospital for respiratory problems.

These are the findings of a study carried out by Agência Pública, an investigative journalism outlet, based on satellite date from INPE, the Brazilian National Institute for Space Research. The study analyzed all fire outbreaks reported in the Pantanal this year and showed that the number began increasing at the end of July but really took off in August and September: 72% of all the fires so far this year occurred in these two months.

The satellite data also revealed that in some of the areas hardest hit by the fires, the burning first appeared — and multiplied — on private properties before spreading to the Indigenous territories. Some fires began inside legal reservation areas and native forest on private properties that are supposed to be protected by law and conserved. 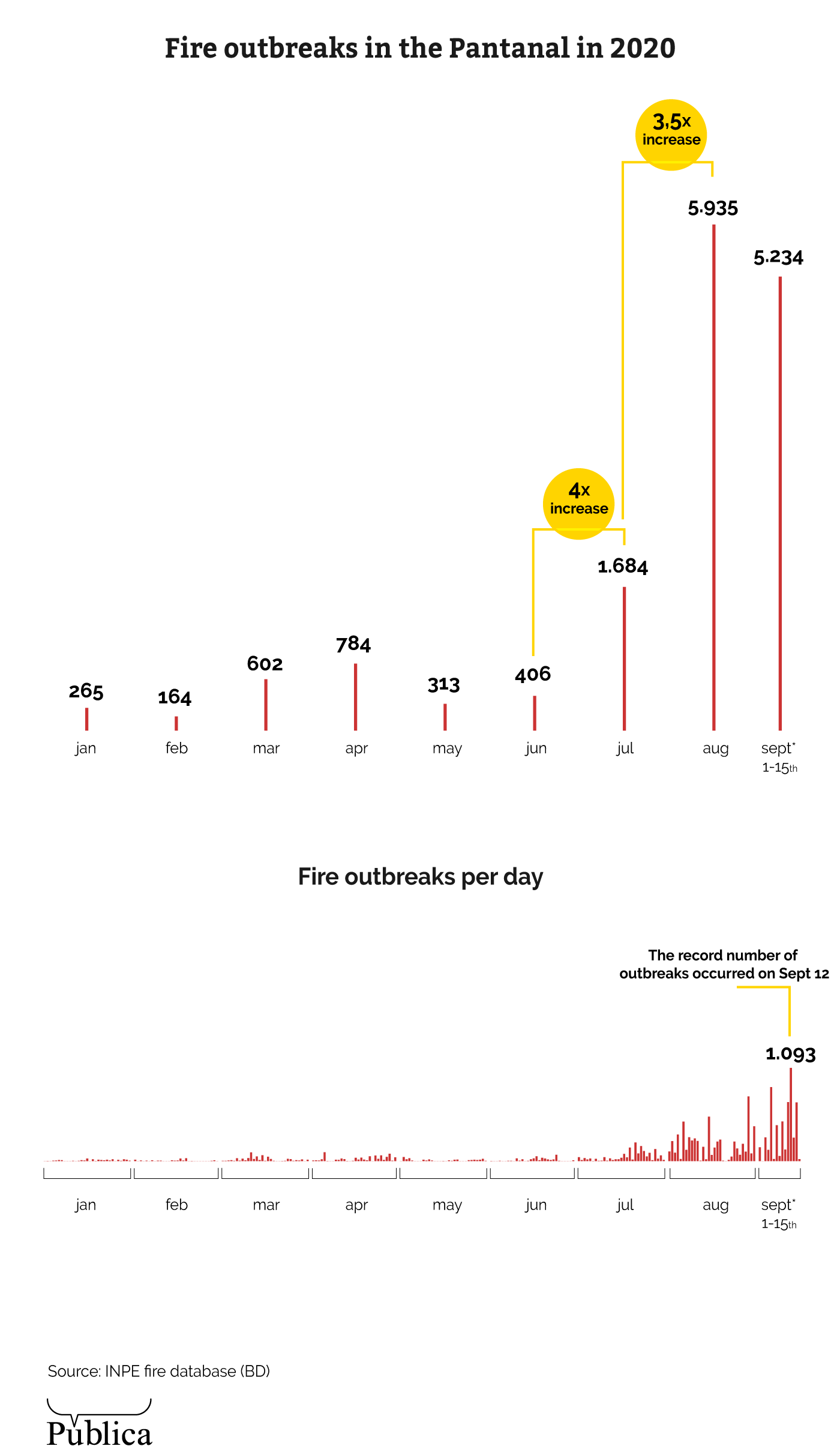 In all, Agência Pública found fire outbreaks inside five of the 11 Indigenous territories in the municipalities that make up the Pantanal. The reserve with the highest number of outbreaks is also the largest, the Kadiwéu Indigenous Territory, home to the Terena and Kadiwéu peoples in Mato Grosso do Sul state. There have been 176 fire outbreaks there since May this year, most of them in August.

Throughout the rest of the Pantanal, there have been reports of fires in three state parks, one national park, one environmentally protected area, two private reserves, and one ecological station.

All of the municipalities in the Pantanal reported fire outbreaks between July and September. Those with the highest numbers were Poconé and Barão de Melgaço in Mato Grosso state; Encontro das Águas State Park straddles these two municipalities.

“The fire began outside the Indigenous territory. When it came, it came very fast, and crossed into our land from one minute to the next,” said Indigenous educator Estêvão Bororo, also known as Estevinho.

Agência Pública sought him out after seeing on satellite images that the Tereza Cristina Indigenous Territory, home to the Bororo people, was covered in fire outbreaks. There have been 86 of them reported in the territory, which lies in the transition zone between the Cerrado grasslands — South America’s second-largest biome — and the Pantanal in the municipality of Santo Antônio do Leverger, in Mato Grosso state. All but five of those outbreaks were reported in the first two weeks of September alone.

“The land is cut through by the São Lourenço River: the left bank of the river caught fire, cut off two villages, and burned a bridge. Then it advanced toward the Córrego Grande village, which was the hardest hit,” Estevinho said. “It came very fast and even surrounded the homes. Even though the houses themselves didn’t catch fire, our leader had to be taken to Rondonópolis because he inhaled a lot of smoke. We have elderly people, pregnant women, new mothers and children here.” 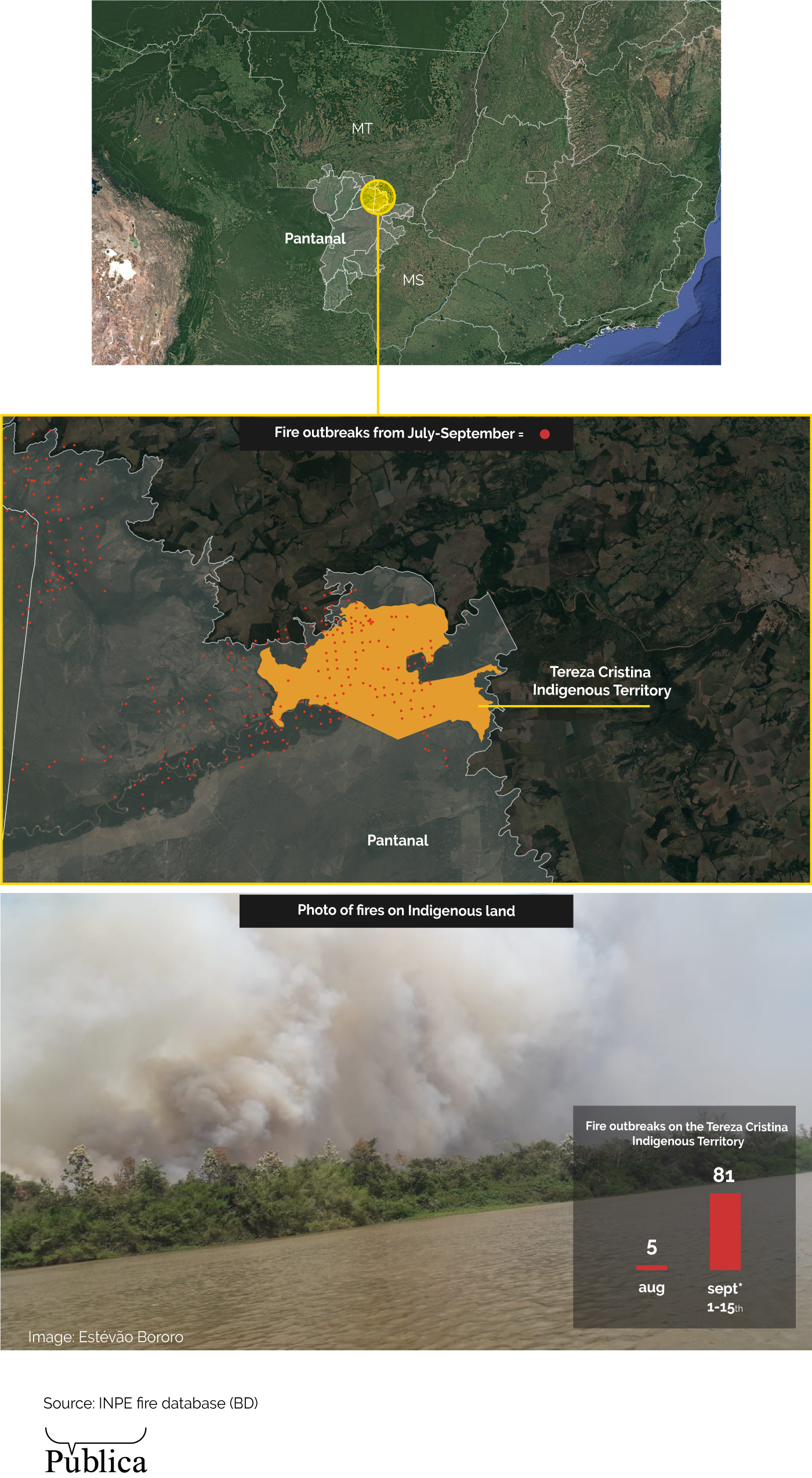 The situation is also critical in Baía dos Guató, the land of the Guató people, in the municipality of Barão de Melgaço, next to Santo Antônio do Leverger. INPE satellite data recorded 57 fire outbreaks in the region in September and 85 in August. Nearly the entire swath of land was consumed by the fires.

“The fires destroyed our farms; they burned our homes,” said community member Alessandra Guató. “They destroyed a very large part of our territory, many trees, animals and birds, harming our fauna and flora and threatening our food safety.

“We are very concerned with our forests because it is there that we gather our sustenance and our traditional medicines. The fires have placed all this at risk,” Alessandra added. “We are not finding the herbs we use to treat illnesses and also the acuri palm, which we use to make the roofs on our traditional homes and some utensils, and to make our traditional chicha drink. Everything is disappearing.”

The Guató territory lies near Encontro das Águas State Park, one of the world’s largest refuges for jaguars, which also burned: there were 456 outbreaks in the park in August and September alone. According to a report from G1, 85% of the park’s area was destroyed by the fires. 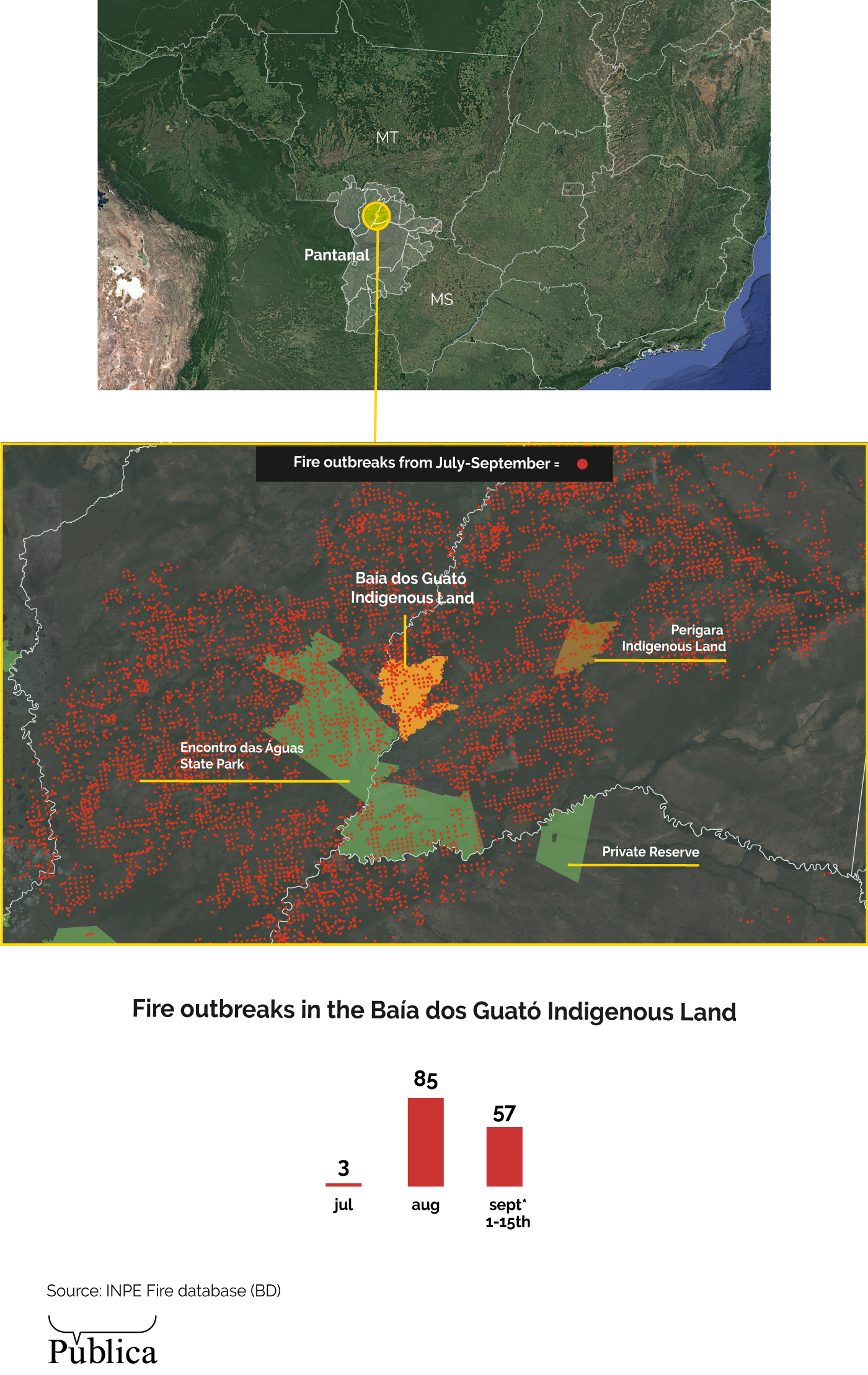 The case of the Guató territory is an example of how outbreaks can start on private properties and then spread to Indigenous territories and conservation areas. At the beginning of August, there were almost no fires north of the Guató land. But soon fires began to be reported in the legal reserves and native forests lying on private properties north of the Indigenous Guató territory. The fires appeared in the territory later. By the end of August, there were fires across almost the entire Indigenous territory, with 36 reported in a single day.

Delays and budget cuts for firefighters

Agência Pública spoke with an agent at PrevFogo, the National Forest Fire Prevention and Combat System, who asked not to be identified because of fear of retaliation. According to the official, meteorologists had warned that fires were intensifying in 2020 due to higher-than-average temperatures and little rainfall.

The official said strategic planning at the fire agency called for early contracting of firefighters to work on prevention efforts. However, the hiring process, which usually begins in mid-April, only began on June 23.

The agent said this delay in hiring prevented the agency from being able to prevent the fires. “We believe this greatly harmed our work. Our plan was to work on prevention in June so we would have a season with less damage than we are seeing now,” the agent said.

Even as they’re affected by the fires spreading across the Pantanal, the Indigenous people are part of the force trying to stop the burning of their territories. According to the most recent information from IBAMA, Brazil’s environmental watchdog, four of the five firefighting brigades in Mato Grosso do Sul state are Indigenous.

Eliane Bakairi, from the Federation of Indigenous Peoples of Mato Grosso (FEPOIMT), said there aren’t enough brigades, especially in the most affected territories like Baía dos Guató and the Perigara Indigenous Territory in Barão de Melgaço. She also said that budget cuts at PrevFogo are affecting their work.

The Indigenous brigades are part of PrevFogo’s Federal Brigades Program, which is part of IBAMA and is tasked with controlling, preventing and combating forest fires. However, according to a report by Deutsche Welle, between 2019 and 2020, the federal government slashed funding for PrevFogo by 58%, or 13.79 million reais ($2.45 million), impacting the hiring of firefighters to prevent and control forest fires.

Under the administration of President Jair Bolsonaro, IBAMA has been imposing fewer fines throughout Brazil for environmental violations, and the Pantanal is no exception. According to data collected by Agência Pública, there was a 71% drop in the number of flora-related fines in the Pantanal in 2019, the first year of Bolsonaro’s presidency, compared to the previous year. Fines in this category are imposed for infractions including deforestation and illegal burning.

The numbers continued to drop in 2020. By the end of August, 21 fines had been recorded in the municipalities inside the Pantanal. It was the lowest number for the period going back a decade. In 2019, there was more than double that figure, 54 fines, issued within this region between January and August.

The number of fines imposed in 2019 fell in 10 of the 16 municipalities that make up the Pantanal, compared to 2018. Among them is Corumbá, the city with the largest number of fire outbreaks reported this season and where an investigation into possible criminal activity related to the setting of the fires is underway.

“People ended up feeling at liberty to commit environmental crimes. This attitude is being reinforced by the president himself,” an IBAMA firefighter told our reporters, speaking on condition of anonymity. The firefighter said the agency has been having difficulties embargoing properties and destroying the machinery used for environmental crimes, which has made control difficult.

In August, Agência Pública revealed a similar situation in the Amazon, where the number of fines imposed has fallen in regions with more deforestation.

Our reporters sought comment from IBAMA and Funai, the federal agency for Indigenous affairs, but did not receive a response.

This article was first published in Portuguese by Agência Pública.