The frog and the university: Meet the niche new species from Sri Lanka

by Dilrukshi Handunnetti on 18 July 2019

A four-year study of streams in the cloud forests of Sri Lanka’s picturesque Knuckles Mountain Range has turned up an unexpected discovery: a new frog species found nowhere else on Earth.

Lankanectes pera, a glistening, chocolate-hued frog, is only the second known species in the genus; the other, L. corrugatus, is also endemic to Sri Lanka. The researchers named it in honor of their alma mater and the oldest university in the country, the University of Peradeniya, affectionately referred to as Pera.

In their paper published in the journal Zootaxa, the researchers identify the new species as being highly restricted to a habitat of about 360 square kilometers (139 square miles) — an area nearly 40 times smaller than the range inhabited by the more widely distributed L. corrugatus.

While there are some subtle physical differences between the two species, it’s in their habitat selection where they differ the most.

L.corrugatus mostly occurs in muddy substrates, including marshes and rice paddies, where they can easily burrow into soft mud and leaf litter. L. pera, however, needs pristine conditions and significant canopy cover.

It dwells in streams flowing through the montane forests in the highest peaks of the Knuckles Mountain Range, at elevations of more than 1,100 meters (3,600 feet) above sea level. It’s found only in the Dothalugala, Bambarella and Riverston regions of Sri Lanka’s central highlands.

The males, generally found under rocks and crevices, give a hint of their presence when they make halting calls during the day, or chorus at night, especially after soft rain that tends to perk them up. 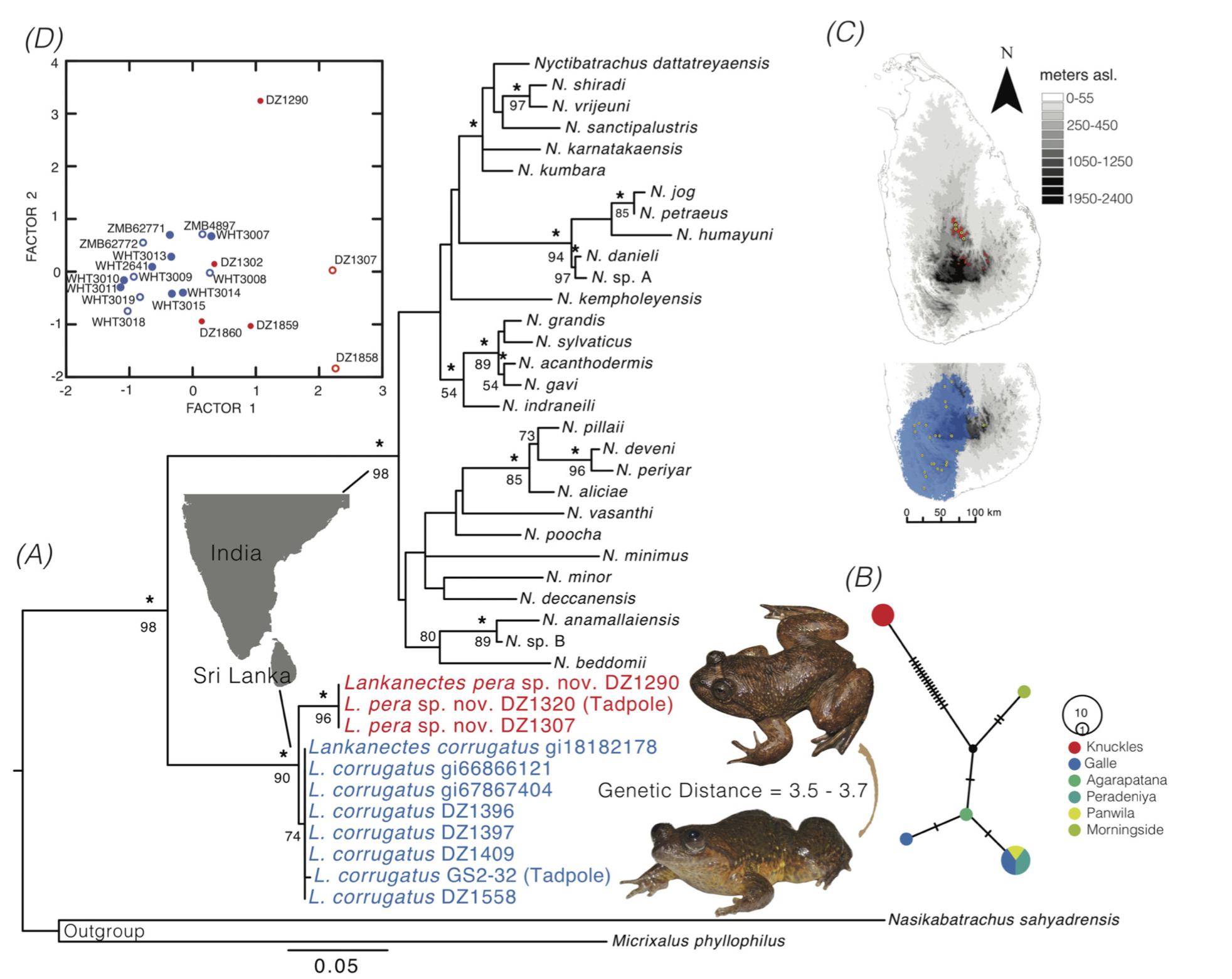 Figure shows two clearly defined clades including L. corrugatus and L. pera, with the latter being different by more than 16 mutational steps from the populations of the former. There is a clear separation between the males with a slight overlap of the females, indicated in filled circles in red (L. corrugatus) and blue (L. pera). Image © Senevirathne et al., 2018.

Based on L. pera’s small area of occupancy, extent of occurrence, and the small population observed during the study, the scientists have suggested a conservation status of critically endangered. In contrast, L. corrugatus occupies a much larger area and has a much bigger population size, making it a species of least concern on the IUCN Red List.

The researchers warn that rapid deterioration of this niche habitat can pose a significant threat to L. pera’s survival.

“Montane forests are shrinking in the face of factors that we cannot directly control, such as global warming, and factors we can control, like encroachment and habitat degradation,” co-author and evolutionary biologist Madhava Meegaskumbura told Mongabay. “The answers need to be local. We need to prioritize this species in conservation efforts by evaluating its status by applying the IUCN red-listing standards.”

“Cloud forest cover is critical for the survival of the species,” said Gayani Senevirathne, the paper’s lead author and a graduate student at the University of Chicago. “Diminishing forest cover will definitely make the habitat unsuitable for this highly specialized forest-stream species.”

enevirathne said the Knuckles range is already renowned as an important refuge for as many as eight micro-endemic species that are largely considered to be critically endangered or endangered.

The paper says the habitat requirements of L. pera are different from those of the highly threatened micro-endemics highlighted so far, and that a future conservation strategy for the amphibians of the Knuckles Mountain Range should consider this new knowledge.

Meegaskumbura said the new species needs “urgent conservation efforts,” as well as further studies into its biology and behavior.

“Beyond the conservation efforts, it will prove interesting to delve into the life history of Lankanectes pera, including its breeding seasons, mating behavior, ability to produce more offspring, development and species ecology,” he said. “This would help in planning its conservation.”

That’s also where the naming of L. pera comes in, aside from being a sentimental tribute to the university, said Senevirathne.

“We also wanted to place this knowledge before the university which has some of the best minds in the fields of sciences and humanities,” he said. “Peradeniya University is best equipped to lead the conservation efforts of the new species. It is also closely located to the Knuckles region, the frog’s habitat.”

Meegaskumbura seconded the notion, adding he hoped that “the university after which the frog has been named would treat the conservation needs of this frog as a priority and play the lead role.”

And the story of Lankanectes might still have a few more surprises in store, Meegaskumbura hinted.

“The habitat of [L. pera] is surrounded by L. corrugatus, the common lowland species,” he said. “This creates a clear genetic barrier for the spread of the species to the other mountain ranges.

“There however could be relict populations that are genetically close to L. pera, especially on the adjacent Central Highlands,” he added. “I would still expect those populations to be somewhat genetically distinct from L. pera.”