JAKARTA — Indonesia’s anti-corruption agency has joined a growing chorus of criticism against a government decision to permit deforestation in a concession at the heart of a bribery scandal.

It was revealed earlier in February that Environment and Forestry Minister Siti Nurbaya Bakar last year approved a permit to convert, or clear, 100 square kilometers (39 square miles) of rainforest in the district of Buol, on the island of Sulawesi. The land in question lies within a concession held by the palm oil firm PT Hardaya Inti Plantations (HIP), owned by business tycoon and politician Hartati Murdaya Poo.

Hartati was arrested in 2012 by Indonesia’s Corruption Eradication Commission, or KPK, for bribing the Buol district chief, Amran Batalipu, to grant her the concession. Both Hartati and Amran were convicted and jailed for the bribery, but the concession remained with PT HIP.

KPK commissioner Laode M. Syarif said the recent move by the forestry minister to accept the company’s request for a forest conversion permit, knowing that it had obtained the concession through bribery, was unacceptable.

“I’ve just heard that the land whose [license] was issued through bribery has already been converted from forest area in the past few months. That’s not acceptable in the eyes of the KPK,” Laode told reporters in Jakarta.

He called on the forestry minister to review the issued permit, stressing that an application made by a company implicated in such a bribery case shouldn’t be considered legal to begin with.

“The Environment and Forestry Ministry needs to do some self-reflection about this,” Laode said.

His remarks come on the heels of similar criticism by environmental activists, who warn the approval sets a bad precedent for other companies that hold concessions obtained through corruption.

“If a company that has been implicated in a corruption case can still get a permit, then it’s a sign that other companies will follow suit,” Zenzi Suhadi, head of legal advocacy at the Indonesian Forum for the Environment (Walhi), the country’s biggest green NGO, told Mongabay.

The revelation about the permit approval has also prompted questions about the government’s commitment to stopping the destruction of some of the last great swaths of tropical rainforest left in the world.

President Joko Widodo last year declared a moratorium on the issuance of new permits for oil palm plantations. The move was a long-awaited response to disastrous fires and haze in 2015 driven by the burning of forests and peat swamps to make way for plantations.

The moratorium applies to new requests for permits as well as projects that have obtained some but not all of the permits needed to begin operating. It also includes a mandate for the national government and local authorities to review plantation licensing palm data.

By all these measures, PT HIP’s permit request should have been rejected. But Siti justified giving the company the green light on a technicality.

She said the company had received what’s known as a principal permit in 1997, which effectively marked the start of its application process for a forest conversion permit. The moratorium, she said, didn’t apply to application processes that had been in the works that long.

“The moratorium has several categories. For those that have in process for a long time, we can’t stop them,” the minister told reporters in Jakarta.

She also alluded to a government regulation signed by President Widodo in late 2015, about land-use changes, to justify her decision. The license obtained by PT HIP from the Buol district administration allows it to operate in a “production forest,” which is earmarked only for logging activity, not for agriculture. An article in the 2015 regulation states that companies that already have such a license can apply for a permit to convert the land-use status of the area from forest to non-forest — i.e., where plantations are allowed — within a year of the regulation being issued.

This exemption is acknowledged in the 2018 oil palm plantation moratorium, effectively grandfathering through land that’s already been planted with oil palms.

Violations since way back

That unearths yet another skeleton: the fact that PT HIP was already cultivating oil palms on land for which it wasn’t permitted to do so.

The company reportedly began clearing forest in the area for plantations as far back as 1994, forcing residents off their land in the process.

Zenzi of Walhi said it was cases like this that showed how easy it was for companies operating illegally to exploit the exemption noted in the moratorium. He said Walhi had been critical of the exemption since it was introduced in the first draft, and continued to insist that it be struck from the moratorium.

Most plantation companies operating under this model are active on the Indonesian part of Borneo island, according to Walhi data, with the province of Central Kalimantan alone home to more than 6,000 square kilometers (2,300 square miles) of forest areas already earmarked for conversion by the concession holders.

Asked by Mongabay whether her ministry would review its permit approval for PT HIP in light of the controversy, Siti said her office had sent a team to the site to “gather data,” including whether the area in question still contains “primary forest” — forest of the highest quality. Under the 2018 moratorium, permits cannot be issued to clear primary forest under any circumstances.

Before Siti issued the permit, her ministry had identified, on maps, a significant chunk of primary forest in the proposed forest conversion plot. The permit that was issued omitted this chunk of forest, which would have amounted to about 60 percent of the area that was approved for conversion.

But independent analysis has found that the land under PT HIP’s permit still contains primary forest. Eighty percent of the permit area, according to the NGO Greenomics, consists of high carbon stock (HCS) forest, or viable natural forest. Of this HCS forest, 5 percent is identified as primary forest, and 75 percent as secondary forests. 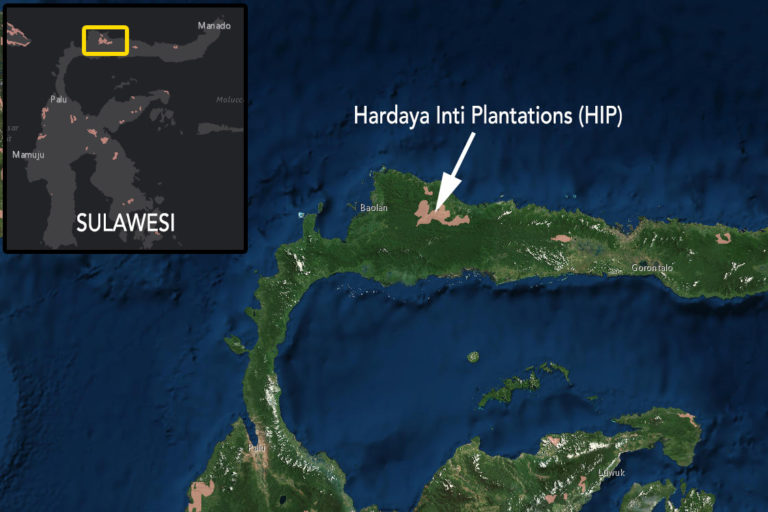 Abdul Haris Lapabira, the head of the Walhi chapter in Central Sulawesi province, where Buol district is located, said the forestry ministry’s decision to review the facts on the ground showed just how riddled with problems the whole case was from the beginning.

“The ministry still has its doubts” about the legality of the forest conversion permit, he told Mongabay.

Those doubts stretch back to at least 2013, the year after PT HIP’s Hartati was arrested for bribery. In its investigation of the concession at the heart of the bribery case, ministry officials discovered that the company had also converted 11 square kilometers (4.3 square miles) of forest into palm plantations. It issued a letter to the Buol administration that year, ordering it to halt the company’s operations in the forest.

But nothing came of this, and two years later, in 2015, the ministry formally dropped its probe into PT HIP’s operations in Buol. The reason? The statute of limitations, 15 years from the issuance of the principal permit in 1997, had run out. Yet the company continued to cultivate oil palms in the forest without the requisite permit.

“When there’s illegal activity taking place inside forest areas, there should be law enforcement action,” Walhi’s Haris said. “But the ministry only discovered the land clearing in 2013. That means more than 15 years had passed without any report. After 15 years, the case was deemed to be expired.”

Following the termination of the investigation, the forestry ministry effectively went from overlooking the company’s violations to tacitly enabling them. It sent a letter to forest gazettement agency in Buol to speed up the mapping process for the issuance of PT HIP’s forest conversion permit.

“This means the ministry as a whole is complicit in the forest conversion process,” Haris said. “Why would the ministry allow illegal activities inside forest areas when the findings [of violations] are obvious?”

The ministry did not respond to Mongabay’s requests for comment on this question.

Haris said the whole situation was particularly damning for the ministry, showing it to be fully aware when it issued the forest conversion permit last year that PT HIP’s operations on the ground were problematic. And it did so despite opposition from the Buol administration itself.

The current Buol district chief, Amiruddin Rauf, has long expressed concerns about the expansion of the palm oil industry in his district. One of his first orders of business upon taking office in 2013 was to cancel 10 plantation permits issued by Amran, his jailed predecessor. In a 2014 interview with Mongabay, Amiruddin declared that no more palm oil companies would be allowed to invest in Buol, and objected specifically to PT HIP’s plans to expand its operations in the district.

He has repeatedly said the district can’t accommodate more plantations without sacrificing its environment, pointing to the large swaths of degraded land left from deforestation by plantation companies. Much of the land being eyed by PT HIP, he said, was the same area that his administration intended to use as community-run farmland and water catchment.

But those plans have now been sunk, thanks to the forestry ministry’s approval of PT HIP’s forest conversion permit, Amiruddin said.

“Water catchment is [important as] a source of irrigation,” he said as quoted by local media. “If this palm oil plantation is opened up, then hundreds of hectares of rice fields in Buol will become dry.”

He also noted that the company had a business permit for nearly 228 square kilometers (88 square miles) of land, more than the 200-square-kilometer limit per company per district imposed by the land ministry.

“If the company gets another 10,000 hectares” — as allowed under the forest conversion permit — “then it means that Hardaya Inti Plantations controls 32,000 hectares [320 square kilometers, or 124 square miles] of palm oil plantations,” Amiruddin said. “It means that it’s violating the regulation from the land ministry.”

He reiterated his disappointment with the forestry ministry’s decision, which he said went against the spirit of the palm oil permit moratorium.

“When the [moratorium] was issued, we were ecstatic and happy because we thought the hegemony over land by those who own capital had been stopped,” Amiruddin said. “But that [joy] didn’t last long, with the issuance of the forest conversion permit by the forestry ministry.”