“By themselves the figs could build a forest,” ecologist EJH Corner wrote almost a century ago. Now a fascinating book, Gods, Wasps, and Stranglers: the secret history and redemptive future of fig trees (titled Ladders to Heaven in the UK), delves anew into this tropical species’ biology and key ecological role, as well as its deep cultural (and spiritual) place in human history. Author Mike Shanahan also describes in detail how figs and wasps rely on each other for survival, and devotes chapters to figs’ incredible ability to grow virtually anywhere and feed many species of animals, thereby providing footholds for other colonizing plants, from trees to epiphytes, and the creatures that feed on them in turn.

Mongabay asked Shanahan how figs are being harnessed to regenerate degraded tropical forestland.

AN INTERVIEW WITH MIKE SHANAHAN

Mongabay.com: I’ve always thought of strangler figs as parasites on innocent trees, but your book suggests that their ecosystem services far outweigh that pejorative. What benefits do figs supply? 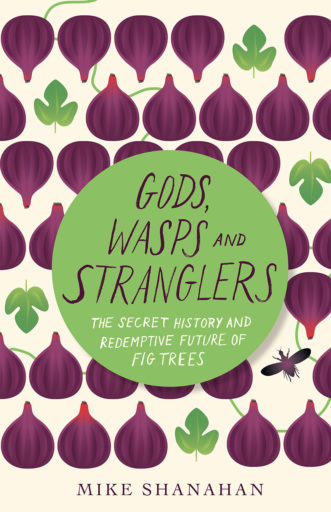 Mike Shanahan: Strangler figs have bad press but they are trees of life, not death. More than once a year, they can produce as many as a million figs and these huge crops attract a great variety of fruit-eating animals such as birds, fruit bats and primates.

One aspect of fig biology that makes these plants particularly important is that they can produce their figs at any time of year, sustaining animals when other fruit is scarce. This helps explain why, overall, more than 1,200 species of birds and mammals have been recorded eating figs – far more than any other kind of fruit.

But the benefits don’t end there. The strangler figs support animals that disperse the seeds of thousands of other tree species. Research from parts of South and Central America, Africa and Asia suggests that without year-round fig production, many of these other animal and plant species would suffer.

That’s at the macro-scale. Zoom in on the figs again and you’ll find they themselves are full of life. Biologist Frode Ødegaard recorded 78 species of plant-eating insects on a single Ficus maxima fig tree in Panama. Stephen Sillett and colleagues found 127 species of plants called bryophytes (mosses and liverworts) in the crowns of just six Ficus tuerckheimmi trees in Costa Rica.

Mongabay.com: It has often been said that once a rainforest is cleared, it can never come back. Can you describe projects involving figs that challenge this notion?

Shanahan: In Costa Rica and Rwanda, researchers have been chopping branches off mature fig trees and planting them as ‘instant trees’ in deforested areas. The idea is that they will attract seed-dispersing animals and serve as central points around which biodiversity blooms. It is early days for this research, but initial results on abandoned cattle pastures in Costa Rica show that the planted trees produced figs within a year. I expect that within two more years, there will be a small forest forming there.

Wild fig trees are magnets to biodiversity. Plant them and other species, both plant and animal, soon follow. In Thailand, researchers have used fig trees to accelerate rainforest regeneration in an area of a national park that people had cleared to grow crops. Within a few years of them planting fig trees there, the number of bird species increased from 30 to 87. Dozens of other tree species returned as the figs lured in seed-dispersing birds and mammals.

Mongabay.com: Do any other tropical trees or plants rival their potential to regrow tropical forests?

Shanahan: Several kinds of plants encourage rainforest regeneration by shading out weeds, and producing fruit that attract animals that disperse the seeds of other tree species. But the figs are really superlative in this regard. They can germinate in bare ground, volcanic lava, and cracks in concrete. Their roots can even split rocks apart. They grow fast, breaking up the substrate and encouraging soil to form. These plants produce figs quickly and, critically, they produce figs year round.

When Sergio Guevara and colleagues in Mexico collected all the seeds that fell beneath five fig trees standing alone in fields where cattle roamed, they identified 149 different plant species, mostly those dispersed by birds and bats. They also observed 47 species of fruit-eating birds visiting those fig trees.

This was in a landscape that was once wild forest, but which is now utterly agricultural. The researchers put up fences around the fig trees to keep the cattle away and within three years, dozens of tree species had naturally returned. Some were already five meters tall. It’s a phenomenal demonstration of the power of fig trees to accelerate reforestation.

Mongabay.com: Each kind of fig relies on a certain species of wasp to pollinate it. What happens if a warming climate is deleterious to the wasps’ biology, as has been shown in the lab?

Shanahan: All fig species depend on their own fig-wasp species to pollinate their flowers. If the wasps disappear, the figs would have no seeds and wouldn’t ripen, depriving many birds and mammal species of a critical food source.

Although fig-wasps survived 80 million years of change, including periods warmer than today, some fear the current trajectory of global warming will put the fig/fig-wasp relationship at risk.

When researchers in Singapore raised the temperature in a lab by just a few degrees, the lifespans of several fig-wasp species fell dramatically. While this experiment showed that adult fig-wasps are vulnerable to extreme heat, it did not replicate the gradual nature of global warming.

Fig-wasps may well be able to adapt to rising temperatures. They have very short generation times – just a few weeks – as well as large numbers of offspring. This means that when environmental conditions change – as they are doing – any fig-wasps whose natural genetic variation helps them to survive should produce more offspring, thereby enabling the fig-wasp species to adapt.

Fig biologist Steve Compton suggests the wasps will therefore adapt to rising temperatures through changes in either their physiology or their behavior — like flying at night instead of the heat of the day.

How well the fig-wasps survive in a warming world will depend on how high and how fast temperatures rise, and that is in our hands.

More immediate threats to fig trees, also posed by us, are deforestation and the loss of their seed dispersers. Many of the larger animals that provide this service are threatened by hunting and habitat loss.

As to climate change, I’m more concerned about humanity’s limited capacity to adapt and our slow pace of removing carbon from the atmosphere. The good news is that fig trees can help us to do both.

Mongabay.com: Just as figs and wasps rely on each other, figs and binturongs (aka bearcats) are said to also lean heavily on each other since the latter is such a prolific consumer of figs and therefore a key spreader of their seeds. What other animals are also important for seed dispersion?

Shanahan: Binturongs are shaggy-haired nocturnal creatures that inhabit rainforests in Southeast Asia. They depend heavily on figs for their diet and spend nearly all their time high up in the rainforest canopy. This makes them particularly important dispersers of strangler fig seeds, which need to germinate in nooks and hollows on tall rainforest trees.

There’s a myth circulating that binturongs are among the only animals that disperse strangler figs, but in reality a huge variety of birds and mammals also pass strangler figs intact and capable of germinating, so long as they land in the right place on a host tree.

Among the birds, some of the most important seed dispersers of strangler figs include hornbills, barbets and fruit doves. Among the mammals, many primates and fruit bats play this role. Like the binturong, many of these animals depend heavily on figs, eating little else for much of the year. But, to my mind, few are as cool and curious as the binturong.

Mongabay.com: How are fig restoration projects possibly useful to climate change mitigation efforts? Do you think they should be included in ‘carbon farming’ schemes?

Shanahan: Mitigating climate change will require a rapid increase in forest cover in the tropics. While plantations have a role to play, more natural forests are also good for conserving biodiversity and providing resources and livelihoods to local communities. It makes sense to include native fig trees in any efforts to reforest land in the tropics and subtropics because they accelerate progress, benefiting both people and wildlife.

I saw this in action in South Africa in 2011. The municipality of Durban was using several species of wild figs, among other plants, to encourage reforestation of what was once a landfill site, and prior to that a landscape of sugarcane plantations. By boosting forest cover and storing carbon, the city was offsetting carbon emissions that resulted from South Africa hosting the World Cup the previous year. The project created jobs, paying local people to collect seeds, grow trees until they were ready to plant, and then plant them on the site. There has been a huge increase in biodiversity and thousands of tons of carbon pulled out of the atmosphere.

On the ‘carbon farming’ side of things, fig trees are already used in agroforestry systems around the world. They provide shade for other plants, livestock and people. Their foliage provides fodder and, along with their roots, bark and latex, is a source of several traditional medicines. People have long had plenty of reasons to keep fig trees alive even when they clear land. In fact, around the world cultures have developed taboos against felling fig trees. In Africa, Asia, South America and the Pacific, fig trees have become central to religions with connections to gods and spirits. I don’t think this is a coincidence. I think it has an ecological basis with deep roots in our distant past.

Mongabay.com: How are drones being investigated as a tool to reforest lands with fig trees?

Shanahan: It takes time and money to raise fig trees from seeds in nurseries, and it takes a whole lot of human energy to carry them up long distances, over rugged terrain, to plant them out in land that is available for reforestation. When you think about the scale at which reforestation needs to happen it is clear that even fig trees, with all their superpowers, need some help. In Thailand, biologist Steve Elliott is trying to overcome these challenges by getting drones to deliver the seeds, each one packaged in a hydrating gel to give it the best chance of germinating upon delivery. That’s what it has come to, robots in the rainforest.