Brazil: deforestation in the Amazon increased 29% over last year 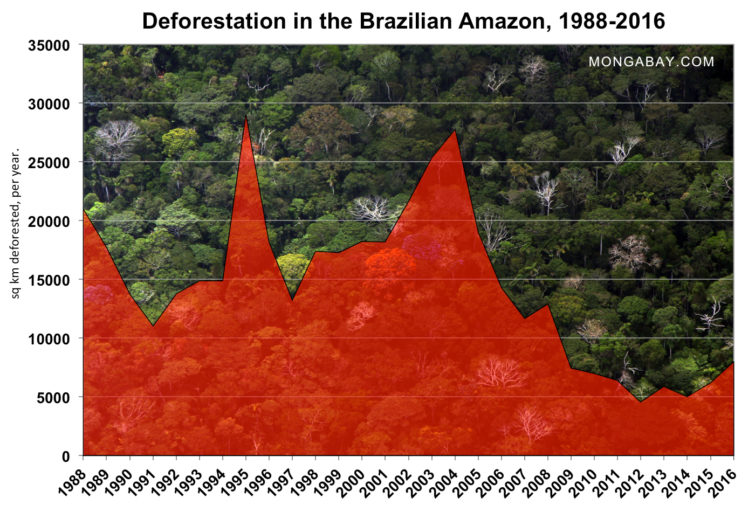 Deforestation in the world’s largest rainforest jumped 29 percent over last year, representing a sharp increase over the historically low deforestation rate seen just five years ago and the highest level recorded in the region since 2008, reports the Brazilian government.

The numbers, released by Brazil’s National Space Research Institute INPE on Monday, show that 7,989 square kilometers of rainforest were destroyed between August 2015 and July 2016. The loss is equivalent to an area 135 times the size of Manhattan or the combined land mass of the American states of Connecticut and Delaware.

The data, which is still preliminary, suggests that the annual rate of primary forest loss in the Brazilian Amazon has climbed 75 percent over its 2012 level, which was the lowest since annual record keeping began in 1988.

Last year’s deforestation was concentrated in the states of Para (38 percent), Mato Grosso (19 percent), and Rondonia (17 percent), which account for much of the region’s cattle and soy production. Deforestation increased most sharply in Amazonas, which contains the largest area of primary rainforest in Brazil.

The news is unsurprising. For months, both Imazon, a Brazilian NGO, and INPE have been reporting month over month increases in forest clearing relative to the year earlier period via their respective deforestation alert systems.

Environmentalists fear that the back-to-back rise in annual deforestation represents a reversal of Brazil’s progress in curbing Amazon forest destruction.

“The increase in deforestation rates can be linked to signals from Brazil’s government that it will tolerate the destruction of the Amazon,” Cristiane Mazzetti, Greenpeace Amazon Campaigner, said in a statement. “In recent years, public environmental protection policies in Brazil have weakened. For example, very few protected areas and Indigenous Lands have been created, and a new Forest Code was approved in 2012 that gives amnesty to those who committed illegal deforestation.”

Beyond political efforts to roll back environmental regulations, rising deforestation may be fueled by dry conditions in the Amazon and a weakened Brazilian currency that makes agricultural exports more profitable.