On the outskirts of Silicon Valley, in an unincorporated part of Los Gatos in the heart of the Santa Cruz Mountains, I’m scaling a 200-foot tall, somewhere between 600-1000 year old redwood tree named Joe. With the tree’s leafy green foliage ringing all the way down its massive trunk, the long drop to the forest floor is well-disguised from my present perch of 180 feet.

I have been afforded this unique opportunity care of Tree Climbing Planet, an organization that arranges and runs tree climbs, and an extremely generous individual, who owns the private land we’re on today. The owner has allowed TCP participants to climb this tree once or twice a year in very limited numbers since 2008.

Tree Climbing Planet is a 6-year old organization headed up by Tim Kovar, a master climbing instructor who got started at Tree Climbing International back in the early nineties. The goal of his organization is simple: get people into trees safely and reconnect them with the natural world. Tim leads climbs all over the United States, with a few annual trips in the Brazilian Amazon as well, and boasts getting over 10,000 people up in the trees—a significant portion of whom had no prior climbing experience. 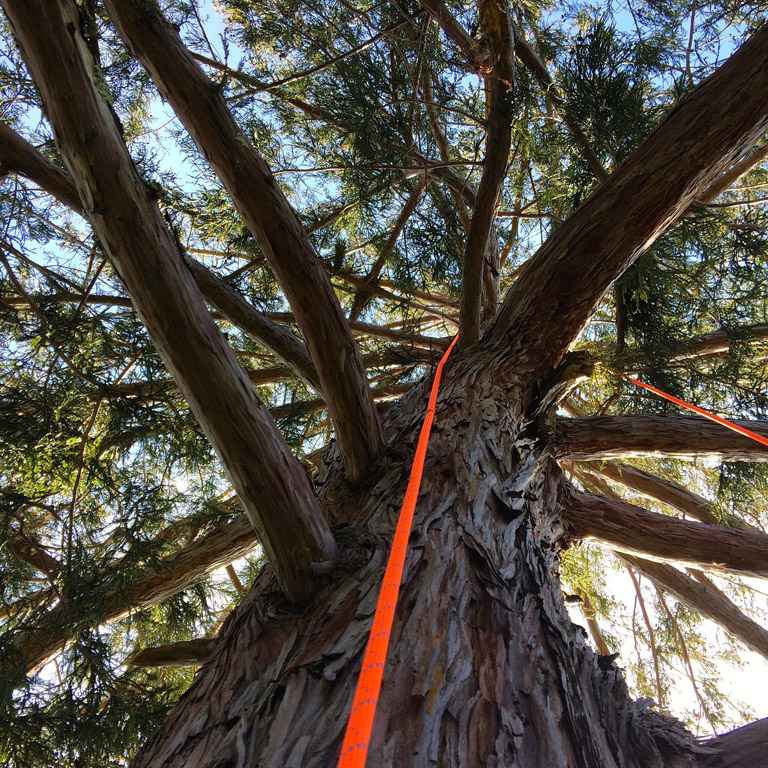 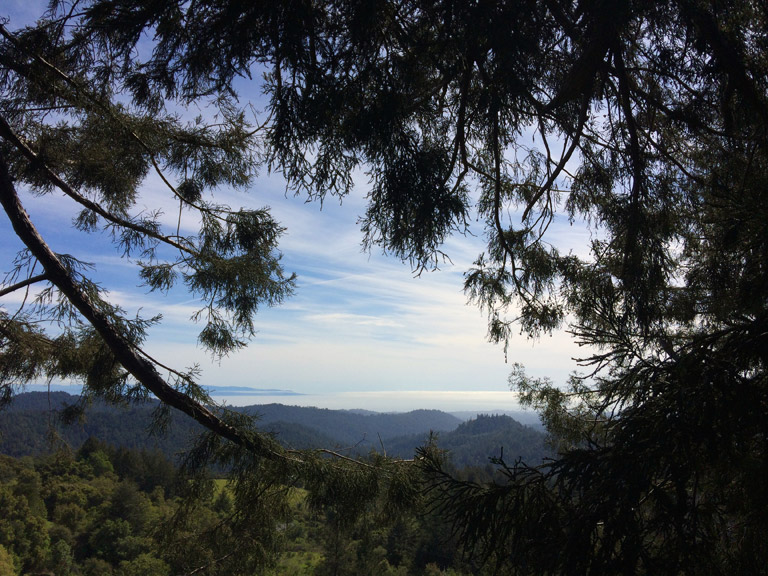 Most people have some memory of climbing trees as kids, often with an accompanying memory of a broken arm or wrist. No such danger here. TCP runs a tight ship and has a perfect safety record. My industrial climbing harness is outfitted with multiple built-in safety mechanisms and the group runs through a pre-climb training with various tests to ensure each climber is confident and understands how the gear works in any situation, including an unexpected fall.

The climbing method we’re employing today is called jugging, which is defined as climbing into the tree using ascenders. Jugging is effectively a sit-stand method of climbing—it essentially turns you into a human inchworm. It’s not the fastest technique in the world, but it is very safe and the pace allows you to appreciate every inch of the tree, and every micro and macro view ascending a 200-foot giant provides.

Most people know that redwoods are the world’s tallest trees. What most people may not know, however, is what is required of trees that get this tall. To surpass 150 feet is no small feat, and very few people get the opportunity to see how it is done, as it requires a view from the top. 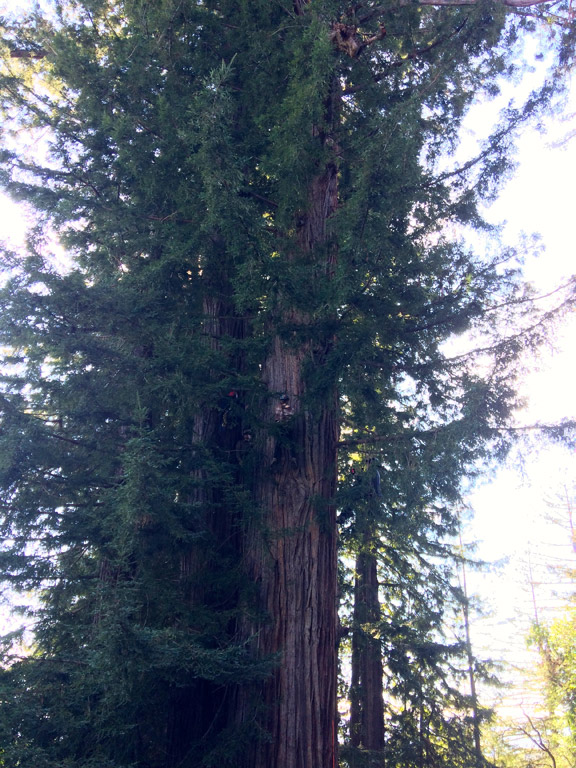 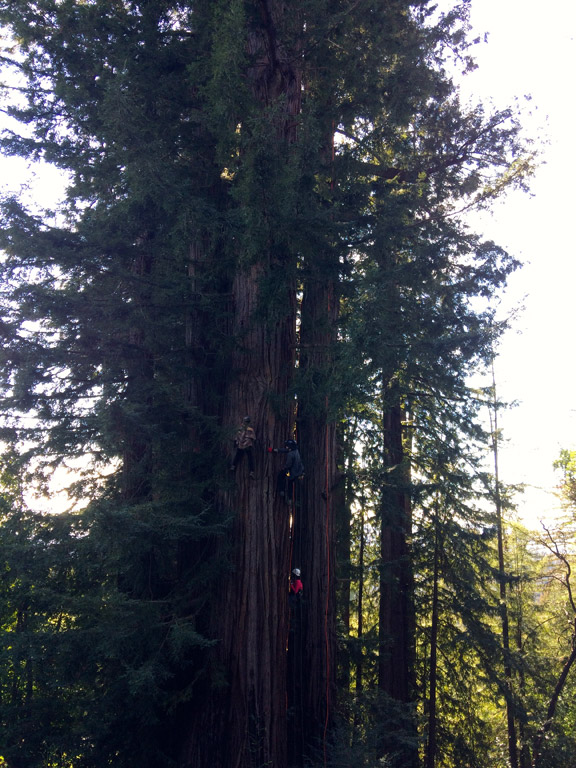 Redwoods are known to self-correct and re-balance to maintain structural and systemic equilibrium. Trees will drop healthy branches in advance of resource shortfall, like a drought. They will also make adjustments in the event of damage from storms, falling trees or other maladies: branches will fuse and re-fuse from old breaks, change directional growth—sometimes even growing back toward the trunk instead of away, or grow clones on top of branches to load-balance. The clones are at once fascinating and disconcerting, appearing as transplanted Christmas trees haphazardly placed a hundred feet up. Looking down from above, you can witness the history of time and the beautiful mess a tree makes simply to survive.

Back down on the ground, smaller trees hint at a much older story. Around the remnant stump and/or root crown of an old parent tree, a circle of new growth often appears, called a fairy ring. These young sprouts are often stimulated from dormancy when the parent tree’s system becomes damaged or starts to die. The tree network is adept at self-sustaining and replenishing, and with great urgency. Sprout trees in such rings have been documented to grow to over 7 feet in a single season! 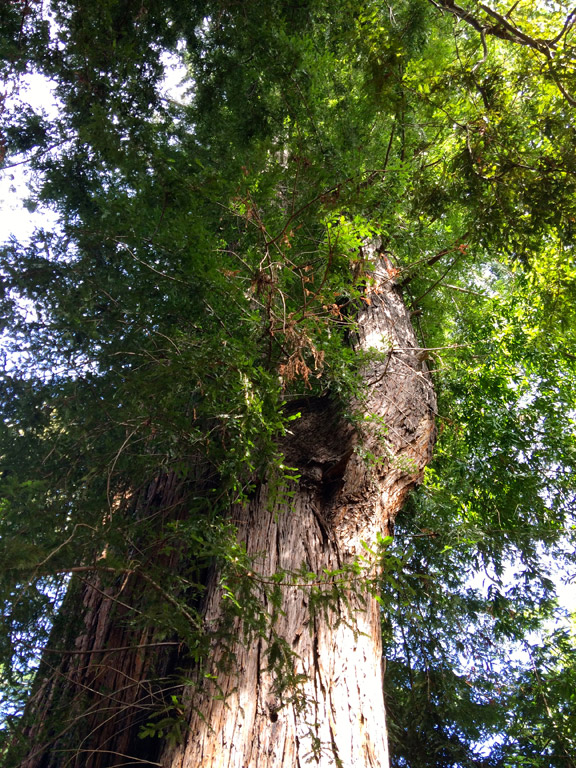 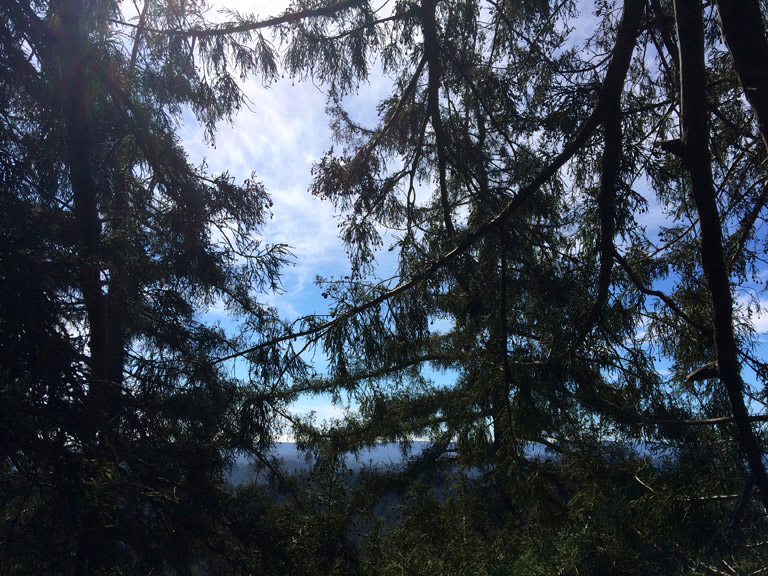 The prolonged period of drought in California has taken a massive toll on the state’s tree population, the effects of which may take years to be fully felt. Redwoods are a resilient species, but not without their own frailty. Climbing at different sites across the state over the past few years, Tim has noticed die back happening in the upper crown of some trees. More recently, he has observed leaf compaction—essentially the leaves are growing much more tightly than before, in the upper parts of the trees he climbs. This could be the trees’ own form of moisture conservation; not only has California seen a sustained decline in precipitation, but also the state’s infamous summer fog has become less abundant in recent years, and serves as a key source of moisture capture for redwoods.

Beyond the world of these redwoods, Tim has more leafy horizons to explore. He is pursuing the development of climbing tours in Costa Rica, India, Peru and Venezuela as well as planning a climbing/sailing trip combo out of Puerto Rico.

As for me, I survived my first foray up into a redwood, and found it much more relaxing and meditative than the childhood memories of summer camp in the redwoods just 10 miles north of this arboreal site. There is something undeniable about being up in a tree, particularly at that great height, seeing the land and time itself, from a completely different perspective. It is a perspective we should all be lucky to experience. 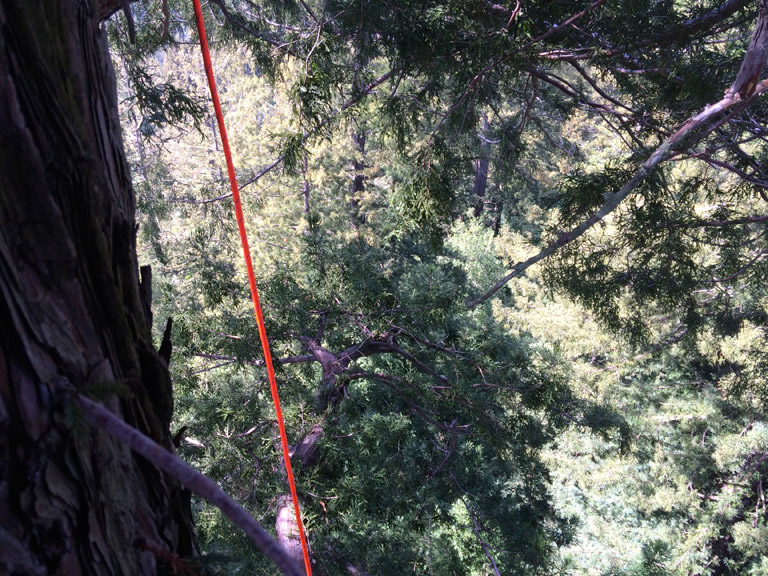 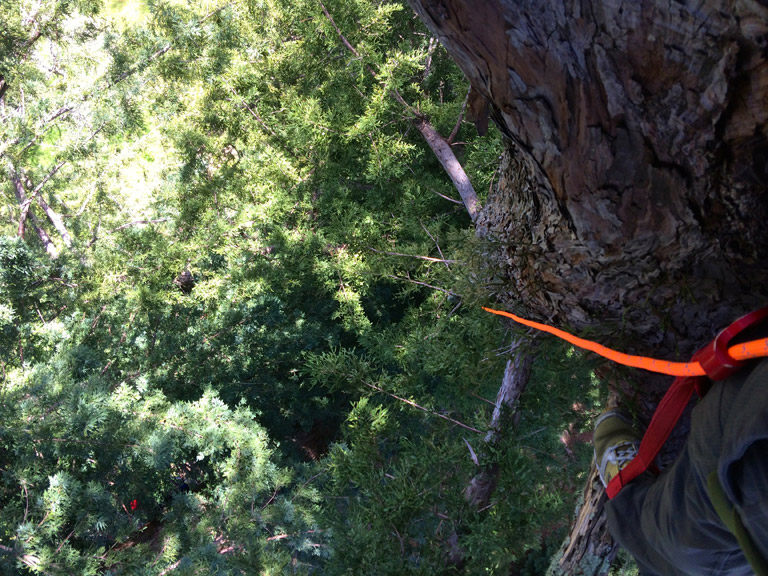 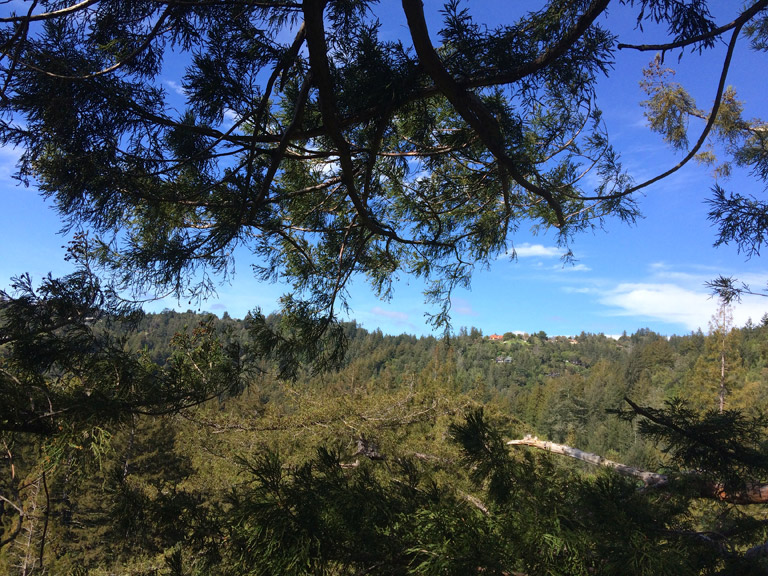 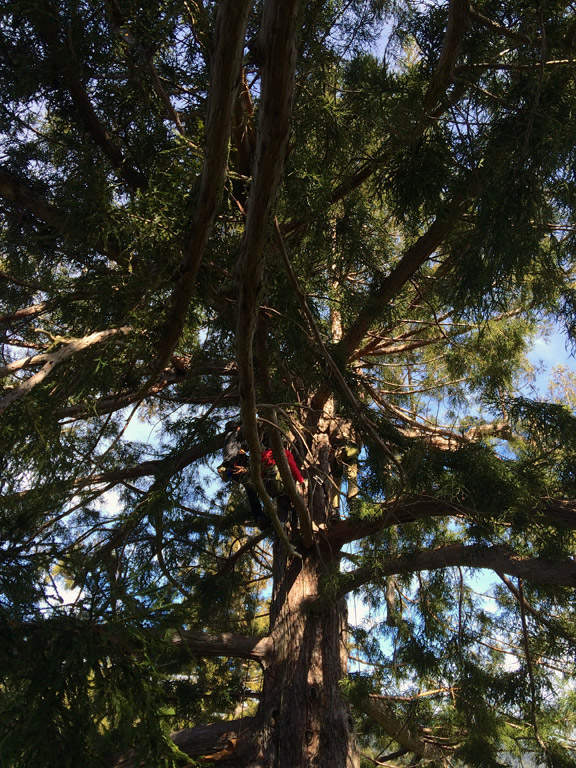 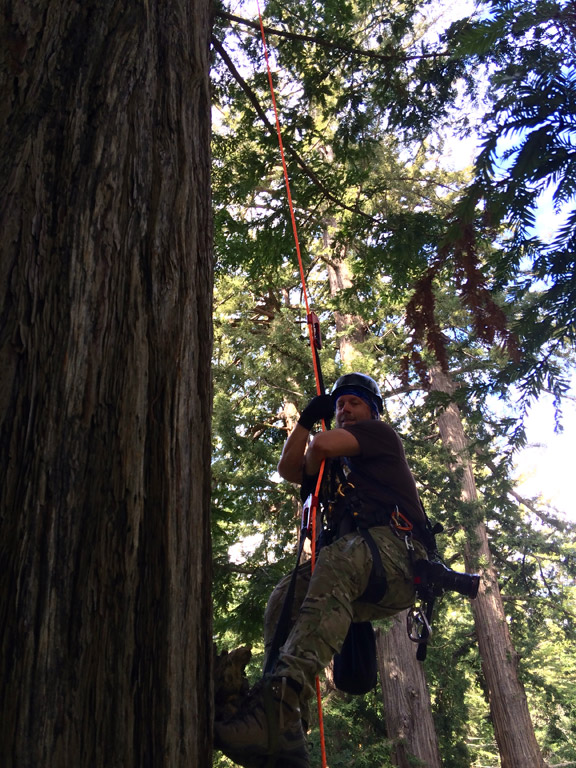 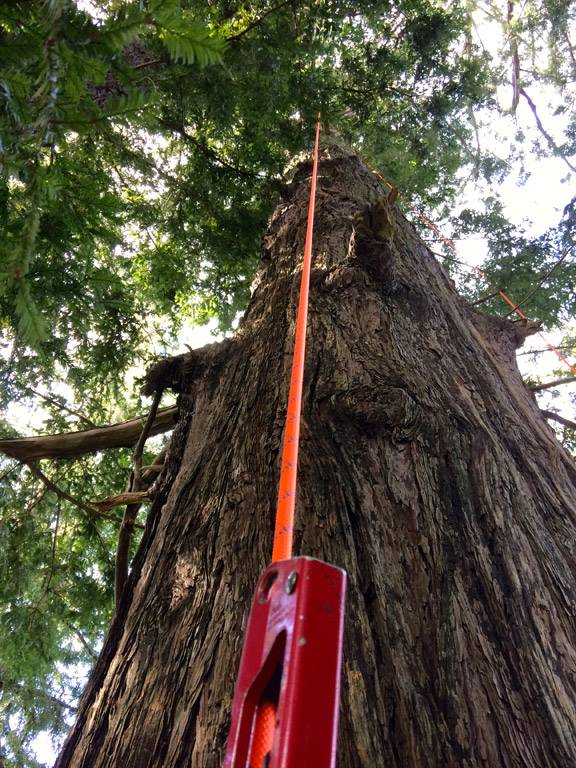 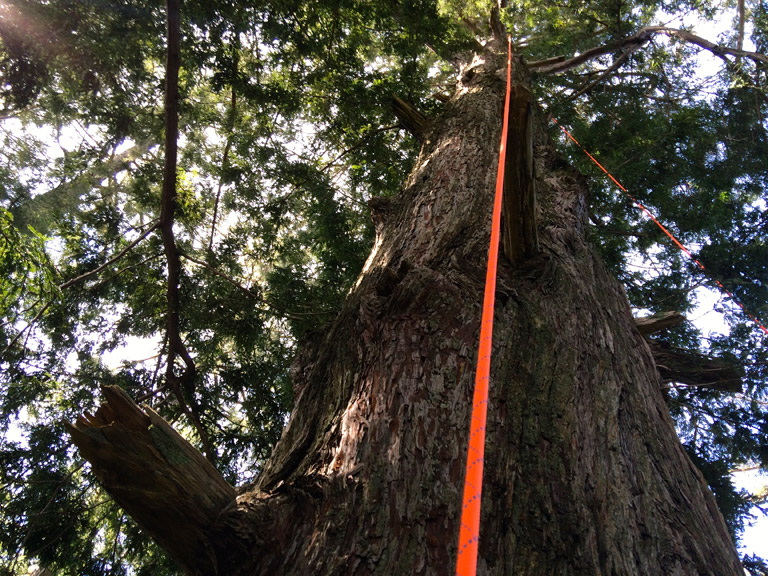 For further reading on redwoods, check out Ricard Preston’s The Wild Trees: A Story of Passion and Daring.