The climate zones boreal forests evolved in are moving north, and trees can’t keep up.

Key species in North America’s boreal forests, like black spruce, are disappearing from areas where they once thrived. According to Dennis Murray, a professor of ecology at Trent University in Ontario, the impacts of this tree loss are being felt across the entire ecosystem.

“You lose spruce and you lose everything that lives in spruce and that is basically everything in the boreal forest,” Murray recently told Yale 360. “We’re seeing the same phenomena that we’ve seen with moose with lynx and snowshoe hares. And caribou are going belly up very, very fast. Their ranges are receding northward rapidly.”

To be sure, the boreal, also known as taiga, is a sprawling and complex ecosystem, and while it may be retreating in some places, it is thriving, or at least surviving, in others. Still, the overall trend is so alarming that scientists are making increasingly dire projections about the boreal’s future as global temperatures continue to rise.

A team of forest experts from the Austria-based International Institute for Applied Systems Analysis (IIASA), Natural Resources Canada and the University of Helsinki in Finland published an article in August in the journal Science that found most boreal forests have so far proven capable of coping with current disturbances, but they face a variety of unprecedented threats to their health due to climate change.

“Boreal forests have the potential to hit a tipping point this century,” IIASA researcher Anatoly Shvidenko, one of the authors of the Science article, said in a statement. “It is urgent that we place more focus on climate mitigation and adaptation with respect to these forests, and also take a more integrated and balanced view of forests around the world.”

Die-offs of key species are not the only impacts global warming will have on the world’s boreal forests, which comprise 44 percent of Earth’s remaining intact forest landscapes. (For comparison’s sake, that’s just about the same amount as Earth’s tropical and sub-tropical forests.)

Currently, about two-thirds of the area covered by boreal forest is under some type of management, mostly for wood production, according to the Science article. There are numerous protected areas in the boreal, too, but a recent study suggests that protected areas fail to actually protect forests at an alarming rate.

We have options if we want to reduce the threats to boreal forests, Shvidenko and his co-authors write, “but economic incentives and a greater focus on the boreal biome in international fora are needed to support further adaptation and mitigation actions.”

Boreal forests comprise nearly one-third of all forested land on the planet. They stretch across the northernmost regions of Alaska, Canada, Russia and Scandinavia. Like all of the world’s forests, they play a vital role in regulating the global climate by sequestering massive amounts of carbon dioxide. They also provide habitat to an abundance of plants and animal life and represent not just homes but also livelihoods to Indigenous and forest-dependent communities.

Industrial development is increasing in the boreal, from logging for lumber and biofuel production to extraction of the Alberta tarsands. Though the latter is slowing down considerably as oil prices remain at historic lows, Canada’s boreal forests have been found to have some of the highest rates of deforestation of any intact forest landscapes in the world.

Global Forest Watch data shows that Saskatchewan in particular suffers from high rates of tree cover loss — some 19 percent of forest cover was lost in the area shown in the map below between 2000 and 2013. 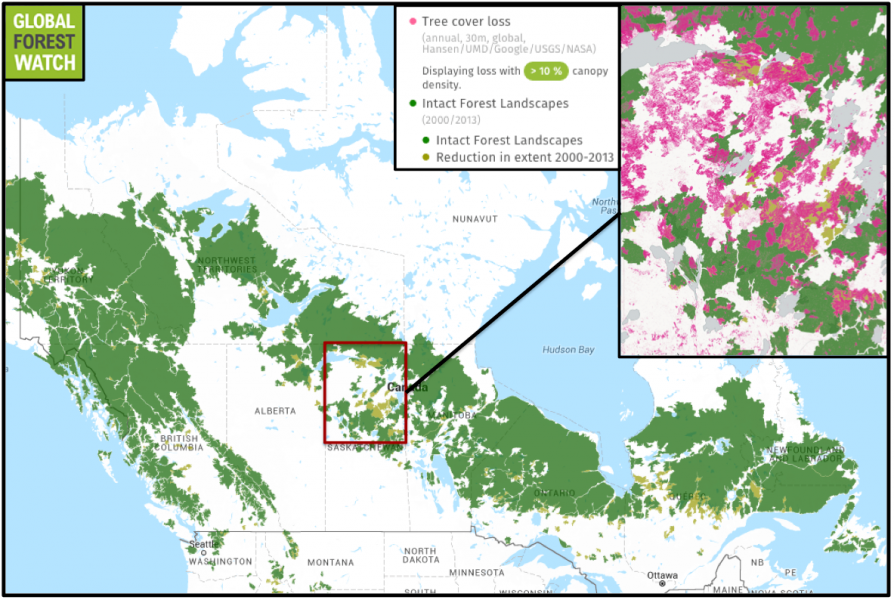 Boreal forests are also highly sensitive to climate change, which is bad news given that temperatures in the Arctic and boreal regions have been warming as much as 0.5°C per decade, according to Shvidenko and his co-authors. In its most pessimistic scenario for future warming, the UN’s Intergovernmental Panel on Climate Change projects that vast regions of the boreal could heat up as much as 6 to 11°C by 2100.

Forest fires have been found to be responsible for nearly 60 percent of forest loss in the boreal. Warmer, drier conditions due to climate change may have already caused the extent of wildfires to increase in the boreal, Shvidenko and his team of researchers found. It is also probably exacerbating the impact from outbreaks of dangerous insects, they said.

The contamination and pollution of the air, soil and water that comes with industrial development will reinforce the negative impacts of climate change, the researchers write. Taken together, all of these factors mean that huge areas of boreal forest will be degraded or even forced to convert to grass or shrubland in coming decades.

But it is the thawing of the permafrost lying beneath vast tracts of the boreal that could lead to the most dire long-term effects on the health of the biome, as it could change the hydrological system at the continental scale, permanently altering local weather patterns that the boreal has adapted to, and cause the release of huge amounts of greenhouse gases.

The permafrost in the boreal is far more susceptible to thawing than in the Arctic because it’s closer to the freezing point, the authors note. And once melting begins, releasing more carbon dioxide and methane into the atmosphere, it will cause more warming, which in turn increases permafrost thawing — a potential runaway feedback loop that keeps climate scientists up at night.

Shvidenko and team stress the need for continuous monitoring and research to assess the health of boreal forests and improve the understanding of these types of feedback loops in order to decrease the risk of reaching any kind of catastrophic tipping point. If the world’s boreal forests switch from being a carbon sink to a carbon source, it might very well be Earth’s habitable climate that has reached a point of no return.

“These forests evolved under cold conditions, and we do not know enough about the impacts of warming on their resilience and buffering capacity,” Shvidenko said.