Recently, mongabay.com interviewed Crystal Davis, the director of Global Forest Watch (GFW), about strides the system has made since its launch in February 2014.

Davis, who has been with the World Resources Institute, the Washington, D.C.-based environmental group that runs GFW, for more than eight years, started by describing the system’s origin. “I was in a meeting four years ago with two young scientists working with the [Washington-D.C.-based think tank] Center for Global Development who had invented an algorithm that could automatically interpret satellite imagery to identify recent forest disturbances in Indonesia,” Davis said. “We knew they were on to something groundbreaking and we spent the next several years bringing together a wide array of partners who could help us deliver this innovative idea at a global scale.”

The GFW system ultimately draws from global high-resolution annual tree-cover loss data provided by the University of Maryland and Google and satellite imagery courtesy of NASA’s MODIS satellite program and NASA and the U.S. Geological Survey’s Landsat project. Additional data comes from a variety of sources, including the environmental groups Conservation International and Greenpeace, the UN Environment Programme (UNEP), the UN Food and Agriculture Organization (FAO), the Environmental Systems Research Institute (ESRI), and Imazon, an environmental research group focused on the Brazilian Amazon.

Monagaby.com has also developed a partnership with GFW to establish the Global Forest Reporting Network, which integrates GFW data with environmental reporting.

In addition to its tree-cover monitoring service, GFW has developed services for monitoring fires and commodity chains. Global Forest Watch Fires allows users to monitor and respond to forest and other fires in Southeast Asia with near real-time data. And Global Forest Watch Commodities provides data about the impact on forests of key commodities, such as palm oil, mining, logging, and wood fiber with the goal of enabling companies to respond to deforestation in their commodity supply chains.

According to Davis, more than half a million people have visited the GFW website since its launch, and they put the data to a variety of uses.

For instance Rincong, a civil society organization in Aceh, Indonesia, has been using GFW data to create a community-based management plan to preserve the Ulu Masen Forest. The group uses GFW data to define forest boundaries and determine land ownership in local communities. And it has assisted local authorities in establishing forest-monitoring protocols with GFW’s alert system.

The Cameroonian Ministry of Forestry and Wildlife uses GFW to help track the actions of logging companies. And the Indonesian government uses Global Forest Watch Fires to track forest and peat fires. The technology allows the government to receive fire alerts provided by NASA.

GFW also publishes its own analyses. At its first annual “State of Global Forests” event in April, it released an assessment of global tree cover loss data for 2013 showing a total loss of 18 million hectares (69,500 square miles), a 5 percent increase over the annual average for 2000 to 2012. The top five countries for tree cover loss between 2011 and 2013 were Russia, Canada, Brazil, the United States, and Indonesia.

“We are constantly striving to improve the GFW platform in response to feedback from our users — by integrating new sources of data, creating new tools and features, and enhancing the user interface,” Davis said.” We are also working towards realizing the next big breakthroughs in global forest monitoring.”

Davis outlined progress in getting governments and intergovernmental organizations to recognize the new GFW data. “UN agencies and governments around the world are already engaging with Global Forest Watch. The UN Environment Programme (UNEP) and the UN Food and Agriculture Organization (FAO) are core partners and collaborators of the GFW initiative, as are an increasing number of government agencies including those from Peru, the Democratic Republic of Congo, Indonesia, among many others,” Davis said. 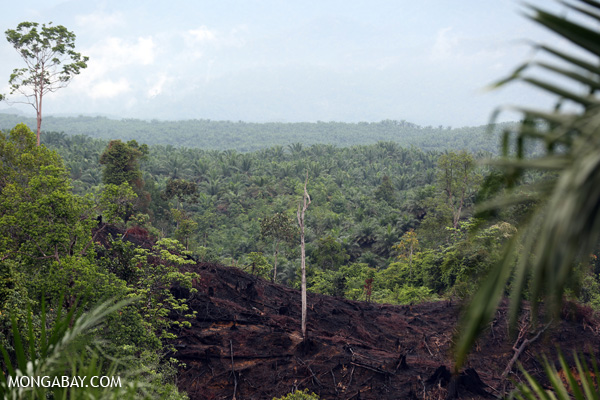 However, she said there have been challenges convincing some governments and intergovernmental organizations to actually make use of the GFW data in their reporting and to inform their policies and programs. Potential partners have raised a variety of concerns, including about how the data is generated, how accurate the data is for a particular country, whether the global methodologies can be adapted to a local level, and how GFW data compares with locally produced datasets.

“Any new source of data, especially data as powerful as what GFW provides, will undergo scrutiny as part of a process to build credibility. The methodologies behind the data on GFW have been published in peer-reviewed scientific journals, including Science. But methods and results also need to be explained in ways that non-scientists can understand,” she said.

Davis expressed optimism that GFW will overcome the challenges associated with introducing a new technology and data source to the public. “With a network of over 65 partners contributing new data, technology, and expertise to GFW, we are just getting started,” she said.

Disclosure: World Resources Institute provides funding to Mongabay for the Global Forest Reporting Network project, but has no editorial influence or control over the content that is produced under the partnership.