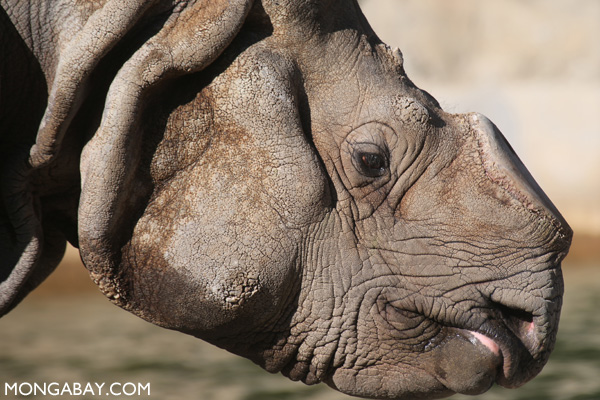 Indian rhino with horn removed to prevent poaching. Photo by: Rhett A. Butler.

A new survey in Nepal counted 645 one-horned rhinos (Rhinoceros unicornis), up from 375 animals ten years ago and 534 animals in 2011. This represent a rise of 72 percent over the last ten years, an impressive feat given that the world’s rhinos are facing a savage poaching crisis.

“At a time when the world is facing difficulties to protect and conserve the wildlife including rhinos, Nepal has seen an extraordinary improvement in wildlife conservation,” Diwakar Chapagain, the Deputy Director-Wildlife Trade Monitoring with WWF Nepal, told the Guardian.

But Nepal has proven unique during the poaching crisis: the country has gone three years without losing a single rhino to poachers.

“It is definitely a rare successful conservation story in the world, where park officials and the Nepalese army have managed to succeed in anti-poaching activities,” Chapagain added.

One-horned rhinos are currently listed as Vulnerable by the IUCN Red List, but this still makes them the least threatened of Asia’s three rhino species. The species population is also rising. Last year, the Indian state of Assam announced it had 2,544 one-horned rhinos, a population boost of 27 percent in eight years.