Imitation can be obnoxious. For those with siblings, imitating your brother’s or sister’s every word was a surefire way to steadily drive them toward insanity. Annoying it may be, imitation is also special; it’s a behavior long regarded to be uniquely human. The skill of imitation is a little less exclusive now, as reptiles join the ranks of creatures capable of the social feat. Researchers from the United Kingdom and Austria recently demonstrated that one lizard, the bearded dragon (Pogona vitticeps), can learn through imitation.

“Imitation is something that has for a long time been considered to be unique to humans and, potentially, other primates,” said lead researcher Anna Wilkinson, who studies cognitive science at the University of Lincoln, UK. “Finding evidence of this ability in a reptile is important as it not only has implications in terms of our understanding of the evolution of cognition,” said Wilkinson, “it also has implications in terms of animal welfare.” The study was published in the journal Animal Cognition. 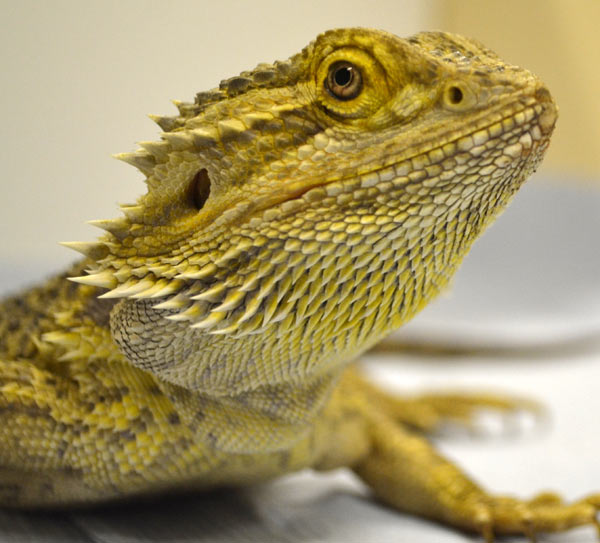 Don’t let their expressionless faces fool you; bearded dragons may be capable of learning through imitation. Photo credit: Samantha Penrice

The researchers began their experiment by training a lizard to open a sliding door in one direction. Once that lizard mastered the task, the researchers showed a recording of its performance to other lizards that had never seen the door or received any training. When shown the door for the first time, each of those lizards slid it open to claim a reward. When the researchers flipped the video footage so the door opened in the other direction, the lizards slid the door the other way. It didn’t matter whether the demonstrator slid left or right; the lizards opened the door in the direction they had seen it move in the footage. Lizards that did not see the footage could not open the door.

“The greatest challenge was training the demonstrator to open the door in the first place,” Wilkinson said. “This took much longer than we expected and shows that it is a difficult task for the lizards.” The task’s difficulty illustrates why imitation is such a valuable skill– it saves time.

“Social learning is considered a short cut to success,” Wilkinson said, “as it is much quicker than trial and error learning.” Imitation allows one organism to convey information to another in a fraction of the time it takes to learn it in the first place. In Wilkinson’s experiment, the demonstrator lizard spent hours learning how to open a door while the experimental lizards figured it out in minutes. 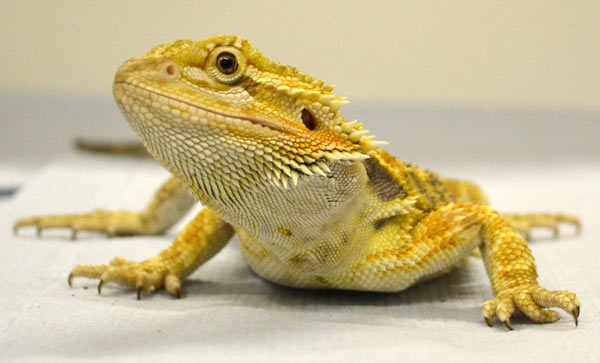 Bearded dragons can darken their skin and inflate their elastic throats to ward off predators and rivals. Photo credit: Samantha Penrice

Determining whether or not an animal is truly imitating, or even pinning the concept of imitation to a hard and fast definition, can be difficult. The researchers in this study regarded imitation as one organism mimicking another’s behavior to produce the same outcome. But they were careful to draw the distinction between emulation, when the behavior is purely outcome or goal-oriented, and imitation, which entails the imitator actually mimicking another creature’s behavior without aspiring to achieve a goal. Because the researchers never showed the demonstrator lizard being rewarded, they reasoned that the experimental lizards were focusing solely on the door-opening behavior, not the goal of retrieving food, and were thus truly imitating.

Wilkinson is hopeful that the study will prompt changes in how reptiles are cared for in captivity. Bearded dragons are particularly popular in the pet trade because of their gentle demeanor, a characteristic that lands many of the lizards in dismal terrariums.

“Reptiles are frequently considered to be stoic and unresponsive,” said Wilkinson, “they are thus often kept in inappropriate and barren environments. In order to maintain animal welfare in captivity it is vital that we understand their mental capacities.”

Pollinators puzzle to find flowers amidst natural and human fumes

(12/09/2014) While unpleasant car exhaust makes us wrinkle our noses, such human-made fumes may pose serious problems to insects searching for nectar. Researchers recently revealed that background odors make finding flowers difficult for pollinators. The study, published in Science, measured how hawk moths (Manduca sexta) pick out the sacred datura flower scent (Datura wrightii) amidst all the other smells that waft through the environment.

(12/08/2014) It all went to hell when Jane Goodall started handing out bananas. Within a few years, the previously peaceful chimpanzees she was studying split into two warring tribes. Gangs of males from the larger faction systematically slaughtered their former tribemates. All over the bananas. Or so the argument goes.

(12/03/2014) Baby sea turtles vanish after they scamper into the ocean. Years later, juvenile turtles may pop up thousands of kilometers away, but often scientists don’t see them again until they return to their birthplaces to nest on the beach. Now, using tiny tracking tags weighing no more than two watermelon seeds, a team has followed newborn loggerhead turtles during their first critical hours at sea, revealing how they evade predators and hitch rides on the ocean’s currents.