The Indonesian government is pressing forward with plans to clear 14 million hectares of forest between 2010 and 2020 despite a commitment to curb greenhouse gas emissions, reports The Jakarta Post.

In an interview Tuesday, Hadi Daryanto, secretary-general of Indonesia’s Ministry of Forestry, said the government aims to convert 14 million hectares of “degraded” forest for plantations, energy production, and infrastructure. Forest will be carefully selected for conversion, according to Hadi.

“Deforestation is inevitable [for development], but we will allocate the land for better use,” Hadi told The Jakarta Post. “We will provide the forested land information on our website and we will invite people to monitor the process by using the satellite imagery to supervise the land.”

From the published excerpts, it wasn’t clear what criteria the government would use for choosing what areas to grant for conversion or how much forest has been sanctioned for clearing since 2010. 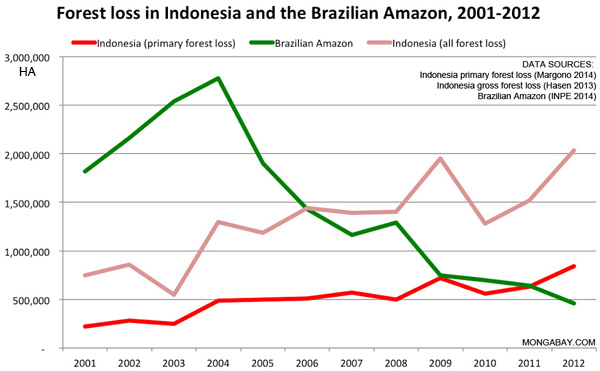 Forest loss in Indonesia and the Brazilian Amazon between. Indonesia lost 15.79 million hectares of forest between 2000 and the end of 2012, according to studies by researchers at the University of Maryland. Of that area, 38 percent or 6.02 million hectares consisted of natural or “primary” forest.

Indonesia recently surpassed Brazil as the world’s top deforesting tropical nation, according to a Nature Climate Change study published in June by Belinda Margono and colleagues of the University of Maryland and other institutions. That research indicated that deforestation has been rising across the archipelago since 2000. Most deforestation in recent years in Indonesia has been driven by conversion of forests for oil palm and industrial timber plantations.

The Nature Climate Change data runs through late 2012, accounting for nearly two years of Indonesia’s 2011 moratorium on new permits in 14 million hectares of primary forests and peatlands. It suggests that the moratorium’s limited scope — it doesn’t apply to concessions granted prior to May 2011 and grants large exemptions for mining and energy crops — may be limiting its effectiveness in reducing emissions from land use change. 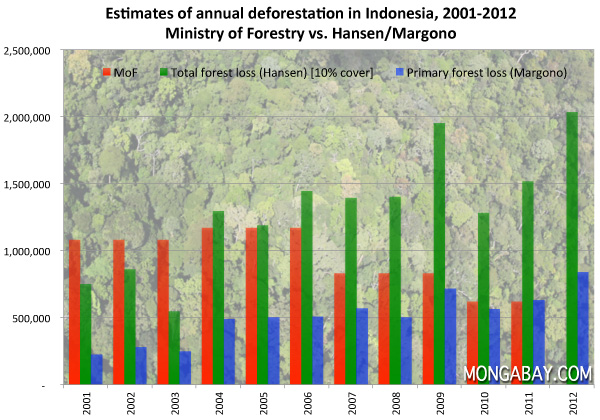 Vast areas of Indonesia’s forests have been degraded by damaging logging practices and fire. According to Margono’s research, only about 92 million of Indonesia’s 165 million hectares of forest can be classified as unlogged. But these degraded areas are nonetheless highly variable in terms of their biodiversity and carbon value. Some retain a wealth of species and store high amounts of carbon, while others are biologically impoverished and little resemble natural forests.