Pope Francis: ‘this is our sin: we exploit the earth’

In Southern Italy over the weekend, Pope Francis reiterated his view that environmental destruction constituted a sin. Visiting the largely agricultural region of Molise, the pope responded to an address by a local farmer attending university.

“I fully agree what has been said about ‘safeguarding’ the earth, to bear fruit without ‘exploitation’. This is one of the greatest challenges of our time: conversion to a development that respects Creation,” he said off-the-cuff. “In [South America], my homeland, I see many forests, which have been stripped … that becomes land that cannot be cultivated, that cannot give life.”

The pope added, “This is our sin: we exploit the earth and do not let it give us what it harbors within, with the help of our cultivation.”

South America has long been at the heart of global deforestation, especially in the Brazilian Amazon which has lost nearly 20 percent of its forest cover since the 1970s. In the last decade deforestation has significantly slowed in Brazil, although not stopped. Only recently has Brazil’s deforestation rate been eclipsed by Indonesia, which is seeing forests fall to oil palm plantations, logging, and pulp and paper.

The pope also dubbed the relationship between the farmer and the land “a dialogue, a fruitful dialogue, a creative dialogue.” Aerial view of cattle grazing in newly-deforested Amazon rainforest. The majority of deforestation in the Amazon is linked to cattle ranching. Photo by: Rhett A. Butler.

He went on, “It is this dialogue between man and his land that makes it flourish, fruitful for all of us. This is important. A good educational program does not offer easy solutions, but it helps to have a more open and creative vision to better exploit the territories resources.”

This is hardly Pope Francis’ first comments on the importance of environmental stewardship and the “sin” of environmental destruction. In his first homily after being elected pope in 2013, Francis I spoke of the need for Christians to act as “protectors.”

“It means protecting all creation, the beauty of the created world, as the Book of Genesis tells us and as Saint Francis of Assisi showed us,” the pope said. “It means respecting each of God’s creatures and respecting the environment in which we live. It means protecting people, showing loving concern for each and every person, especially children, the elderly, those in need, who are often the last we think about.”

In May of this year, the pope also spoke eloquently about the need to act as “Custodians of Creation.”

“When we exploit Creation we destroy the sign of God’s love for us, in destroying Creation we are saying to God: ‘I don’t like it!. This is not good!’ ‘So what do you like?’ ‘I like myself!’–Here, this is sin! Do you see?” the pope told an audience at the Vatican, adding, “Creation is not a property, which we can rule over at will; or, even less, is the property of only a few: Creation is a gift, it is a wonderful gift that God has given us.”

The Catholic Church, which has a global congregation of 1.2 billion, has increasingly become outspoken about environmental issues. Pope Francis’s predecessor, Pope Benedict XVI, often discussed the environmental crisis, including global warming. He dubbed the fight against global warming a “moral obligation.” 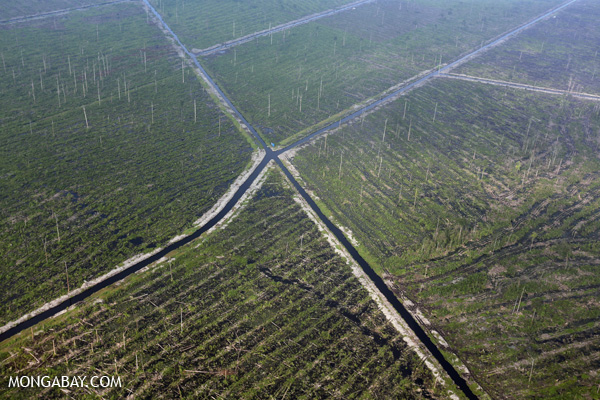 Indonesia now has the world’s highest forest loss. Here, peat forest has been cleared in Sumatra. Peat forest is hugely biodiverse and contains significant stores of carbon. Photo by: Rhett A. Butler.

Pope Francis: ‘if we destroy Creation, Creation will destroy us!’

(05/28/2014) Pope Francis I, who named himself after the nature-loving Saint from Assisi, spoke about the need to safeguard creation during an audience at the Vatican last week.

(03/20/2013) In his first homily as the new pope, Francis I spoke of the need to act as protectors both for the environment as well as for the poor and weak. With his focus on the environment the new pope echoes both his namesake, Saint Francis of Assisi, as well as the previous pope, Benedict XVI who championed environmental causes from climate change to biodiversity as crucial to the Catholic religion.