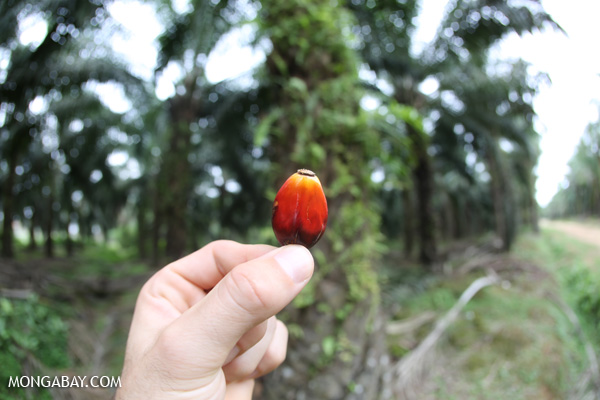 An Indonesian Stock Exchange-listed company whose commissioner is a member of The Nature Conservancy-Indonesia’s board has been clearing dense rainforest in New Guinea, finds a new report from Greenomics-Indonesia.

The report, titled ‘Busy years’ ahead until 2017: Spending US 12 million on clearing Papua’s intact forest landscapes”, is based on analysis of data from Global Forest Watch, NASA satellites, Indonesia’s Ministry of Forestry, and company documents. It finds that two recently acquired subsidiaries of PT Austindo Nusantara Jaya Tbk (ANJT) — PT Permata Putera Mandiri (PPM) and PT Putera Manunggal Perkasa (PMP) — have cleared forest in South Sorong and Maybrat Regencies, located in West Papua Province, the Indonesia-controlled part of the island of New Guinea. While the clearing was conducted legally, it appears to have taken place in forests that would be off-limits for conversion under new voluntary “zero deforestation” commitments established by companies that buy from ANJT. ANJT acquired PPM and PMP in January 2013. Both companies had permits to convert lands that include areas classified by the World Resources Institute as “intact forest landscapes.” According to Greenomics, roughly two-thirds of the 57,571 hectares of concessions held by the two companies consist of such forests. The companies then secured $12 million in loans to finance plantation development.

While authorities in Indonesia regularly grant licenses to clear forests for oil palm plantations, ANJT’s customers — including Wilmar, which recently made a “zero deforestation commitment”, and several companies associated with the “Sustainable Palm Oil Manifesto” — put it in a more sensitive position, which is made more delicate by ANTJ commissioner George Tahija’s association with TNC-Indonesia, an arm of international conservation giant TNC.

“[On] one hand George Tahija is a member of the TNC Indonesia Chapter Advisory Board and the TNC Asia Pacific Council, while on the other hand he also serves as a commissioner of a company
whose 2013 annual report contains a photograph showing land clearance work on intact forest landscapes in Papua for the purpose of developing new palm oil plantations,” states the report. “TNC has ‘special access’ to George Tahija and accordingly it can play a role in communicating the practices of ANJT’s two subsidiaries in continuing to clear intact forest landscapes.”

In response to a query from Mongabay.com, TNC called Tahija “a valued member” of its Indonesia Program’s Board of Advisors and its Asia Pacific Council.

“In these capacities Mr. Tahija has been an effective conservation ambassador and advisor,” TNC said.

“The results of the work will include increased capacity of district governments, tools and approaches for improved corporate and community practices, provincial level socio-economic and environmental analysis and policy dialogue to inform sustainable oil palm development, and policy recommendations on jurisdictional program development and implementation,” TNC stated. These Landsat 8 satellite images taken between 29 November 2013 and 22 April 2014 show expanded clearing within the PMP palm concession. Courtesy of Greenomics. NASA Landsat images from 1 February 2014 to 24 May 2014 showing clearing within the PPM concession. Courtesy of Greenomics.

ANJT is a member of the Roundtable on Sustainable Palm Oil (RSPO), an eco-certification initiative that requires companies to abide by certain social and environmental criteria when opening up new lands for plantations. In this case, the Greenomics report shows that ANJT has failed to abide by those rules, a point admitted by the company in a response emailed to Mongabay.com.

“We however admit that as an RSPO member the New Planting requirements were not adhered to and thus an infringement has occurred,” said Sucipto Maridjan, the company’s External Affairs Director. “In view of this, all activities have been suspended on site and we are now entering into the NPP process.”

“PMP will also undertake a voluntary Land Use Change Analysis to confirm any wrong doing and if necessary progress into a Remediation and Compensation exercise as required by RSPO. Further to this, we will also be reassessing the site for HCV reconfirmation and High Carbon Stock (HCS) presence.”

ANJT, which noted that its activities are fully compliant with Indonesian law and have undergone a high conservation value (HCV) assessment by RSPO-approved assessors, however wasn’t ready to say whether it would meet the emerging zero deforestation commitments from Wilmar and the Sustainable Palm Oil Manifesto companies.

“ANJ is fully committed to achieving the requirements of the RSPO P&C through continuous improvement. Although we are aware of the existence of Wilmar’s No Deforestation, No Peat, No Exploitation Policy and the Sustainable Palm Oil Manifesto Standard we are still reviewing these ancillary requirements and are of the opinion that most of these requirements are already embedded within the RSPO P&C. We reiterate that RSPO certification will be our main focus at this point in time and leaving all options open.”

Indonesian New Guinea has the largest extent of natural forest cover and the lowest deforestation rate of any major land mass in the country. Nonetheless environmentalists fear that Papua and West Papua could become the next frontier for oil palm development in Indonesia.