by Satria Eka Hadinaryanto on 5 June 2014

Please note: the article originally listed “Sumatra” instead of “Sulawesi”. Bangka Island indeed lies off Sumatra, but this case relates to a smaller island named Pulau Bangka in northern Sulawesi. Both islands have issues with mining.

Conflict from mining activities on Bangka Island off North Sulawesi, entered a new chapter after a local resort manager voiced concern over an incident involving its clients and mining staff last Saturday.

Four foreign tourists, from the U.S., the Netherlands, Sweden and Germany, were diving off the coast of the island when officers and workers of PT Mikgro Metal Perdana (MMP) allegedly forced them to the surface. In addition, the officers and workers have confiscated all of their diving certifications.

“They went diving from 9 a.m. [but] 30 minutes later, some men — allegedly workers of MMP — started to throw rocks [at where they were diving]. Their boat was forced ashore and they were interrogated at the Ehe village head (hukum tua) office but he was not present so they were brought to Village Representative Body,” Angelique Batuna, owner of Murex Dive Resort, told Mongabay-Indonesia. 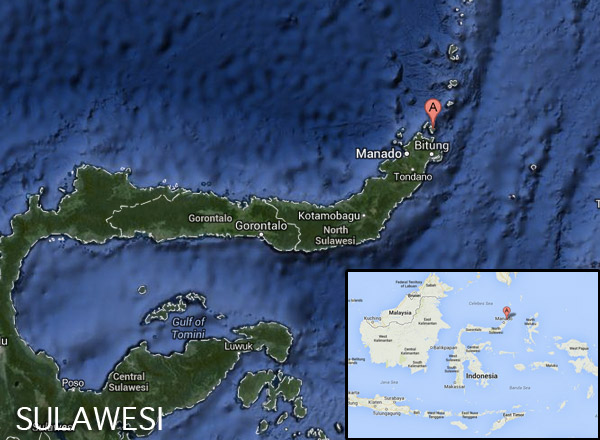 Bangka Island is located off the eastern tip of North Sulawesi. Image courtesy of Google Earth. Click to enlarge.

Batuna continued, saying that at the meeting, the mining workers assumed the divers had no permit to dive in the location claimed to belong to MMP.
“Since when do we have to ask for a permit for diving in that area? It [the area] is called Sipi and [it] has been a diving spot for many years,” Batuna said. “No one has ever [been] prohibited [to dive in the area].”

She added that the divers photographed coral damage, polluted water and sedimentation in the areas, all of which were likely caused by mining activities.
Batuna said the divers felt intimidated by the incident and planned to report it to their embassies.

Femmy Pangkerego, head of North Minahasa Cultural and Tourism office, regretted the incident and said there were no diving restrictions concerning Bangka Island.

“If there were any coral damages then I will report it to my superior,” Pangkerego said. “It’s a shame if our marine ecosystem is being destroyed because it can decrease tourists’ visits [to Bangka Island].” 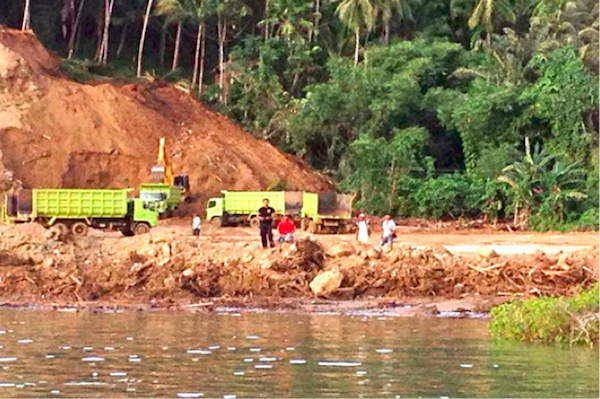 Heavy machinery operating on Bangka Island prompted protests from local villagers, who regard the activities as destroying their homes and livelihoods. Photo by Save Bangka Island.

Since 2010, Chinese-owned MMP has targeted the 4,800-hectare island for its mineral richness, particularly iron ore. Even without an environmental impact assessment and approval from the Indonesian Ministry of Forestry, local government granted mining rights of 2,000 hectares to the company in 2010.

Consequently, villagers protested that the activities would force them to relocate and will destroy the forest and ocean upon which they depend. Bangka Island has become a diving tourism destination due to its unique marine ecosystem. However, the mining permit is threatening this tourism industry, and would displace local villagers. If mining proceeds, at least 750 families currently living in Libas, Kahuku, Ehe and Lihunu villages will be forced to move to neighboring villages such as Sipi Kayu Bulan in East Likupang sub-district.

In 2013, the Sulawesi Court ordered the bupati (head of district) of North Minahasa to revoke the permit as it was in violation of several Indonesian laws relating to land rights, environmental protection and tourism. The decision was strongly upheld by the Supreme Court the same year. However, local government ignored the ruling and the company began mining operations.

“The permit has been revoked by the court [but] they [are still] damaging the sea and prohibiting people to dive,” Batuna said. “It will put a bad mark on North Sulawesi tourism, even Indonesia. They won’t allow people to dive there, saying that they already bought the sea.”

Currently, the company is building roads for mining and allegedly conducting initial exploration activities under heavy guard by the mobile brigade police.
However, on May 20, local villagers filed a criminal charge against MMP to the North Sulawesi police, stating that the company’s mining explorations had turned to production.

“According to the law, MMP has conducted illegal mining which violates criminal charges according to the 2009 Law on Mineral and Coal Mining in article 158,” states the report dated February 2014. 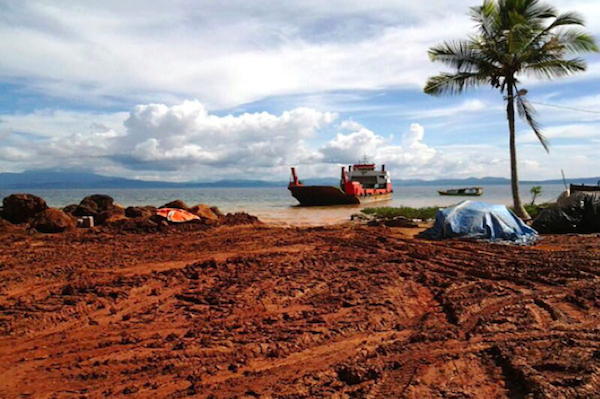 Development activities in the coastal area of Bangka Island where they have cut down mangroves and started discarding rocks into the sea. Photo by Save Bangka Island.

Jull Takaliuang, director of the Suara Nurani Minaesa Foundation, said that the development activities indicate MMP is planning on setting up a steel factory.

“If the government keeps on letting this happen, it will bring bad impacts for the people and environment,” Takaliunang said. “The Court had already revoked the permit but the company keeps on going. It is considered illegal but now they are doing [development].”

Furthermore, Takaliunang is worried that people will lose trust in the law and take it upon themselves to stop MMP through illegal actions.
“They might end up being criminalized so that mining can still continue,” he said.

However, Save Bangka Island Coalition, which is comprised of several civil societies, such as Walhi (Indonesian Forum for the Environment), Jatam (Mining Advocacy Network), Greenpeace, Kiara (People’s Coalition for Fisheries Justice), Tunas Hijau, Change.org, YLBHI (Indonesian Legal Aid Foundation), LMND (National Student League for Democracy) and KontraS, issued a joint statement on May 26 to support the decision by the Ministry of Environment to investigate possible environmental damages caused by the company.

Sudariyono, deputy minister for environmental compliance, said that his office had received the complaint letter from Bangka Island and would deploy officers to investigate the damages.

The situation on Bangka Island illustrates how state officials, who are supposed to uphold law, often instead turn a blind eye on illegal corporate activities, resulting in damage both to the environment and human communities. It also sullies Indonesia’s reputation as a protector of marine ecosystems, as was proudly announced by its selection as host for the World Coral Reef Conference, held May 14-17, in Manado, North Sulawesi.

There are also issues with mining on Sumatra’s Bangka Island. Environmentalists blame tin mining in Bangka for a range of problems, including ecological damage and dangerous worker conditions. Friends of the Earth Netherlands last week launched a campaign against Microsoft to pressure the tech giant to adopt safeguards to push miners in Bangka “to end irresponsible mining practices

(05/29/2014) Next week, the rainforests of Southeast Asia are going live. On June 2nd, 11 organizations in the region will be posting lives video, photos, and wildlife sightings over 24 hours on Facebook and Twitter (see #rainforestlive). Dubbed Rainforest: Live, the initiative hopes to raise awareness of quickly vanishing ecosystems and species.

(05/29/2014) Corporations will have to step up as better stewards of the environment if Southeast Asia’s haze crisis is to be addressed, said Singaporean officials during a meeting held last week to discuss regional sustainability efforts.