Logs being transported on a road was built by PT Sawindo Cemerlang. The photo was taken in the months after Wilmar’s announcement of its No Deforestation Policy. Courtesy of Greenomics.

The report, titled As a strategic shareholder, is this in line with Wilmar’s No Deforestation Policy?, looks at recent activities by PT Sawindo Cemerlang and PT Sawit Tiara Nusa, companies owned by the Kencana Agri Group Ltd. Wilmar holds a 20 percent stake in Kencana Agri, according to financial filings. 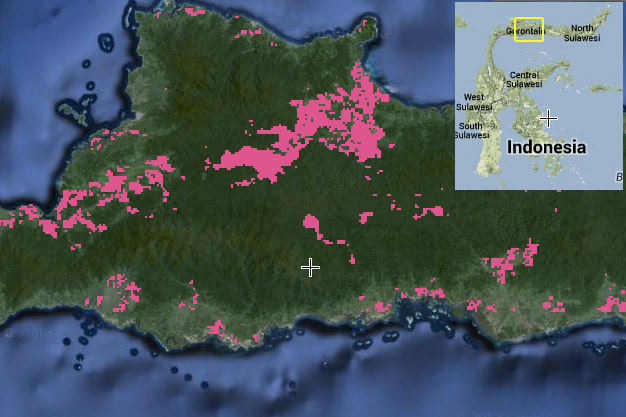 “Wilmar’s No Deforestation Policy states that it applies to ‘all Wilmar’s operations worldwide, including those of its subsidiaries, any refinery, mill or plantation that we own, manage, or invest in, regardless of stake’,” states the report. “Consequently, Wilmar urgently needs to explain what exactly is going on at these two palm oil concessions.”

“Has a HCS assessment ever been carried out on the two companies?,” asked Elfian Effendi, the Executive Director of Greenomics. 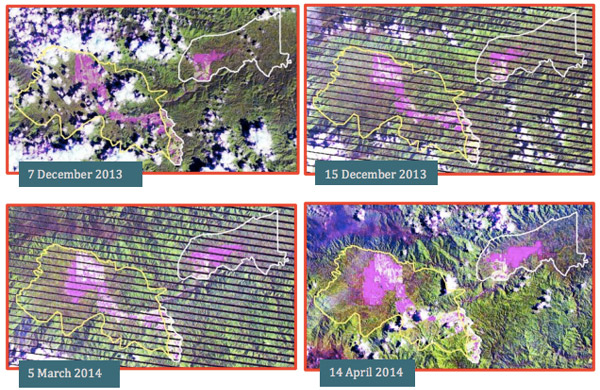 These Landsat satellite images show the clearance of HCS forests in the two palm oil concessions subsequent to 5 December 2013, the date on which Wilmar announced its No Deforestation Policy. It is clear that from 7 December 2013 until at least 14 April 2014, the two palm oil companies continued to clear HCS forests, as if Wilmar’s No Deforestation Policy was entirely irrelevant. Caption and image courtesy of Greenomics.

Greenomics added that the situation raises questions about how Wilmar is monitoring affiliates and whether it will continue to source palm oil from suppliers who accelerate forest clearing ahead of its deadline for ending deforestation.

“Wilmar needs to explain its plans for those of its associates and suppliers whose permits are new or relatively new and whose concessions are dominated by HCS forests,” said the group. “Wilmar needs to explain the trend of accelerated clearance of forested areas, especially HCS forests, by its associates and suppliers ahead of the “deforestation deadline” of 31 December 2015.”

In response to the report, Wilmar said it would investigate the matter.

“We are looking into the allegations seriously and we are currently engaging Kencana but will need more time to work out the next steps,” Wilmar told Mongabay.com via email. “We reiterate our commitment to our “No Deforestation, No Peat and No Exploitation’ policy.”

Wilmar is the world’s largest palm oil company, trading or producing nearly half the world’s palm oil. Under pressure from environmentalists and buyers for sourcing palm oil associated with deforestation and social conflict, Wilmar last year announced a far-reaching policy that set social and environmental safeguards across its global supply chains. The policy applies to commodities it produces and buys, while committing the company to work with stakeholders to reduce conflict.

Citation: Greenomics. As a strategic shareholder, is this in line with Wilmar’s No Deforestation Policy? June 2014.

Note: the original version of this story stated that Wilmar’s HCS definition is based on 35 tons of carbon per hectare threshold. In fact, Wilmar has adopted a “strata” approach to protecting forests, with forests 10 years old and above considered HCS. Thanks to Glenn H. for the correction.

(05/22/2014) The path to zero-deforestation appears to be paved with good intentions, but how successful are these companies in staying on that path? A controversial proposal to construct a refinery in the wildlife-rich Balikpapan Bay in Indonesian Borneo highlights the challenges faced by both palm oil companies and conservationists in the face of zero-deforestation commitments.