For the past decade and a half, Asia Pulp & Paper (APP) has been one of the most controversial paper producers on the planet. Environmentalists, human rights groups, and conservation scientists have blasted the Indonesian forestry giant for a long list of transgressions, ranging from illegal logging to destruction of tiger habitat to exacerbating conflict with forest-dependent people in the forests of Sumatra. Greenpeace, the Rainforest Action Network (RAN), WWF, the Rainforest Alliance, Friends of the Earth, and numerous local NGO’s have been among the many critics of APP. Their complaints have spurred dozens of major companies to drop APP directly or establish policies that exclude APP as a supplier. Via mongabay, I have reported extensively on these issues over the past several years.

Last February, APP established a forest conservation policy that commits it to protect rainforests and peatlands, avoid sourcing fiber produced via deforestation, reduce social conflict, and seek free, prior informed consent (FPIC) from communities when establishing new plantations. The policy, which went into effect February 1, 2013, applies to all the sprawling forestry giant’s operations and suppliers.

Understandably, the policy was met with considerable skepticism from civil society groups who have heard APP make seemingly virtuous pledges in the past, only to see it return to business-as-usual shortly thereafter. But now, almost a year into the new policy, there has been a noticeable shift in both APP’s tone and action on the ground. In a sharp departure from the past, APP has welcomed criticism from hostile NGO’s, set up a system for managing grievances, and even self-reported breaches of its deforestation moratorium. Meanwhile Greenpeace — once APP’s fiercest critic — has continued to keep its campaign against APP on hold as a good faith gesture.

But while there has been definite progress, there are still lingering concerns about APP, both in terms of whether it will continue to be a good corporate citizen moving forward and what it will do to rectify past problems. Some NGO’s continue to harbor serious doubts about APP’s long-term commitment, while others recognize the considerable institutional challenges APP faces as its tries to implement a zero deforestation policy in a country where laws aren’t always clear or enforced, competitors aren’t bound by equivalent conservation commitments, and current government policies incentivize forest clearing over preservation. Adding urgency to the situation is recent research indicating that deforestation in Indonesia is continuing at a rapid pace and increasingly industrialized, meaning that it is more important than ever to engage companies that drive forest conversion.

So in other words, APP’s forest conservation policy remains a hotly debated, yet critically important, issue. In that context, I’m pleased to announce that I will serve as the moderator for a forum taking place on the one year anniversary of APP’s forest conservation policy. The forum, which will be held February 5 in Jakarta, will involve a range of players in the debate, including APP; APP partners The Forest Trust and Ekologika; former APP critic Greepeace; and current APP critics WWF and RAN. The debate will be recorded and posted on the Internet for the world to see. 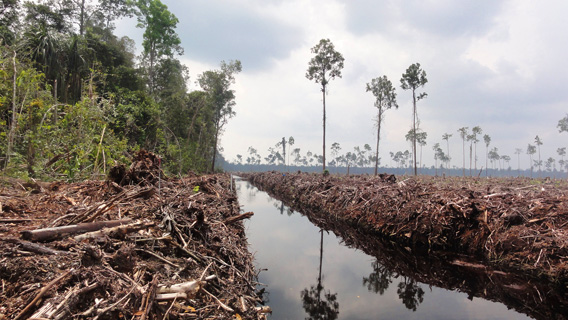 Peat draining and large-scale clearance of natural forest by APP wood supplier PT. Ruas Utama Jaya inside APP’s Senepis Tiger Sanctuary in June and October 2011. Photo courtesy of Eyes on the Forest / WWF-Indonesia, which continues to hammer APP despite its forest conservation policy.

I’m currently seeking ideas on questions to raise during the debate. If readers have anything they’d like to ask APP, its partners, or its critics, please send them my way via email, Twitter or Facebook message. This is your chance to ask the hard questions of APP and I’ll do my best to incorporate your queries into the discussion.

If you’d like further background on APP, check out Mongabay’s pulp and paper feed, which contains most of the 150+ articles I’ve written about the sector in recent years. I’ve included a few key stories below. 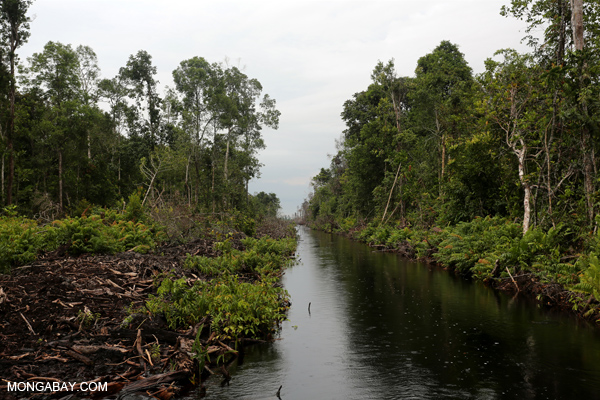 (11/14/2013) Forest loss in Indonesia has sharply risen over the past 12 years, reports a new study published in the journal Science. The study, led by Matt Hansen of University of Maryland, finds that Indonesia lost 15.8 million hectares between 2000 and 2012, ranking it fifth behind Russia, Brazil, the United States, and Canada in terms of forest loss. Some 7 million hectares of forest regrew during the period.

(04/29/2013) In February, Asia Pulp & Paper, one the world’s largest paper producers, announced a forest conservation policy that would effectively exclude fiber sourced through conversion of rainforests and peatlands. The announcement however was met by skepticism by many in the environmental movement due to APP’s failures to abide by previous commitments to avoid rainforest logging.